Wow – May of 1982. I was on the verge of being 10 years old, so probably 2 years away from discovering D&D, three from Tolkien and may five from superhero comic books. My only nerd-cred at the time was probably reading encyclopedias. What I do remember being excited about in 1982 – and begging to get for my birthday – were these new army figures called G.I. Joe. Have you seen these things? They’re like Star Wars figures (which I loved), but military (which I loved)! Awesome! I don’t remember exactly what I got that birthday, but I know I got a few of them, and I think I got the jet pack launch pad thingee. Unfortunately, within just a couple years I was done playing with toys, so I never had more than the originals and Doc. Good times, though!

This cantrip is virtually the same as a phantasmal forces spell in most respects. The caster creates a two-dimensional illusion of whatever he or she desires. If any viewer observes it from an angle of more than about 45° from its horizontal or vertical viewing axis, the nature of the illusion will become immediately apparent. It is dispelled by touch or magic (dispel illusion or dispel magic). The illusion is invisible from the side or the rear. It lasts as long as the caster concentrates upon it. To effectuate the cantrip, the caster must speak a phrase descriptive of the illusion while making a circular motion with his closed hand.

It wouldn’t be until high school that I discovered Warhammer, and thus White Dwarf magazine.

I always dig Giants in the Earth, either because it covers characters I know, or introduces me to new characters. This issue we get C. J. Cutliffe Hyne’s Deucalion, John Norman’s Tarl Cabot and Charles R. Saunders’ Dossouye. While I am aware of Cabot and have read some Saunders, I have never experienced first hand the characters described in this issue. I have, however, read Hyne’s The Lost Continent: The Story of Atlantis, from whence Deucalion comes (well, not really – it’s from ancient mythology really), and I can recommend it. A ripping yarn that, in my opinion, was reminiscent of Conan and such barbarian literature long before REH got his sandaled hero off the ground.

I always wanted one of those Dragonbone electonic dice rollers as a kid. A quick search on ebay revealed none for sale. Oh well – maybe some day.

Next are “Without Any Weapons …” by Phil Meyers and then “… or with a … Weird One” by Rory Bowman. The first has new rules for pummeling in AD&D, the rules for which were never very satisfying and always overly complex. They could have been quite simple, but the gaming zeitgeist of the time was all about complexity – a far cry from the old days when the game was the thing. The later article introduces new weapons for AD&D such as atlatls, blow guns, chakrams, bullwhips, etc. I had no interest in complex fighting rules, but always liked new additions like the weapons article. 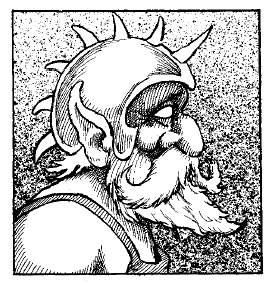 For the gnome-curious out there, Dragon 61 had some groovy articles by Roger E. Moore about the littlest adventurers in AD&D. “The Gnomish Point of View” fleshes out the gnome characters – of course, your campaign may vary from Moore’s ideas, but it was always helpful, especially when I was young, to see how these things could be fleshed out. It is followed up with “The Gods of the Gnomes” – Baervan, Urdlen, Segojan and Flandal. Of course, Garl Glittergold was introduced earlier. I can remember thinking Flandal Steelskin was cool.

“Quest for the Midas Orb” by Jennie Good is the included module in Dragon 61. It was the third place winner at IDDC III, and I’ll admit I don’t know what that is. Here’s the introduction:

“Long ago in the land of Gnarda lived the worshippers of Kalsones, the god of wealth and power. Kalsones was a fair god who treated his followers kindly. As proof of his fairness and kindness in an era long past, he had presented the people with an artifact called the Midas Orb. Legends say if the Orb is held in one hand and another object is touched with the index finger of the other hand, the object touched will turn to pure gold.”

The adventure is a groovy dungeon crawl with some cool ideas in it. Well worth the read and probably well worth the exploration.

The “Dragon’s Bestiary” includes the Firetail by Ed Greenwood, the Umbrae by Theresa Berger, the Light Worm by Willie Callison and the Tybor by Jeff Brandt. Here’s the Light Worm for Blood & Treasure:

Light worms are dungeon denizens with poisonous bites. They look like giant snakes with black underbellies and violet and light blue bands on their backs. The monster’s have two small bumps above their eyes, and stubs on their underside – perhaps vestigal legs. Victims of the light worm’s bite must save vs. poison (at +1 from the first bite, and a cumulative -2 penalty for each additional bite) or die in 1d8 minutes.

There is a 35% chance each round that the worm creates a 20′-diameter sphere of colored lights around victims within 120′. All creatures within the sphere are made dizzy for the first three rounds of their entrapment (-2 to attack, cumulative). In rounds four and five, they are so dizzy as to be incapacitated, and in round six they fall unconscious for 1d10+1 minutes, during which time they are devoured by the monster if at all possible.

The sphere of lights can be generated once every 12 hours.

Light worms are stunned for 1d3 rounds by the sticks to snakes spell, and the spell cancels a sphere of light currently in play.

The Monster Cards described in this issue were really cool. Each one depicts a monster painting on the front, and the stats on the back. If you can find some out in the wild, grab them, cherish them, and use them to kill player characters.

There is an article about introducing aging into the Ringside game, of which I know nothing. It is followed up by the “Jo-Ga-Oh – Little People of the Iroquois” by Conrad Froehlich. These are stats for three “monsters” that are quite groovy.

Gary Gygax has a supplement to Top Secret. Again, I know next to nothing about this game, but I like the level titles for infiltrators – snitch / foist / inside man / plant / ringer / contact / insinuator / penetrator / subversive / infiltrator. Given the title for 8th level, I guess we can assume that’s James Bond’s level. The article also has info on different types of missions, the XP value of them, and other notes.

Boy – What’s New? With Phil and Dixie was just the best when you were in junior high … 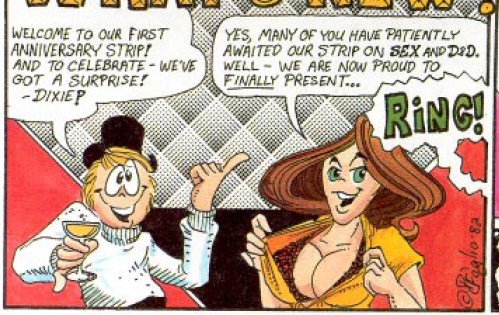 It was fun discovering Phil Foglio’s art in old Star Trek fanzines. Everybody has to start somewhere! 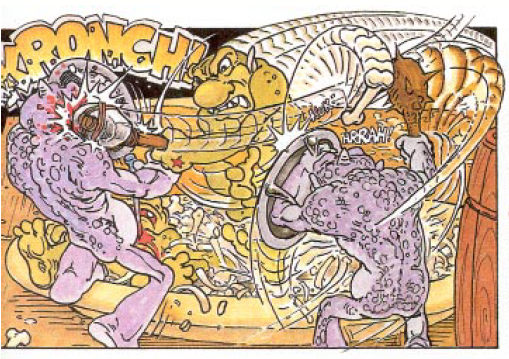 Tramp’s Wormy has some gorgeous artwork – he was just getting better and better!

That, folks, is a wrap! Have fun folks, and please be kind to one another.