Yes, a new class … probably the last new class of 2014 … based on Moses, that fellow who parted the Red Sea and held the Ten Commandments.

At least, it’s based a little on Moses, and a little on other old time prophets. In essence, it’s a non-warrior cleric with more flexibility in terms of spells, but fewer spells to choose from.

In a moment, the class. First, a couple words from our sponsor (which happens to be me)

Two new e-books up on Lulu over the past couple days. The long awaited (well, by me anyways – took me forever to finish it) NOD 24, and the even longer-awaited (again, by me) Bloody Basic – Contemporary Edition. From my descriptions on Lulu.com …

Bloody Basic takes the advanced Blood & Treasure Fantasy Role Playing rules and boils them down to the essentials to make gaming easy, fast and fun. The Contemporary Edition rules include rules for the contemporary races, classes, spells and monsters of fantasy role playing, including automatons, drakkens, gnomes, fighters, sorcerers, clerics and thieves. $4.99 for 44 pages 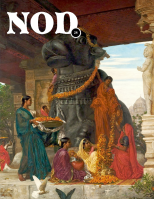 2014 comes to a close with the 24th issue of NOD! In this issue, we continue the Ende hex crawl started in NOD 23, detail some Indian divinities, get into some court intrigue, make monsters with a dictionary, explore the ancient Red Sea as a campaign setting, tangle with space genies, and meet some 1920’s superheroes called the Roustabouts. 80 pages. $4.39 for 80 pages

Wow! What amazing bargains (if you’re into this kind of thing).

Now, back to our program! 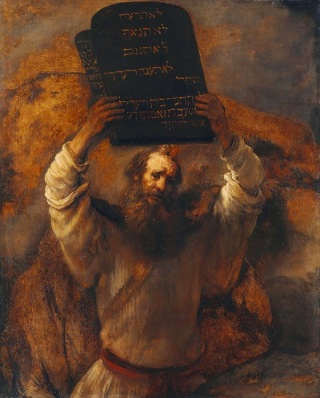 The prophet is a cleric who goes way back … all the way to Moses in fact. The prophet is destined to be a religious leader of a people, if he or she can live long enough. Starting out in life, they are touched by a deity and tasked with leading their chosen people, or converting their chosen people, to their worship. They must eventually lead these people into the wilderness to found a new kingdom for them. The deity in question should be one that is, as yet, minor in stature, or a major deity that has largely been forgotten by his or her chosen people.

Obviously, this class is based on Moses. I won’t go over the story of Moses – it’s easy enough to find – but suffice to say he was a prince who discovered his true heritage and was chosen by God to lead his people through the Wilderness to the Promised Land. As an emissary for God on Earth, he could perform miracles, and as a man that was raised in a royal house, he had a good deal of non-spiritual leadership ability.

The prophet class has an innate ability to commune with the divine, a spell list based on the miracles attributed to Moses, other Biblical prophets and Christian saints. You’ll notice quite a bit of overlap with the normal cleric’s spell list. The prophet begins life as an aristocrat, and that means he has some capacity for fighting and leading people. His leadership abilities will continue to improve as he gains levels, though his fighting ability will improve more slowly. Prophets are not meant to be front-line warriors. A prophet’s spellcasting ability is in some ways more limited than a cleric’s, and in others superior.

Restrictions: Wisdom 13+, Charisma 9+, alignment must be LG, LN or LE

Prophets are trained in the use of all arms and armor, but using arms and armor not allowed to a magic-user represents a lack of faith in their deity, and imposes a spell failure chance on them (cumulative):

Spell failure chance should be rolled when the prophet beseeches her deity for a miracle. If the spell fails, the deity chooses to ignore her.

A prophet does not technically cast spells. Rather, he asks for miracles. A prophet is allowed a limited number of miracles of each miracle level per day. He does not need to memorize or prepare miracles, as long as he has access to a level of miracles, he can ask for any of them. The prophets’ miracles are listed at the end of this article.

Besides adventuring to earn money and power, a prophet’s most important job is to amass followers. To this end, a prophet must preach before multitudes, attempting to either convert them to his new faith, or reawaken them to an old faith. Treat conversion as a Charisma task in which the prophet is skilled.

The prophet can attempt to groups of 0 to 1 HD creatures, or individuals with more than 1 hit dice. With groups, the prophet makes a Charisma task check and, if successful, converts a number of followers equal to his 1d4 plus his level. Difficulties include differences in ethical alignment (law – neutral – chaos) and moral alignment (good – neutral – evil), or the people being strongly dedicated to another faith. The same basic process is used for individuals, with an additional penalty equal to the each level the target is higher than the prophet.

When 0 or 1 hit dice individuals join the prophet’s cult, you might need to determine what they are:

There is a 1 in 6 chance per person that they are wholly dedicated to their new faith, and need never check their morale. Others, however, may lose faith in the face of hardships (as determined by the TK). When this happens, the prophet must make a new conversion task check for each individual. If he fails, they decide to return to their homes and their old way of life.

A prophet must take care of his followers. He must provide food and water for them, protect them, provide some manner of shelter (tents at a minimum), and heal them when they are wounded or sick.

For one minute, the prophet can be in two places at once. Each version of the prophet can carry out movement and actions as normal. The second version can appear within 1 mile per prophet level of the first. When the second version disappears, any damage or other effects he sustained, or any items he took possession of, return to the first version.

One object within 30 feet designated by the caster becomes buoyant in water, and floats to the surface.

By fashioning a roughly human-sized and shaped object out of clay and inscribing a magic sigil on its head, the prophet can cause it to become a clay golem for 10 minutes per prophet level.

This miracle takes existing food and water and multiplies, creating one extra portion per prophet level.

The prophet can go without food, drink and sleep for one day, but must sacrifice one point of constitution to do so. This constitution point cannot be healed while any casting of this spell is in effect. A prophet could, therefore, use sustenance for seven days straight, but would be without seven points of constitution on the seventh day, and would suffer the normal effects of a lower constitution. Constitution points sacrificed for this spell return at the rate of one per day of rest.

The prophet can transmute matter from one form to another, thus lead to gold or steel to adamantine. The effect lasts for 24 hours. At the end of this time, the object must pass an item saving throw (as its original matter) or disintegrate.

If you ever spent time as an American kid in the 1970’s or 1980’s, you surely are aware of Rankin-Bass holiday specials. And back then, they were special. No VCR’s, DVD’s or internet, so you had once chance each year to see Rudolph, and if you weren’t home, you didn’t see it! Egad!

So many holiday specials … and thus so much material to mine for a little RPG nonsense. So, in the spirit of Mother Goose is my Dungeon Master …

First and foremost, we don’t have adventurers in Rankin-Bass D&D. We have “misfits”. Characters in this game are weirdos who don’t quite fit in, and thus leave Santa’s Castle or the Island of Misfit Toys to do some adventuring! Silver and Gold!

Moreover, the DM isn’t a DM. He or she is the narrator, and they have to do the whole game impersonating an old celebrity. Something like The Caves of Christmas Chaos narrated by Sean Connery.

Humans have to be included as a playable race because of Yukon Cornelius. Other options could be elves (shorter than the traditional D&D elves) and reindeer (definitely a candidate for “race as class”). How about toys? Winter sprites? Lots of options there.

The bumble, King Moonracer (a shedu), giant vultures, town guards, elemental misers and their miserlings (mephits fit the bill very nicely for these guys), keh-nights (mechanical knights from Jack Frost) – many options here. Rankin-Bass adventures seem to be more centered around big villains with a collection of minions around them. That villain had better be threatening Christmas or New Years, too, or what’s the point?

You’re just loaded here. The North Pole, with Santa’s Castle and the reindeer caves and Yukon’s peppermint mine is a good home base. Burrow heavily from Candy Land and get a candy cane forest and gumdrop mountains. The Island of Misfit Toys is nearby, with its Shedu ruler King Moonracer. The weird Sea of Time that shows up in Rudolph’s Shiny New Year could and should be the site of a mega-campaign all on its own. Seriously – if you haven’t watched it, watch it. Great imagination fuel. You can go further afield with the Holy Land, Sombertown (apparently somewhere in Central Europe), the Russian Steppe and its Miserable Mountain, Southtown, etc. 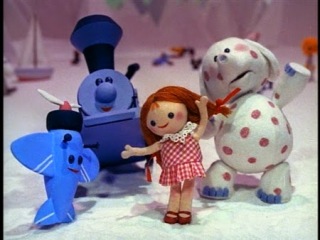 It’s Christmas Eve, and your friends are over. Pull out Basic D&D or one of its clones, pick a place to adventure, make up a villain or bring back Burgermeister Meisterburger or Kubla Kraus, figure out how they’re trying to screw up the holidays and then roll up some elven dentists and human knights and jack-in-the-box whatevers and get to adventuring.

Oh, and don’t forget to put a little of that goodwill towards men in your hearts. Share your +1 short sword. Don’t be stingy with the healing potions. Give a little love, and get a little love back. It is Christmas, after all.

And no pouting and shouting if your character dies. Santa’s got his eye on you!

Note – All images are the property of their copyright owners. No intended infringement in this post – just a bit of holiday fun.