Rocky Jones, Space Ranger consists of 39 episodes broadcast in syndication in 1954. Although not as popular as Tom Corbett, Space Cadet (1950-1955) or Space Patrol (1950-1955), it has the benefit of all of its episodes surviving to the modern day. All three series were aimed at children, but Rocky Jones didn’t play down to the kids, and it lacked some of spaceman elements that its rivals did. It seems to me as a bridge between Flash Gordon/Buck Rogers and Star Trek. Despite a lack of longevity, Rocky Jones did get some merchandise and a few comic book stories.

Rocky Jones had some pretty good special effects for the time period (and budget), some decent acting (I especially like Richard Crane’s calm and collected depiction of Rocky Jones – I’ve heard he was among the actors considered as captain of old NCC-1701) and a few decent stories. It also had pretty good continuity – when characters left, they were not forgotten. When a moon joins the United Worlds in one episode, a representative of that moon appears in a later episode at a conference.

Side Trek – One of those lost characters was Winky (presumably a nickname), Rocky Jones’ first assistant. Winky was played by Scotty Beckett, best known for being in the old Our Gang comedies. Winky made it through 26 seasons before Scotty was thrown in the clink on a concealed weapons charge.

Rocky Jones is set almsot entirely within the Solar System. It is worth noting here that scientific realism is not a strong suit of Rocky Jones, or any other kids sci-fi series (or, frankly, any of the Star Treks if we’re honest). The Space Rangers are headquartered on Earth, under the direction of the Secretary for Space Affairs Drake. From there, they patrol the United Worlds of the Solar System. Some episodes send the crew beyond the Solar System to Una and Alpha Centauri.

In the early episodes, Rocky captains the XV-2 Orbit Jet. When it is destroyed in one episode, he is given command of the XV-3 Silver Moon. Both craft are identical. In one episode the XV-12 is mentioned, so there is presumably at least 12 vessels in the Space Rangers’ fleet.

These ships have the traditional rocket ship look, and can land directly on planets. They are perhaps 130 to 150 feet long/tall. The vessels are equipped with rocket launchers or missile launchers, a “cold light” mechanism which we would know as a cloaking device, and a primitive form of universal translator (you have to speak into it so others can understand you on a paired device). The ships are nominally crewed by two, a pilot and co-pilot, but Rocky also had Vena Ray in his crew as navigator and language specialist, and Bobby, presumably a cadet, and Professor Newton or Mayberry were usually along as well.

The space vessels had a cockpit, an adjoining room with chairs to facilitate blast-offs and equipment used by Vena for navigation, and an additional room that may have been for storage. These rooms always appear to be “upright”, whether the ship is vertically or horizontally oriented. Artificial gravity – a rotating capsule – lazy set design – we’ll never know.

Before one of these vessels was launched, it had to be charged. A Star Trek fan could imagine the vessel being “charged” with anti-matter to allow it to generate enough energy to warp space. The quick journey to Alpha Centauri suggests that the XV-2 and XV-3 could warp space.

A few space stations, all of the ring-and-spokes variety, appear in the series. They are not massive, and apparently have a single operator.

I really dig the uniforms worn by the Space Rangers. We see a field uniform in the series that consists of a white undershirt, jacket, trousers and cap, and a dress uniform that reminds me of Kirk’s fancy uniform in Star Trek: The Motion Picture. Both are well-designed. Secretary drake wears a uniform unique to him. We see three rank insignia in the show, consisting of a low rank with one “stripe”, a high rank of three “stripes” and the wide bar worn by Secretary Drake. Presumably there is a middle rank with two “stripes”. The ranks could be something like lieutenant – commander – captain.

Rocky and Winky in field uniforms without jackets

The Ophicians and Herculons have their own consistent uniforms. I meant to draw them all, but frankly did not have time. Look for a future addition to this post.

Rock Jones (Richard Crane), the principal character, is a level-headed, serious leader. He never came off as a parody to me – no grand speeches or easy victories, but a skilled, determined guy who sees things through to the end.

Rocky is first assisted by Winky (Scotty Beckett), who was a wise-cracker, but perfectly competent in his job. When Winky left the series, he was replaced by Biffin “Biff” Cardoza (Jimmy Lydon), an inhabitant of the friendly planetoid Herculon as part of an exchange system.

Vena Ray (Sally Mansfield) was a civilian whose brother was a member of the Space Rangers. Conern for her brother brought her onto the crew as navigator. Rocky wasn’t thrilled with this addition at first, but happily included her when he discovered how good she was at the job. 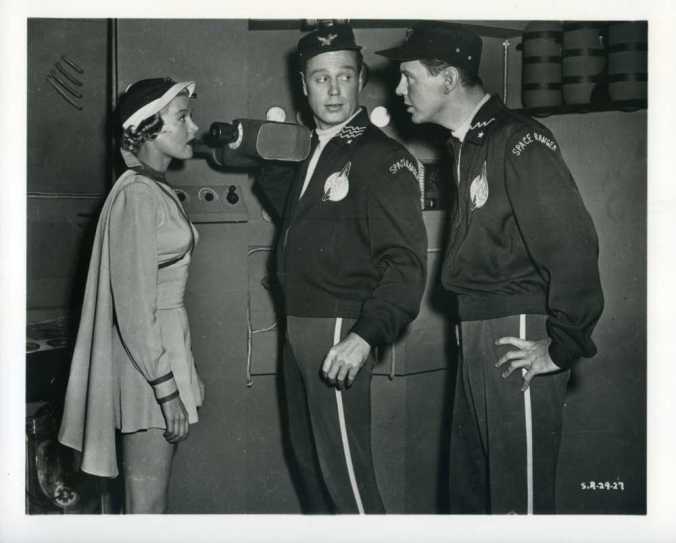 Bobby (Robert Lydon), presumably a cadet due to his young age, was often taken along as a valued team member. In early episodes, Professor Newton (Maurice Cass) served as the ship’s science advisor. When Cass passed away, Professor Mayberry (Reginald Shieffield) took over.

Leading them all is Secretary Drake (Charles Meredith), head of the office of Space Affairs. Drake is a fatherly sort, who treats his underlings more like family than employees.

All is not peace and harmony in the Solar System. Opposing the United Worlds in the early episodes is the planet Ophicius, head of the Ophicius Group, under the reign of its Suzerain Cleolanta (Patsy Parsons). While Cleolanta had a yen for Rocky Jones, she was always plotting against the United Worlds. Assisting her were the likes of Atlasande (Harry Lauter), her chief aide.

Rocky later visits the twin gypsy moons of Negato and Posito, where he tangles with Bovarro (John Banner), the blowhard ruler of Posito until that moon crashes into Ophicius. And yes, it is the same John Banner would would play Sgt. Shultz on Hogan’s Heroes.

After Rocky and the Space Rangers evacuate Ophicius and Posito, the Positoans are apparently re-settled on the plantoid Herculon. Bovarro’s daughter, Juliandra (Ann Robinson), becomes Suzerain in place of her evil twin sister, Noviandra. Side note – I have to admit that I though Juliandra was smoking hot.

Perhaps the most fun villain was the egotistical coward Pinto Vortando (Ted Hecht). Pinto begins as a villain, becomes a bum on the moon Ankapor after his defeat, and ultimately becomes an ally of Rocky Jones and the Space Rangers. Pinto always refers to himself in the third person.

A Rocky Jones-inspired campaign would never have to leave the Solar System. The series mentions a few real places, many imaginary places that could be renamed moons or planetoids, and at least one completely made up moon of Mercury.

As mentioned above, scientific realism is not high on the series’ list of accomplishments, so places far from the Sun and much smaller than Earth manage to have habitable climates and normal gravity. I guess it can all be explained with the magic of future technology. A few of the more notable spots (and my guess for where they could be located) follow:

Mars is mentioned in the series, though never visited. It has humanoid inhabitants, as well as mammoths. I imagine a world of cold, red grasslands, where primitive Martians once hunted their mammoths the way ancient Siberians did.

Saturn has two inhabited moons. Enceladus (Saturn-2) is mentioned to have a tropical climate. Titan (Saturn-6) is mentioned as the place where a criminal named Mickey Simpson was arrested. Since Mickey was held at Space Ranger’s HQ, we can presume Titan was a member of the United Worlds.

Venus is also inhabited, though never visited in the series. It appears that Venusians are not humans, though they are humanoid.

Jupiter has a few inhabited moons, though you won’t find them in any text books. Fornax is visited in “Bobby’s Comet”. The people dwell underground, and have a slightly Ancient Egyptian/Middle Eastern vibe to their clothing. Their planet has a crystal that can be used to power spaceships … dilithium, maybe? It is ruled by Zorovak. Another moon, Positta, is described as a great place to visit for 24 hours. 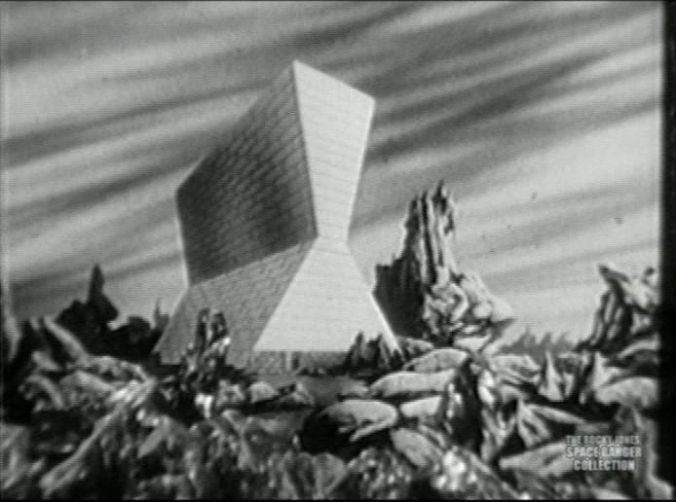 Ankapor also has an underground civilization. Not a part of the United Worlds, it hosts many ne’er-do-wells. I could see it being the same as Ceres in the asteroid belt – a marketplace located between the inner and outer worlds.

Apollo Minor is a moon ruled by Pinto Vortando. After his overthrow, it joins the United Worlds. It is located on the fringes of the Solar System.

Cylenus is a planetoid or moon where the Ophicians captured Bobby and Prof. Newton.

Hermes is a planetoid on the fringes of the Solar System that is pulled out of orbit by the magnetic power of Regalio.

The planet Medina is ruled by the villainous Agar and his kindlier sister Yara.

Ophicius is called a planet, and has an Earth-like climate/atmosphere, but when Secretary Drake notes it on the map in his office it appears to be a moon of Jupiter. The location of New Ophicius, after its collision with the gypsy moon Posito, is anybody’s guess.

Prah is a planetoid supposedly impossible to land upon. It hosts a gang of space pirates.

Torida is the uninhabited moon of Mercury.

Rocky also visits an unnamed moon on the fringes of the Solar System in “Blast Off” – maybe my favorite series of episodes in the series.

Three places outside the Solar System are mentioned in the series. The two most important are Regalio, a planet orbiting Alpha Centauri (and the furthest a Space Ranger has ever traveled), and Herculon. Regalio does not have atomic power, but rather has perfected magnetic power. It is ruled by a Nizam. Herculon orbits Una, a star located between Sol and Alpha Centauri, which if we’re picking a real place means Una is Proxima Centauri. It is ruled by Suzerain Juliandra, daughter of Bovarro.

I really enjoyed this series. I started exploring it when I was prepping my personal Star Trek campaign. With a few small changes, it could serve as Star Trek’s past. You have to figure the kids who watched Rocky Jones were probably the young adults who watched Star Trek. Although aimed at children, the show managed a few interesting episodes. It was action-packed and fun, and I highly recommend watching a few episodes. If you think you’ll be bored with it, try one of the stories done on MST3K.