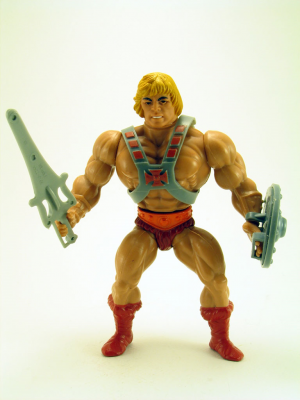 When I was about 10 years old, Mattel introduced its He-Man toy line. I remember going over to a friend’s house to see the entire original line, which his grandparents had bought him for Hanukah. If I’m honest, they didn’t do much for me. I was a freak for G.I. Joe and military stuff at the time, and really had no interest in swords and sorcery. As a result, I never had an interest in He-Man. I mostly saw it as a cheap Filmation cartoon. It would still be two or three years before a chance meeting with Tolkien’s The Two Towers and Dungeons & Dragons would get me interested in the fantasy genre.

Fast forward to adulthood. What did not interest me as a G.I. Joe-loving kid now does interest me as a weird retro-loving adult. I can now appreciate just how bizarrely creative Mattel’s toy makers were with the MOTU line, and I can even appreciate the cartoon, though more by way of laughing at it (gently and with love) than of thrilling to the adventures of He-Man (who I just now discovered shared his voice with Morris the cat – even weirder).

Over the last couple weeks, I’ve been watching a He-Man cartoon at night before bed to unwind, and in addition to the entertainment value I’ve been inspired to write a few spells that will find their way into Esoterica Exhumed. Here’s a sample:

One animal targeted by this spell becomes a battle beast, doubling its size and Hit Dice, and increasing its damage rolls by +2 points for the duration of the spell. While under the effects of the spell, the animal is treated as a monster rather than animal, and its coloration changes to something weird and unearthly. The animal gains limited sentience and low intelligence in battle beast form.

One creature immediate in front of you is dazzled by a sudden intense light that flashes from your eyes. The victim is blinded for 1 rounds, and then dazzled for 1d6 rounds. A dazzled creature suffers a -1 penalty to attack rolls and to all task checks involving sight.

This spell causes those caught in the area of effect who fail a saving throw to be dazzled, suffering a -1 penalty to attack rolls and all task checks involving sight.

You can cause the ground to suddenly disappear, shifting it briefly into the elemental plane of earth. The resulting chasm has the following dimensions: Width is equal to 5 feet plus 2 feet per level; length is equal to 1 foot per level and depth is equal to 2 feet per level. After 10 minutes, the earth shifts back into position from the elemental plane, burying anything that was in the chasm or displacing gases and liquids (such as water or an obscuring mist spell) that might have been in the chasm to the surface.

You conjure three miniature comets which orbit you at a radius of up to 10′. While orbiting, they provide a +1 bonus to Armor Class. Melee attackers that miss their attack roll against you by only 1 point are struck by a comet for 1d6 damage + 1d6 fire damage. You can also send these comets streaking out at a single target, who can avoid it with a saving throw. Targets that are hit suffer 2d6 damage + 1d6 fire damage.

Once a magic-user has placed this spell on a nonliving item, she can, with mild concentration and while rubbing the temples, discern its location relative to her in terms of direction and approximate distance. This homing beacon is permanent, but can be removed with dispel magic or suppressed while in possession of a creature with magic resistance (dice to determine).

With the lifting of your arms, a pillar of solid rock rises from the ground. The ground in question must be solid – i.e. there must be rock to form into a pillar. The pillar rises 5 feet plus 1 foot per level, and is roughly 4 feet in diameter. The pillar can be raised under a creature’s feet, in which case they must pass a saving throw to avoid being lifted. If they fail this saving throw, they are carried upwards and could potentially be crushed if the pillar’s height plus their own would force them to violently contact the ceiling of a chamber or cavern. If they are crushed, they suffer 3d6 points of damage. After one hour, the pillar slides back into the ground. This spell can conceivably be used to raise buried treasure to the surface, but the soil in which the treasure was buried forms into solid rock and therefore may make the treasure difficult to access.

The magic-user can stuff 100 pounds per level worth of non-magical, non-living goods up his left sleeve. After 8 hours, the magic-user must dump the goods out of his sleeve or they disappear into dimensions unknown.