Here’s a little idea that just popped into my head that I thought folks might find useful when one needs to generate a NPC personality on the fly with very little to go on. It works on the idea of, for lack of a better term, stereotypes.

In D&D – heck, in so many things – there is a general conception of what an elf or dwarf or magic-user (etc.) should be. Maybe these ideas come from the game books or other pop culture, and maybe they change over time, but they do exist. Take elves, for example. Lots of RPG’ers have an idea in mind of how an elf behaves and what they look like. Consider this as, rather than a stereotype, an ideal. The ideal elf in old D&D was 5′ tall, Chaotic Good, came from the woodlands, etc.

How many elves, though, live up to this ideal? Perhaps, when an elven NPC shows up, we can roll a dice, perhaps a good old fashioned d6, to find out how close the NPC is to the ideal. Maybe a “6” means we have the perfect elf in front of us. But for every point lower than a “6”, we dial that elf one step from the ideal.

Here’s where we get free-form with this thing. The ways in which the NPC differs from the elven idea is up to the DM. Say we roll a “5”. We have an almost ideal elf, but he differs in one particular way. If we think of elves as having happy personalities, maybe our elf is morose. Maybe he doesn’t come from the woodlands, but instead the coasts. Maybe he’s a step away from Chaotic Good – Neutral Good or Chaotic Neutral. Maybe he’s stout instead of lean, dresses in scarlet instead of green – whatever your conception of an elf is, this guy doesn’t quite live up to it.

Roll a “3” for a dwarf, and he differs from he dwarven idea in 3 ways – he’s Lawful Neutral, lean instead of stout and is funny instead of dour … or he has auburn hair, prefers the woods to being underground and thinks elves are groovy.

A simple d6 roll, an idea of an ideal, and a little imagination to get a memorable NPC.

Mike Connors recently passed away. He’s best known for playing Joe Mannix, private investigator, on the TV show Mannix, which ran from 1967-1975. Great show, and one of my all-time favorites. It was also an odd duck for its time because it forewent the idea of a detective with a gimmick (fat, wheelchair-bound, old, etc.) and just created a detective in the hard-boiled tradition.  James Rockford was probably Mannix’s spiritual successor on television.

R.I.P. Mike Connors, and thanks for the fine entertainment.

Equipment: Colt Detective Special (1d6), 1975 Chevrolet Camaro (in the show’s final season, but Mannix drove an astounding array of cool cars over the course of the series – check Wikipedia’s entry for a list) 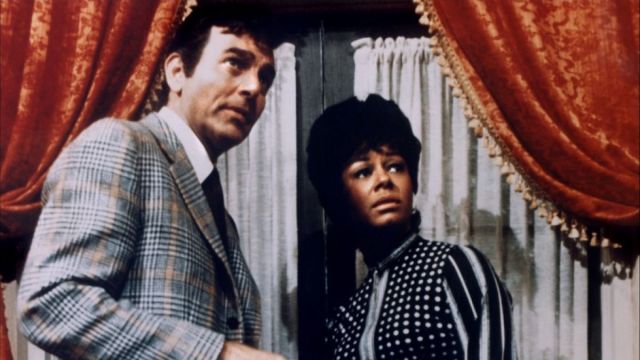 Today is Veterans’ Day (formerly Armistice Day) in the U.S. of A. First and foremost, I offer my thanks to those who have served – God bless you.

Since this is a game blog, I now offer Grit & Vigor stats for a couple genuine war heroes, Sgt. Alvin York and Audie Murphy.

Alvin York was an odd choice for military heroism. When he reported for military duty during the First World War, he let his superiors know that, as a Christian, he didn’t believe that he could take part in fighting.

After many discussions with the camp chaplain, and a lot of soul searching, he finally decided that a Christian could fight if called to do so. With that, he was off to Europe, where he soon earned a Medal of Honor for, according to Wikipedia, “leading an attack on a German machine gun nest, taking 35 machine guns, killing at least 28 German soldiers, and capturing 132 others”.

What Audie Murphy did in real life would seem unbelievable if you saw it in a movie. Serving in the U.S. Army in the Second World War in Italy, he took part in many distinguished acts of heroism. Via Wikipedia, here’s what earned him the Medal of Honor:

“The Germans scored a direct hit on an M10 tank destroyer, setting it alight, forcing the crew to abandon it. Murphy ordered his men to retreat to positions in the woods, remaining alone at his post, shooting his M1 carbine and directing artillery fire via his field radio while the Germans aimed fire directly at his position. Murphy mounted the abandoned, burning tank destroyer and began firing its .50 caliber machine gun at the advancing Germans, killing a squad crawling through a ditch towards him. For an hour, Murphy stood on the flaming tank destroyer returning German fire from foot soldiers and advancing tanks, killing or wounding 50 Germans. He sustained a leg wound during his stand, and stopped only after he ran out of ammunition. Murphy rejoined his men, disregarding his own wound, and led them back to repel the Germans. He insisted on remaining with his men while his wounds were treated. For his actions that day, he was awarded the Medal of Honor. The 3rd Infantry Division was awarded the Presidential Unit Citation for its actions at the Colmar Pocket, giving Murphy a Bronze Oak Leaf Cluster for the emblem.”

This was after several bouts of malaria and losing a bit of hip muscle to gangrene. Murphy left the U.S. Army as a first lieutenant, and later achieved the rank of Major with the Texas Army National Guard.

Happy Veteran’s Day to all you veterans! 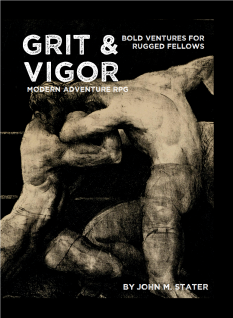 After a week away from work (the real job), I’m back delving into the wonders of the Las Vegas real estate market. Over the past nine days, I managed to almost finish NOD 29 and got some heavy work done on my World War II supplement to GRIT & VIGOR. I also watched some B-movies, did some yard work, got the hard copy of MYSTERY MEN! Second Edition created and ordered a proof copy (it’s going to be in color), found some cheap old AD&D artifacts at a used record store, watched my daughter in her first Shakespeare play (she played the nurse in Romeo & Juliet) and didn’t shave.

I also didn’t do any blog posts, though I did keep in touch with the gaming community via Google +. For those who didn’t see that, I present two characters for GRIT & VIGOR, one a character from an old movie, the other an actor. For those who did, I’ll throw in a third character – a dangerous lady.

Vince Kane – A Character You Probably Do Not Know

Vince Kane is the main character in an old George Raft picture called A Dangerous Profession (1949). It’s not a great movie, but a movie doesn’t have to be great to inspire usable game material. The beauty of B-movies and simple stories is that they’re usually easier to adapt into modern game scenarios. Much of what makes a movie great – strong characterizations, interesting character relationships, etc. – does not always translate well into a game, or at least should come from the interaction of the players and game master, rather than be programmed and forced on everyone. A good game often revolves around a good plot that is not too hard to follow, since players are usually grasping around in the dark during game play. Vince Kane is also an interesting idea for an detective who isn’t technically a professional detective, much in the way that Matlock and Perry Mason are detectives who are technically lawyers.

Vince Kane is an ex-cop turned bail bondsman. Things heat up when a buddy of his from the police force, Lt. Nick Ferrone (played by Jim Backus) picks up Claude Brackett, who skipped bail a few years back for an embezzlement charge. Checking Brackett’s room, Kane discovers that he’s in town with the woman who broke his heart, who turns out to now be the embezzler’s wife, Lucy Brackett. When Claude Brackett turns up murdered, Kane investigates and discovers a web of lies.

Hoot Gibson, A Man More Interesting than His Characters

Now we shift from a character to a real person who was, himself, quite a character. It’s not too often you come across an actor’s biography which is more interesting than the characters he played. Hoot Gibson is one of those fellows.

Hoot started riding horses as a boy in Nebraska, and after the family moved to California he started working on ranches. He showed a talent for it, and soon started competing in rodeos, winning several honors. It was during his rodeo days that he started acting in silent movies. After a stint as a sergeant in the Tank Corps in World War I, he went back to rodeo and movies, usually as a bit player and stunt rider. In 1922, when demand was high for cowboy pictures, he moved into starring roles and made a whole slew of pictures. Hoot also learned to fly planes and even got injured in a crash while racing planes.

I don’t know how much cache’ the gangsters of the Depression have these days with the young people, but they once had a standing approaching folk heroes. Bonnie and Clyde, ‘Baby Face’ Nelson, John Dillinger, etc. And then there’s Ma. Ma Barker. Ma Barker had four criminal sons, Herman, Lloyd, Arthur and Fred, and served as their ring leader … or did she?

From the sound of it, Ma Barker as criminal mastermind of her sons’ foul play is the bunk. One gangster, Alvin Karpis, described her as “superstitious, gullible, simple, cantankerous and, well, generally law abiding.” She was clearly an accomplice in the criminal activities of the gang, helping them before and after crimes, but probably was not the gun-totin’ mama of popular culture. When J. Edgar Hoover described her as “the most vicious, dangerous and resourceful criminal brain of the last decade”, he was probably full of shit. I know – J. Edgar Hoover, an agent of the federal government – lying is hard to believe.

But in GRIT & VIGOR, when truth isn’t stranger than fiction, we slap it around a little until it is. Our Ma Barker is the gangster of the movies, engaging in gun play and maybe even chomping on a cigar while her minions rob banks.