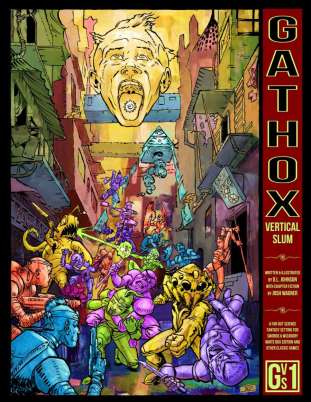 I have recently been given the priveledge of perusing Gathox Vertical Slum by its author and artist, David Lewis Johnson. For readers of this blog who also read my NOD magazine, Johnson should be well known, as his art has graced many issues of NOD (and will grace many more, God willin’ and the crik don’t rise).

I approach game materials in two ways – as stand-alone, run-as-written products (i.e. can I grab it off the shelf and run with it) and as tool boxes. David’s book, I am happy to say, works well in both in capacities.

As a “module”, it is fantastic. A well-developed city, incredibly imaginative with new things around every corner, that can play host to all sorts of adventures. Explorers will not be bored in Gathox, and players who like mysteries, puzzles, interaction and, of course, fisticuffs, will find plenty to do in Gathox provided their referee knows what he or she is doing. While Gathox is fully fleshed out and ready to go, I think one could also make modifications as needed for their group.

I also appreciate the fact that Gathox, as designed, can be dropped (almost literally) into any campaign and a wide variety of games, from pure fantasy to sword & planet to post-apocalyptic to sci-fi. The city is a wandering entity, you see, and it could show up in the World of Greyhawk just as easily as my Nod campaign world or wherever you happen to play.

As a toolbox, Gathox has all sorts of goodies between its covers. There are new and very imaginative monsters, a pretty boss little mutant class and clever rules for running competing gangs in a city setting. The rules as written are compatible with old school games of the D&D variety, so it should be as easily converted to other systems as other old school games.

Gathox Vertical Slum is published by DIY RPG Productions (just look for the sign of the flipping bird), with chapter fiction written by Josh Wagner and editing and layout design by Mike Evans. It is a well designed book – easy on the eyes, easy to read and well organized. Johnson’s art is great (but hey, obviously I’m biased there) and the fiction does a great job of conveying the intended feel of the setting.

Folks, I give David Lewis Johnson’s Gathox Vertical Slum my highest recommendation. It’s a great book – so great that I’m going to shell out some hard currency for a physical copy. I have some 5E D&D-ers that might get a fun surprise if they walk through a shimmering portal one day in the depths of Stonehell.

You can grab a copy (and I recommend you do) HERE.