I wind up my little Rainbow Fantasy series of tributes to children’s TV fantasy action shows with a class based on probably the two best such shows, He-Man and the Masters of the Universe and She-Ra, Princess of Power.

Champions are warriors that draw their power from an oath to defend a Lawful place, institution or divine entity. They often appear as shining knights, and preach a philosophy of mercy, honesty and generosity. Although implacable foes of Chaos, they are not killing machines; a champion would prefer to subdue evil or convert it to goodness if possible, rather than simply slay it.

To be a champion, a character must have the following minimum scores: Str 9, Wis 11 and Cha 13.

Champions must be Lawful in alignment. They can use all armors, shields and weapons.

A champion who ceases to be Lawful or whom grossly violates the champion’s code of conduct (see below), loses all special abilities, including the services of their mount (see below). The fallen champion may not progress any further in levels as a champion until she atones by gaining enough experience to gain another level without the use of her special abilities and while acting in perfect accordance with his alignment and code of conduct.

Champions add their level to the following task checks:

Healing—Champions are knowledgeable about applying bandages, mending broken bones and compounding medicines, unguents and tinctures. They can stop wounds from bleeding, and with a successful check grant a +1 bonus to save vs. ongoing poison and disease.

Riding—Champions are capable of fighting while mounted at no penalty, and can use this task for dangerous (and awesome) stunts.

A champion must take a sacred oath to a Lawful cause or entity. Her sword (or other weapon) becomes a symbol of this oath. If a champion comes into the possession of a better weapon, she may transfer her oath to it.

A champion is immune to disease, and can cure disease once per week per 5 levels attained. Her touch can calm emotions (as the spell) three times per day. Comrades adventuring with a champion receive a +2 bonus to save vs. mind-affecting effects.

A 2nd level champion can heal wounds (her own or those of others) by touch. This is called the “laying on of hands”. Each day she can heal a total number of hit points of damage equal to twice her champion level. She may choose to divide her healing among multiple recipients and she does not have to use it all at once.

A 3rd level champion gains the ability to amplify her heroic powers once per day by invoking her sacred oath while holding aloft the weapon on which she took her oath. This exact form of this amplification can be chosen by the champion. To simulate this, the champion receives a number of Power Points equal to her level divided by two (rounding up) per day. One power point can be spent to gain a +1 bonus to attack or save or a +2 bonus to Armor Class or damage or a +10′ increase to speed. These power-ups last for 10 minutes. Three power points can be spent on an augury, strength or haste spell effect with duration as the spell’s in question.

A 4th level champion can undertake a quest guided by a divine vision to find and gain the service of an unusually intelligent, strong, and loyal mount to serve her in her crusade against evil. This champion can choose from one of the following mounts: Celestial warhorse, pegasus, spotted lion, tiger or unicorn (female champions only). Treasure Keepers can add other animals to this list as they wish.

The mount and its location appear in a vision. The location is no more than a week’s ride away, and the challenge involved in claiming it should be difficult but not impossible.

A 9th level champion can swear fealty to a Lawful outsider, becoming their agent and champion on the Material Plane. The champion is charged to defend a Lawful realm under the protection of the outsider in question. To aid her on her quest, the champion gains the services of 1d4+2 followers. Roll on the following table to discover what sort of followers the champion attracts:

A 12th level champion may conquer an evil stronghold and sanctify it for her own use or simply construct a stronghold of her own. The stronghold must be a symbol of goodness for all the land, not just a mere construction of stone and metal. When a champion occupies a stronghold, she adds 1d4+2 more followers to her retinue, plus 60 Lawful men-at-arms of a type determined by the champion.

Champions live their lives by a code of virtue, and must also abide the following strictures:

• Must always seek to knock foes unconscious rather than killing them – killing is a last resort.

• May not retain more wealth than needed to support herself, her henchmen and to maintain her castle.

• May only employ Lawful henchmen. Champions may adventure with non-Lawful characters, but must make at least a small attempt to reform them, and must, at the end of each adventure, explain how that adventure taught a sound moral lesson.

Besides these rules, champions must abide by a code of conduct that demands honesty, mercy and generosity above all things. 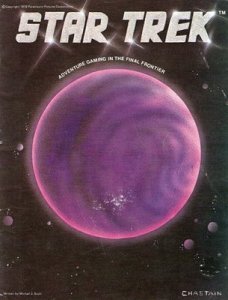 Playing around on the Internet Archive recently, I came upon some old issues of Different Worlds magazine. This was a magazine I was unaware of in my youth, and I’ve enjoyed looking at another take on the RPG world in its infancy. One article in particular, “Kirk on Karit 2” by Emmet F. Milestone in issue No. 4 (1979) brought to my attention the first licensed Star Trek RPG, Star Trek – Adventure Gaming in the Final Frontier. I did a little hunting, and found a copy for sale, and I’m glad I did.

Written by Michael Scott in 1978 for Heritage Models to support their range of Star Trek miniatures, Star Trek (which is what I’ll call it from now on in this review to save time and space) is a dandy little game – very old school, very rules lite. In fact, some folks seem to think it a little too rules lite, but not me. I love discovering these little games from the hobby’s origins, because they remind you just how much you can do with a very light rules set.

Here are a few highlights – 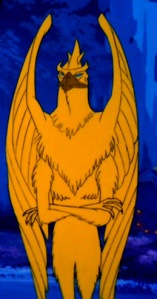 The game is very focused on its mission, which is to simulate Star Trek landing parties – I think it does this pretty well. In fact, you could spin this thing into doing Star Trek dungeon crawls with very little trouble.

Being written in 1978, it is all original Trek, including the animated series, which I really dig. This means you get stats for creatures like the K’zin and Skorr.

The rules are really simple – in the basic and advanced versions – and meld pretty well with old school D&D. The six ability scores are Strength, Dexterity, Constitution, Charisma, Luck and Mentality. Not too difficult to track those to D&D. Ability scores range from 3 to 18 (3d6). Characters get a modifier that is positive for every point a score is above 12 and a negative for every point a score is below 9. They also have a hand-to-hand combat value and equipment. In th basic game, you play one of the characters from actual Star Trek – Kirk, Spock, McCoy, etc. In the advanced game you can roll up a character yourself.

Combat is simple – roll 1d6 to attack, adding strength, dexterity and hand-to-hand bonus to determine total potential damage while the defender subtracts 1d6 plus luck and hand-to-hand modifiers. The resulting damage, if there is any left, is deducted from the defender’s constitution score. If damage equals more than half of the character’s remaining constitution, they are knocked out. Ranged combat is a little different, but just as simple – you have to roll below a number based on your dexterity score, with modifiers for a few common situations. Damage is based on the ranged weapon used.

The advanced game has more hand-to-hand weapons, which involve rolling more d6’s for the attack, and armor to reduce damage suffered.

Skill checks are a roll of 3d6 which must be less than or equal to whatever ability score makes the most sense. If Spock is trying to use his tri-corder to pick up signs of life, he makes a roll against his Mentality. Easy … but I would personally change it to a d20 roll rather than 3d6.

There is no experience point or leveling system in the game, but the author mentions that as characters succeed in adventures their hand-to-hand rating can improve or they can get bonuses to certain tasks. I like the idea of advancement being kind of arbitrary, though you would need a good Mission Master to keep things from getting out of hand.

The game has stats for all sorts of Star Trek monsters – again, a Trek dungeon would probably be lots of fun. Given that Kirk and Spock had to deal with ancient Rome, the Roaring ’20s and the Old West, a dungeon crawl would not be too outrageous … and nicknaming the hirelings “red shirts” would be entirely appropriate.

Spock: “I use my tricorder to scan for life forms on the other side of the door.”

Kirk: “I bust open the door and somersault into the room.”

I really grok how simple this game is – you can pick it up and get going within minutes if you have players who understand the basics of role playing games and Star Trek. I especially love that it instantly lit a fire in me to play it and play with it – why not work up quick stats for Doctor Who characters and creatures, or Star Wars or Next Generation or whatever – it would be so easy!

If you get a chance, check it out. Expect simplicity, “rulings not rules” and lots of thinking on your feet, but also a game that you can get up and running quickly.

Also – check out that article I mentioned above – Emmet F. Milestone came up with a dandy little scheme for characters falling in love with one another – a must if Kirk is in your boarding party, though as Emmet often remarks, “Kirk has no luck in love, so his Luck modifier is never added in a Romance Roll”. I instantly want to use this in my next D&D dungeon crawl.