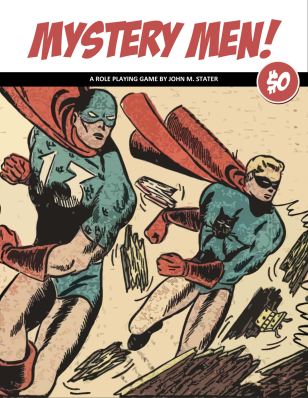 Two years ago to this day, I announced that Fat Goblin Games was going to produce a revised version of Mystery Men!, with new art, new layout, etc. To that end, I pulled the existing version off the digital shelves.

Well, 730 days later, the revised Mystery Men! did not materialize. I took a stab at a collaboration, and in this case it didn’t work out. Chalk it up to earned experience (without a 10% XP bonus because of my low Wisdom score).

Fortunately, my contract with those folks is over, and Mystery Men! is back. I have re-instated the original MM!, digital and print, to my spotlight on Lulu.com. As before, the PDF is free, the print version costs $7.99.

You might want to hold off on buying the print version, though, because the next step is the official, long-awaited revision of the game, which will be released in early 2016. I need to get GRIT & VIGOR on sale first, partially because I just need to get it done, and partially because I want to make sure MM! and G&V are generally compatible. Once it is out, I will tweak the revised text I wrote two years ago, work on the layout, and get that sucker up for sale. I’m hoping for January release.

2016 is going to be my year of revisions. Mystery Men! will probably be first. Blood & Treasure will follow, with new covers I commissioned, as well as Pars Fortuna (I was going to make it Blood & Treasure-compatible, but I might make it Bloody Basic compatible, since those games have a similar vibe) and Space Princess (aiming at G&V compatibility for that one as well). In the meantime, I’ll keep publishing NOD and Quick & Easy games, and I’ll begin working on combining old issues of NOD into full-blown hex crawl adventures in their own right, and pulling those old mags off the market to let them become collectors items. I’m also in talks with a friend to design a nice, new Land of Nod website. Should be fun.

So keep your eyes peeled, folks, the mystery men are on their way!

13 thoughts on “Mystery Men – Out of the Shadows”