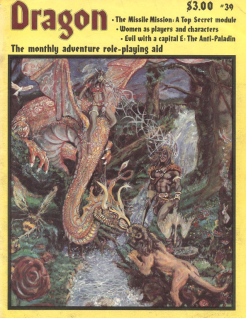 It’s been too long since I did a review of The Dragon. Between work and trying to write/edit a few games, Sundays have been just packed, but today I’m diving back in. This week, we’re examining The Dragon #39, released in July of 1980. I can remember those days. I was 8, and I think the entire country was just about fed up with the 1970’s. Despite what you might have picked up in a revisionist history class, the 1970’s sucked. Hard. In RPG land, though, things were heating up – new companies, new games, and TSR and D&D were about to hit the heights.

So, what did July’s issue have to offer? Let’s check out this edition’s Top 10 cool things.

As we often do, we start with an advertisement. This time from Iron Crown Enterprises. I’m trying to remember if I’d seen an I.C.E. advertisement in The Dragon yet, and I don’t think I have. God knows, we’ll see plenty in the issues ahead. 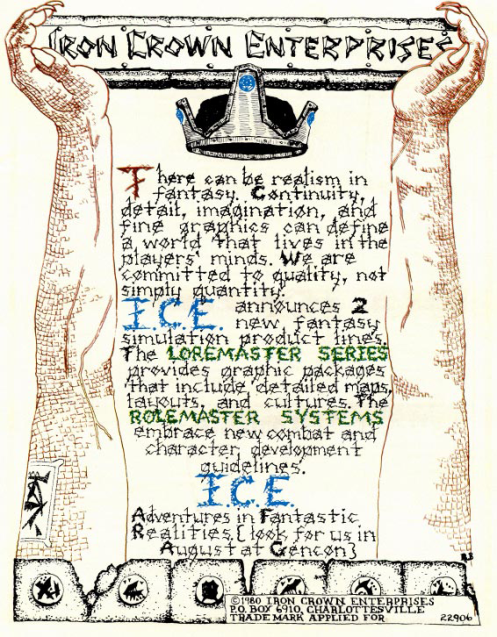 I must say, there’s a bit of humor in an ad that looks like that and boasts about “fine graphics”.

They also left their state off the address – did everyone know where Charlottesville was back in the day?

Anyhow – they would go on to produce some pretty good material – from tiny acorns do mighty oaks grow.

“Snap! Crackle! Zap! THE DRAGON computes! Recently, we’ve acquired a TRS-80 computer here at THE DRAGON (for those of you into home computers, it’s the Level II with 16K memory, a 16K expansion interface, two floppy-disc drives, and a printer). In addition to using it in conjunction with Mark Herro’s ‘Electric Eye’ column, we’ll now be able to look at a few of the plethora of game programs now available on the commercial market, and (hopefully) do some reviewing on our own. Please hold off on sending us your own home-brew programs for a bit yet; we’ll have our hands full with what’s on the market already. But electronic gaming is looming on the gaming horizon, and THE DRAGON is going to be ready for it.”

Personally, I don’t think electronic gaming will ever catch on.

Fantasysmith did some really nice miniatures articles, and the art was always top notch. This one in particular deserves an airing after 35 years: 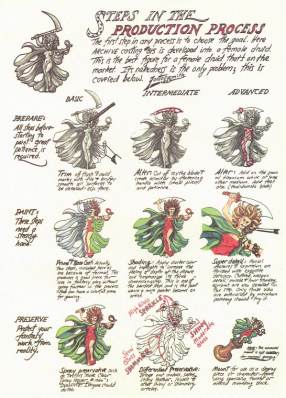 The one thing left off this guideline: Be good at painting. When I did the miniatures thing, I had no problem choosing the goal  … I was just often less than successful in getting there. 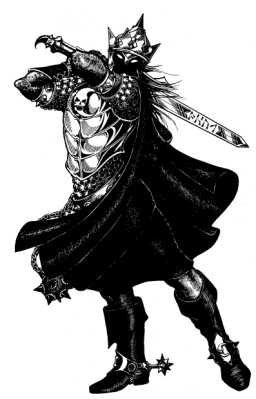 Really, this should be Cool #1, because this article by George Laking and Tim Mesford introduces a “beloved” element of old school gaming – The Anti-Paladin!

We start with awesome art (not sure who drew it), and then move on to the class itself.

The anti-paladin was an NPC class, meaning it couldn’t be used by players. To that end, it gives a guide on rolling up the anti-paladin’s scores, using 12+1d6 for strength, for example, or 10+1d8 for constitution. Charisma has a special formula that uses 1d4: a “1” equals 3, a “2” 4, a “3” 17 and “4” 18. On a charisma of 18, there’s a 25% chance of having an exceptional charisma. Anti-paladins with very low charisma cause fear, while those with very high charisma will charm humanoids and other monsters.

I bring the above up to show how different the game was in the old days. There was much more willingness to invent new sub-systems to do things.

Anti-paladins roll d10 for hit points, gaining 3 per level after 9th. They get a host of special abilities, including causing disease and wounds, protection from good, backstabbing, poison use, rebuking undead and demons, a special warhorse and cleric spell use at high levels. Their special swords are called unholy reavers, which is, by the way, pretty sweet.

SIDE TREK – ALIGNMENT AND GODWIN’S LAW

Why was alignment discussed so much back in the old days? Because alignment was a stand-in for philosophy – moral and ethical philosophy anyways. That made it interesting for lots of people, and contentious as well. A good example is the “Up On a Soap Box” in this issue, in which the following question is asked:

“Is something right just because we think it is right? If Hitler feels that it is right for him to kill six million Jews, is that morally acceptable?”

Heavy stuff for a game magazine. Alignment has become a throw away in many modern games, or has been rendered down into the faction rules it appears to have grown from. The discussions are still being had, though, in the gaming community and beyond.

Oh, and the answer to the above question is NO.

Well, we’ve already mentioned Hitler and the Holocaust in an article about alignment, why not delve into equal rights?

The article is “Women Want Equality and Why Not?” by Jean Wells and Kim Mohan, and there’s a follow-up called “Points to Ponder” by Kyle Gray. I’m not going to delve too much into the contents of the article, but I suggest you find a copy online (it’s there) and read through it. It’s worth comparing and contrasting what was being discussed 35 years ago with what is being discussed today.

Len Lakofka writes an article called “Starting from Scratch” about starting a new campaign and rolling up a new party. The bit I liked was the random tables for rolling up starting spells. For magic-users it’s pretty straight forward – roll once on each table for a magic-user’s three starting spells: 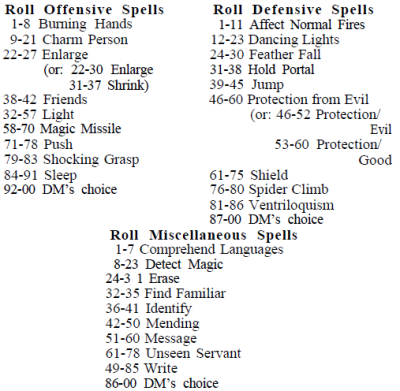 He also suggests a limited number of starting prayers for clerics – 1d4+2 to be exact, with those spells being rolled randomly and modified according to the cleric’s instructor’s alignment. 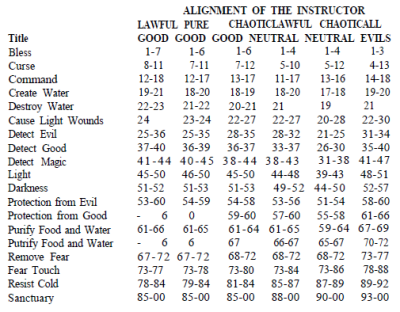 The article covers much more ground than this, of course, so it’s worth reading. 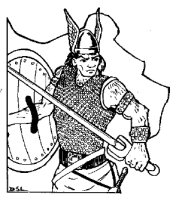 You know I always like these little Moldvay gems. This edition contains two Norse legends.

Bodvar Bjarki (16th level chaotic good fighter), the son of a Norwegian prince who was turned into a bear during the day. Bjarki wields Lovi, a +3 sword, +6 vs. magic-users.

The article also contains a small table of runes.

SIDE TREK: FANTASY VS. REALITY

A question to the sage:

My answer – it’s a made up rule to keep the game balanced, you knucklehead. Stop rationalizing make-believe!

I loved this piece by Karl Horak:

“Several months ago I came across a member of the minority that hasn’t acknowledged Gary as final arbiter. The campaign he ran was based on the original spirit of Chainmail instead of the latest revisions. To say the least, the game was fresh and unorthodox. His foundation was the 3rd edition of Chainmail and his vague recollections of the three-volume set of Dungeons &Dragons, which he never purchased.”

I dig the image in the ad to the right – makes you wonder what the Hell is going on. I’m going to turn this into a little side trek into comic books.

When I used to collect the things, the covers were a shorthand blurb about the story in the issue – the idea was to get a kid at a news stand to plunk down their money to find out what was going on.

Now comic book covers are mostly pin-ups, I suppose because they’re aimed at an different audience. They’re usually very well drawn, but personally, I prefer those old covers. They fired the imagination, and were pretty fun. In fact – when I find an old issue, those covers still induce me to buy them. The pin-ups – not so much. 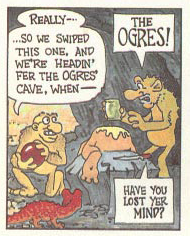 That’s all for this week. Hopefully the pace will slow down and I can get another one written next Sunday. I will have some updates this week from the next hex crawl in NOD.