Five years (and a few days) ago, I decided to start a blog. My first blog post went a little something like this …

“The Land of Nod is an old school rpg campaign I’ve been running for the past few years, initially using the 3rd edition of D&D, and then moving to the Castles & Crusades system and finally to something between Castles & Crusades and the excellent Swords & Wizardry clone of the original D&D rules. It seems as I get older, I look for ways to simplify my life – less static and more living.

The Land of Nod is my attempt at making a setting that allows players and referees to get down to the business of playing games. It doesn’t have a grand, thousand page history to memorize, or abundant restrictions on what you can play and how. It is a grand sandbox with all the requisites for the heroic adventures that have driven people’s imaginations for decades. Most importantly, it is a collection of places to see and things to do.

Over the coming months (and years?), this blog will serve as a place I can present my little imaginary world, and maybe a few notions that other role-players will find useful. So, consider this my entry into the Old School Renaissance.”

I was in the Swords & Wizardry camp back then (blessed be the name of Matthew J. Finch).

My plan at the time was to write hex crawls and other Land of Nod-oriented things and post them on the blog. About a month into it, I decided that hex crawl stuff was going to be tough for people to use if it was on a blog, so I thought about doing a quick Word document each month to collect that month’s material in one place. Then I thought … why not a PDF? Then I thought … why not publish it?

So, not long after the blog started, the NOD magazine started, with 25 issues now completed. In between, I also wrote a few games (Pars Fortuna, Mystery Men!, Space Princess, Blood & Treasure, Bloody Basic, Greatsword), had a chance to work with Frog God Games (I’d like to do more of that), and I’m working on getting another game, Grit & Vigor, published. Pretty sweet.

If this sounds like something you want to do, do it. It will probably not get much easier than it is now to write and publish your own material, provided you are willing to put in the time and effort.

I usually miss these anniversaries, but today I noticed that I finally hit 400 followers, so I figured I’d take note of this one. I want to thank all my readers over the years, especially the ones who have encouraged me with kind words and the ones who have actually forked over their cold, hard cash for something I’ve written, for supporting me. My plan is still to write up the entire Land of Nod in hex crawl form. If I live long enough, I think I can get it done! 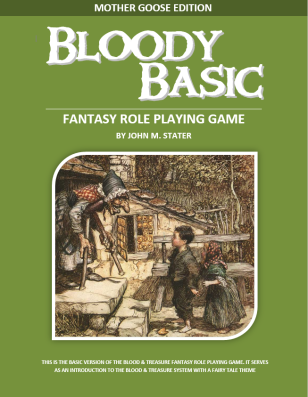 I’m almost finished with my Mother Goose edition of Bloody Basic. Just finishing up some layout and editing and putting on the finishing touches to the text. This weekend is going to be busy (Viva Las Vegas show and Easter), but if I find a few spare moments I’ll get the PDF version up for sale.

The Chaos edition is probably next … though I might veer into the Jules Verne-esque Victoriana edition. Don’t know yet.

It occurred to me today that it might be fun to do a Bloody Basic edition illustrated by women. It could put a light female spin to the game classes (maybe amazon instead of fighter, or amazon and oracle as sub-classes). The question – how to do it without involving stereotypes one way or the other – just good old fashioned fantasy role playing with art involving female characters by female artists. To women out there reading this blog, I’d love to hear from you if this sounds interesting to you. I’ve been perusing some of my favorite women artists on DeviantArt to approach for commissions, but suggestions from the assembled Nodians are always appreciated.

Yep, got NOD 25 up for sale in print today. Check it out if that sort of thing floats your boat.

Saw a glossary from an old book of Scottish fairy tales today. A few excerpts:

Baudrons: Scotch name for a cat

Cantrip: A freak, or wilful piece of trickery

Louping-on-stane: A stone from which to mount a horse

“Finlay the hunter lived with his sister in a lonely little house among the mountains, and near at hand there were giants who were descendants of Beira. This giant clan was ruled over by a hag-queen who was very old and fierce and cunning. She had great stores of silver and gold in her cave, and also a gold-hilted magic sword and a magic wand. When she struck a stone pillar with this wand it became a warrior, and if she put the gold-hilted sword into his hand, the greatest and strongest hero in the world would be unable to combat against him with success.”