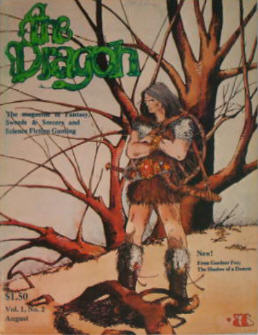 August of 1976 – A month after the bicentennial, and Marvelites were grooving to such titles as Planet of the Apes, The Champions and Black Goliath, the Seattle Seahawks were playing their first game, Big Ben breaks down in London, Viking 2 enters orbit around Mars, the Ramones make their first appearance at CBGB, and The Dragon’s second issue hits the stands. So what did the gaming geek of 1976 get for his money?

John M. Seaton devises a procedure for “monkish” promotional combat (i.e. knock off the master to assume his level). I love this kind of thing, and given the recent popularity of FlailSnails Jousting, I wonder if there isn’t a market for FlailSnails Monkish Combat.

The procedure would be similar – write up 6 rounds of combat, denoting your strike, kick, block or other maneuvers, and then we see where it goes.

—
Lots of fiction in this issue.

The second installment of Gygax’s Gnome Cache is in this issue. I’ll freely admit this here – I almost never read the fiction in Dragon. I probably missed out on something.

Speaking of fiction, Jake Jaquet gives us the conclusion to “Search for the Forbidden Chamber”. Didn’t read this either.

Gardner Fox (you might have heard of him) has a short story in this issue called Shadow of a Demon which is covered very capably at Grognardia.

Another installment of “Mapping the Dungeons”, wherein DM’s of the 1970’s try to hook up with players via The Dragon. St. Louis appears to have had a surplus of DM’s looking for players – 8 of them in this issue.

Some dude named Paul Jaquays was running the Spring Arbor College Dungeoning Society in Spring Arbor MI. Wonder if he ever amounted to anything.

Through the magic of Google, I found the following DM’s online:

Karl Jones – could be this guy?

Drew Neumann – maybe a composer of film and television scores – he was at Wylie E. Groves High School in Detroit at the right time (Class of ’77). Could have known Ellen Sandweiss, who was in Evil Dead. Did music for Aeon Flux

Scott Rosenberg of Jamaica NY – has a couple issues of The Pocket Armenian floating around online.

Ed Whitchurch has achieved some level of DM’ing fame

Joe Fischer gives us more tips for D&D Judges. He covers interesting entrances for dungeons (i.e. under stuff you don’t expect them to be under) and “friendly” traps that aren’t necessarily harmful. He also provides a random table for treasure chests that are, 50% of the time, trapped thus …

D% Trap
0-30 – 1d4 spring-loaded daggers fire when chest is opened
31-50 – Same as above, but daggers are poisoned
51-65 – Poisoned gas released when chest is opened
66-75 – When opened, chest acts as mirror of life trapping
76-85 – When opened, chest explodes for 1d6+1 dice of damage (wow!)
86-90 – When opened, an enraged spectre comes out [which can be read a couple ways, either of them endlessly entertaining]
91-95 – All characters within 5 feet lose one level [after the first use of this trap, I guarantee everyone will give the thief plenty of space when opening chests]
96-98 – All characters within 5 feet lose one magic item
99-00 – Intelligent chest with abilities of 2nd – 9th level magic-user [nice!]

He also mentions intelligent gold pieces that scream when removed from a room, or replacing real gold pieces in a dragon’s horde with chocolate coins (though as valuable as chocolate was in the “olden days”, that might actually be a step up). He also brings up the idea of creatures with odd alignments (chaotic dwarves, for example).

Monster Gems are 500 gp gems that can be commanded to turn into monsters (per rolling a wandering monster) for one week – when the week is up, or they are killed, the gem is destroyed as well. It might be fun to rule that every gem worth 500 gp (exactly) is a monster gem.

Hobbit’s Pipe (by Marc Kurowski) – Clay pipe, when smoked, gives ability to blow multi-colored smoke rings (4 per turn, moving at 4” (40’) per turn – love the specificity). The pipe can be smoked 3/day. He also offers up five magic pipeweeds, a bag of infinite wealth, helm of forgetfulness, and ring of infravision.

Lynn Harpold give a long account of Quetzalcoatl and his cult in Central America.

Creature Features gives us the remorhaz. Love the “stat block”:

Apparently, the standardization bug had not yet bitten.

Jon Pickens presents the Alchemist, a new D&D class. They don’t label this one as an “NPC Class”, so I guess it is fair game for all you D&D-ers out there. I’ll roll one up quickly for FlailSnails:

Special:
Max. AC is 5
Can use one-handed weapons (excluding magic swords)
Use poisons and magic items usable by all classes
Psionic ability as fighters (replace Body Weaponry with Molecular Agitation)

Potions:
None – until 3rd level (Scribe)

His bit on poison is pretty cool. If the HD of the poisoner or level of poison is equal to or greater than the victim’s HD, they must save or die. If at least half their HD, they are slowed until a constitution check is passed, trying once per hour. If less than half, there is no effect, but the poison accumulates in the blood until it’s enough to slow or kill the person. A very nice system!

This is actually a very groovy class. The hit points are low, so I don’t know how long Xander would have to live, but he can wear some decent armor and load up on poisoned darts and a poisoned long sword and might just make it to 2nd level.

Jon Pickens also presents optional weapon damage, allowing fighters and thieves to gain mastery in different weapons, increasing the damage they deal with them (except with dwarf hammers, military picks, pikes, pole arms and arrows). Fighters master one weapon per three levels, thieves one weapon per four (and are limited to sword, dagger and sling). Those with a Dex of 13 or better can gain mastery with a combination of two weapons, gaining the ability to strike with both weapons per round or with one weapon and treat the other as a shield. Sword and sword or flail and morningstar combos require a Dex of 16 or better.

Another good system – very clean and simple to use.

All in all, a pretty good issue. Lots of neat rules ideas and some good pulp literature.