This post is really just for me to organize my thoughts and put them in pixels before I completely forget them. If any of these ideas grab your imagination, let me know.

For the Money, For the Glory, and For the Fun
The Duke of Raleigh has a challenge for any crew of mutants who want to earn a big payoff – travel west into the Rockies and bring him back a load of the most valuable beverage in post-apocalyptic America … Coors! This would be a Mutant Truckers game, in which (if enough people were interested) two or more crews would complete to make the journey to Colorado and back for a load of Coors.

Assault on Eagle’s Nest
This would be an Action X game (yeah, I’d probably have to finish those rules first) in which a crack team of heroes assaults Eagle’s Nest (Hitler’s command complex). The characters would all be based on literary, comic and movie characters who would have been active during World War II. No super heroes, just guys and dolls who can hold their own in a fight. Indiana Jones, Boston Blackie, Mademoiselle Marie, D.A. Grant Gardner, Sgt. Rock, Maj. Reisman, Pvt. Kelly, a young James Bond, etc.

Silver Age Madness
A Mystery Men! game in which silver age characters deal with all the challenges of the comic books of that period (nosy mates, turning into a gorilla, being split in two, etc.) while trying to keep the world from ending by a mysterious assault from something beyond their reckoning. 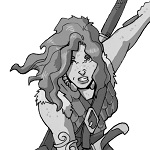 Crawling Through Nod
This would be a hex crawl through Nod using Blood and Treasure. A band of diverse heroes (all the races and classes I’ve published in Nod would be open game) doing what they want, going where they want in true sandbox style. There could be a few epic quests hidden in the sandbox for folks who like that sort of thing. No limits to this one – everything would be open from Hell to the Firmament.

The Catacombs of Old Mars
Using Space Princess rules, a band of heroes delve into the ancient catacombs of Mars in search of a mad scientist, who is attempting to unlock the Shiva-Force, a formula that could end the universe as we know it.

Fortuna’s Wheel
This would be a megadungeon delve using Pars Fortuna rules, as characters win their way into the Great Spire at the center of the world, atop of which there stands (reputedly) the Wheel of Fortuna, with which one can gain their hearts’ desire. All you have to do to get it is make your way through a mile high spire of stone that supports hidden kingdoms and every monster you could imagine.

The Streets of Shore City
Another Mystery Men! campaign, this one pitting low-powered heroes against the criminal elements lurking in the alleys of Shore City. Gangbusting, random patrols and maybe a chance to show up the “super heroes” when things really hit the fan.