Sorry I’ve been away the last couple days. Still working on Tome of Horrors, Mu-Pan and Mystery Men! In the mean time, I have this odd little thought experiment (that took waaaay to much time to produce) …

So I’m working in the yard the other day, and an idea pops into my head – essentially doing something like the League of Extraordinary Gentleman using only ’70s television as my guide (with a few nods to older and later television). What would a super hero/sci-fi/fantasy world built with ’70s television look like? Well, I think it might look a little something like this …

Note: I’m building most of these heroes with 30,000 XP (except some of the big boys and girls, who get 60,000 XP) to keep them even and maintain the reduced power level usually found on the small screen.

Early 1970’s
Prior to the coming of the disco decade a few heroes had already made their mark on the world. During the WWII, Wonder Woman arrived from Paradise Island to aid the allies against the Nazi threat, but by the end of the war she left Col. Trevor to return home. Whether she ever worked with government agent Steve Rogers is unknown. Since the 1950’s, the incredible Superman had been protecting not only Metropolis, CT but the entire world. The dynamic duo of Batman and Robin had been active in Gotham City, NJ for a decade. The main focus of the nation during this period was, of course, the Cold War with the Soviets, and a whole host of heroes had answered their country’s call, from legendary agents 86 and 99 of Control to the men from UNCLE to the U.K.’s Avengers initiative, which unfortunately closed down by the end of the 1960’s (though whether Steed, Peel and the others ended up in the Village is, of course, a state secret).

As the 1970’s dawns, Dr. Michael Rhodes travels the country with assistant Nancy Murphy solving supernatural crimes and mysteries. Whether the due ever investigated rumors of a genie in Cocoa Beach, FL, witches in Westport, CT, hauntings in Schooner Bay, ME or a flying nun in Puerto Rico is unknown. Magician Anthony Blake, on the other hand, uses prestidigitation and his skill as an escape artist to solve crime.

In 1970 the world still mourns the loss of the fist sub-orbital passenger carrier Spindrift to a cosmic storm. The fate of the crew remains unknown.

A number of organizations, private and public, are in operation in the early 1970’s to protect the world from evil, including Division Seven’s Impossible Mission Force, Hawaii’s Five-O squad on the public side and the World Security Corp of San Francisco and high-tech detective agency Intertect in Los Angeles. World Security Corp’s key agents include Probe One (Hugh Lockwood), Omega Probe (Nick Bianco) and Backup Probe (C.R. Grover), while Intertect soon loses their top operative, soldier-of-fortune Joe Mannix. Agents 86 and 99 are still active with Control in Washington D.C. and still thwarting the plans of Chaos, now with the help of android Hymie. Glenn Garth Gregory of the Delphi Bureau uses his photographic memory to conduct counter-espionage operations.

Meanwhile, a loner known to government agents as “The Immortal” makes his way across the country, pursued by Fletcher.

Mid 1970’s
By the middle of the decade Dr. Michael Rhodes gets some competition in the arena of supernatural investigations, in the form of reporter Carl Kolchak of the Independent News Service’s Chicago Bureau. One wonders if a conversation with fellow journalist Richard Cunningham ever sent Kolchak north to Milwaukee, WI to investigate reports of middle-aged auto shop teacher Arthur Fonzarelli and his amazing control over electronics and women. If he did, he might be told the strange tale of a visit from a man from another world (but more on him later).

Even more incredible is the rise of several new super powered heroes. Astronaut Col. Steve Austin (a colleague of Maj. Anthony Nelson and Capt. William “Buck” Rogers) is revived after a terrible accident and turned into a cyborg operative of the Office of Scientific Intelligence (total cost estimated at $6,000,000). A year later a similar operation is performed on tennis pro Jaimie Sommers of Ojai, CA, making her the world’s first bionic woman.

Two invisible heroes are created during the middle part of the decade, including scientist Daniel Westin who is turned invisible while sabotaging his own equipment at the Klae Corporation and secret agent Sam Casey, code named “The Gemini Man”, of Intersect.

In New York City, a young college student named Peter Parker develops the abilities of a spider after being bitten by a radioactive arachnid. Meanwhile, in California, teenaged Billy Batson begins traveling the state with his mentor in an R.V. and helping folks out of problems as Captain Marvel. He is sometimes assisted by high school teacher-turned superhero Andrea Thomas, who possesses the power of the goddess Isis.

In the U.K., the Ministry revives the Avengers program with two new agents, Purdy and Gambit, under the tutelage of veteran John Steed. Apparently, Steed and former colleague Emma Peel were not sent to the Village.

In Los Angeles, there are persistent rumors of a band of ex-special forces operating in the L.A. underground as soldiers-of-fortune. If you have a problem, if no one else can help, and if you can find them …

Late 1970’s
After 35 years away, Diana Prince, Wonder Woman, returns to America to join the Inter-Agency Defense Command with Steve Trevor, Jr. A few years earlier the United States had attempted to create its own Wonder Woman, but the program was ultimately not continued. Meanwhile, former marine Steve Rogers, Jr. – the son of 1940’s government agent Steve Rogers – is given an injection of FLAG (Full Latent Ability Gain, not to be confused with the Foundation for Law and Government) after a terrible accident and becomes the costumed hero Captain America. Cap roams the country in a heavily modified van fighting crime.

Joining the Immortal as a wandering fugitive is Dr. David Bruce Banner, physician and scientist, who becomes a creature nick-named “The Hulk” after suffering a powerful dose of gamma radiation in an experiment meant to unlock the hidden strength inside human beings. Perhaps his travels take him through the County of Hazzard, GA, where a couple of good old boys has recently been put on probation for running moonshine.

Some non-humans are among the heroes that emerge in the late 1970’s. In California, a possible survivor of the destruction of Atlantis is found with amnesia and goes to work for the Foundation for Oceanic Research, a government agency. Perhaps his travels take him to Bay City, CA, home of detectives Starsky and Hutch. In Boulder, CO, the aforementioned man from space, one Mork from Ork, touches down on Earth on a mission to understand human beings.

Sorcery still abounds in the late 1970’s. Perhaps its most powerful practitioner is a mysterious man called Mr. Roarke, who dwells on a fantastic island in the Caribbean making people’s wishes come true. He is assisted, they say, by a strange homunculus called Tattoo. Just as disturbing is the presence of the infamous Count Dracula, posing as a professor at a college in San Francisco.

Scientific wonders of the late 1970’s include the deep space probe ships Ranger I and Ranger II (Capt. “Buck” Rogers is training during this period for his mission on Ranger III, the last of NASA’s deep space probes) to the incredible nuclear Supertrain, which is the size of a cruise ship and travels between New York and Los Angeles.

Beyond
As the decade closes, mankind faces the destruction of their planet in 1987 by nuclear war – a nuclear war that does not catch Buck Rogers, who is frozen in space at the time. The ultimate cause of that destruction might be the robotic servants of the alien cylons, who followed mankind’s last battlestar, Galactica, to Earth. Perhaps that nuclear holocaust can be avoided by the assemblage of a league of heroes under the tutelage of a mastermind like Mr. Roarke or the mysterious time traveler known only as “the Doctor”. 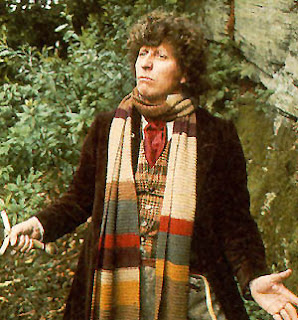 10 thoughts on “League of Groovy Gentlemen (and Ladies)”