Okay – suitably odd blog post title. Just found some post-apocalyptic dolls designed by Yeon Guun Jeong/BHEAD that I thought might be of interest to the Gamma Inclined. Found via Super Punch, my one stop shop for stuff on the interwebz.

If we could be guaranteed girls like this, I think more of us could get on board with the apocalypse. 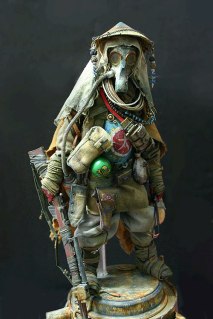 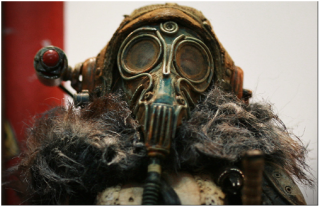 Makes me think a post-apocalyptic early 20th century Europe embroiled in a never-ending Great War could be a very cool setting for Gamma World. Remnants of the Great Powers and their armies, guys in jodhpurs slashing at fleshy-headed mutants with their cavalry sabers, wandering undead produced by the mass slaughter of trench warface and unable to go quietly into the afterlife (and a good excuse for Van Helsing-style clerics in a Gamma World setting), chemical mutants (remember, before the a-bomb most super powers came from accidents involving chemicals – stupid upstart radioactive superheroes) scouring the bleak and broken landscape for sustenance – clearly a good time would be had by all.

In other news – finished writing Hexcrawl #2 last night – huzzah! Now I just need to finish up NOD #6, write my quarterly reports (work related – check them out if you have an interest in commercial real estate in Las Vegas) and then start delving into Mystery Men! and sketching out the three cities that will appear in NOD #7 (Lyonesse, Antigoon and Blackpoort) and Hexcrawl #3, a sort of bleak zombie-land of basalt hills, ashen plains and slow, oozy rivers. But no major deadlines staring me in the face for a few weeks after NOD #6, so time to party!

Oh – and Aeons & Auguries is getting lonely in the Megacrawl – for cryin’ out loud, somebody write a comment.

Oh Oh – and 99 followers – whose going to take the Land of Nod into triple digit territory? The 100th follower will receive a personalized HUZZAH fit for framing.

Edit – 101 followers reached – thanks folks! Also, the setting sketch above is getting some attention, especially from JD Jarvis who has already started mapping HERE. Those who like the idea of such a setting might want to check out artist Keith Wormwood – he’s doing some work lately that would go well with such a setting.

5 thoughts on “Dolls of the Apocalypse and Other Things”