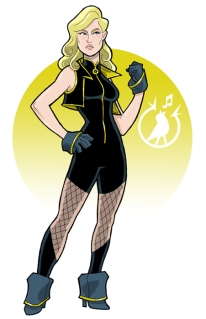 The project now has eight backers, with Sean Wills of Bite the Bulette, Lou Goncey of the Purple Wurm and Scott Morrison of – well, I don’t know actually – Scott, if you have blog, let me know – throwing their hats into the ring as Golden Age patrons (well, Mr. Goncey actually pledged for no reward, but he still pledged at the Golden Age level. If that was a mistake and you want your reward Lou, let me know!)

The project is now 76% funded with 22 days to go – if you’re considering becoming a backer, check out the Kickstarter page HERE. Remember, the more money we gather, the more art we can afford and the better this project will look. I’ve also put some more work into the alpha document if you want to check it out.

Last update, I previewed the tough guys who were up for a vote on who gets illustrated by our artist, Joel Carroll (that’s a sample of his work above) and included in the book as sample heroes. This time, we’ll look at the elementals, heroes whose powers are based on natural forces – electricity, fire, water, etc.

Ray O’Light (a grand old Irish name if ever I heard one) is an electrical worker who gets zapped on the job. Luckily, a passing scientist saves his life and in the process endows him with electrical powers. Dig the translucent helmet!

Bob Blake discovers that being friends with a brilliant chemist can cause problems, as he is accidentally doused in a formula that Harry Thurston accidentally discovers (hmm – lots of accidents here). Donning aviator goggles and a handy pair of tights, Blake turns lemons into lemonade and becomes Hydroman.

Young Bob Sanders gets caught in a cyclone in his home town of Windy Gap and, obviously, comes out of the experience with super powers.

No, his powers don’t come from being smeared with radioactive vapo-rub. Vapo-Man is scientist Bradford Cole and was caught in a lab explosion caused by Nazi saboteurs (I hate those guys).

Carol Vance is orphaned by a forest fire, but given powers by the god of fire after he rescues her (so he’s not such a bad guy after all). Adopted by the Martin family, she puts her divine powers to work smashing Nazi spy rings and generally making the lives of criminals more interesting. Also – girl in a bathing suit with a flaming battleaxe!

Remember – no need to vote your favorite now, as the official ballot will be sent out when the project is funded. Thanks to everyone who has put money into the project so far!