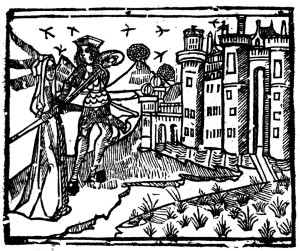 Each manorial village consists of a manor (often a castle) and approximately 4 hamlets. Each village is 1,500 acres in size and supports a lord, his family and retainers and about 1,200 peasants. Each manor is expected to provide one knight, one sergeant and eight men-at-arms for service in the prince’s army. Each manor also contributes 12 peasant militia wearing padded armor and armed with spears. Each manor is considered a parish and is served by a parish priest.

Upon approaching a manor, a party of adventurers should be challenged by the manor’s lord and his sergeant (or by the sergeant and a few men-at-arms). They ask the adventurers their business, do their best to assess whether they pose a threat (and deal with that threat if necessary) and may charge them a toll. Since manors are approximately 1 to 3 miles apart, a party will pay many tolls while traveling through civilization.

Near a settlement, 95% of lords will be human nobles with no class. The remainder will either be low-level heirs of name level (i.e. level 9 and up) adventurers or actual name level adventurers.

Manorial villages do not have inns or taverns. Instead, one might lodge with a yeoman or the lord of the manor. The divine laws of Jove demand such hospitality be shown and the traditions of chivalry dictate that lords show hospitality to fellow knights. In place of taverns, peasants open their homes to customers when they finish brewing a batch of ale, cider or wine.

Disaster
The city is going through a drought or flood. Food prices are 5 times higher than normal and people are starving.

Fire
The city is ablaze. It will burn for several days unless put out by a strong rain or magic.

Vistas: A thick column of smoke rising into the sky, the screams of the injured, the wail of displaced peasants mourning the loss of life and property, fire brigades, lines of men, women and children conveying buckets of water from wells, fountains and the nearest body of water, a fine ash covering everything, homeless folk camped outside the city, clerics attending to the wounded and heartbroken, pick pockets working the crowds

Peasant Revolt
The peasants are rioting and executing nobles and merchants because they’re fed up with their lot in life.

Vistas: Bands of 3d6 angry club-wielding peasants, aristocratic heads on pikes, burning buildings, looted shops that would normally be frequented by peasants, an exodus of carriages, noblemen disguised as women trying to escape, knights putting peasants to the sword, rabble rousers being tortured or burned at the stake.

Plague
The city-state is infected by a plague. PCs must make constitution saves each day to avoid fatigue and 1d6 points of damage. Alternately, the city is dealing with a plague of spawn-creating undead (see random encounters).

Shortage
The city is going through a shortage of the first thing an adventurer tries to purchase, with the prices ten times higher than normal and then only available from the black market (i.e. den of thieves).

Siege
The city is under siege by a rival city or by the local barbarians. Assume from one to four times as many attackers as defenders. Siege engines are present (or, in the case of some barbarians, siege beasts or giants).

Vistas: Bands of mercenaries raiding the countryside for food, columns of smoke rising to the heavens, loud speeches rallying the troops, the crack of boulders hitting fortifications, displaced peasants begging by the roadside, the colorful pavilions of the besieging captains.

Tournament
The city is in the midst of a tournament. There will be jousting, melee and archery contests as well as feasting and dancing. There may also be athletic competitions and team sports. Clerics of Minerva and Hercules will be on hand to manage the proceedings. A champion for each of the events (level 6 to 12) should be generated.

Vistas: Strolling minstrels and jongleurs, peddlers selling trinkets and bits of roasted meat and vegetables, colorful pavilions and banners, processions of knights in gleaming armor, the crack of lance on shield, the roar of the crowd.

Random Encounters
While monsters are more common in the wilderness than in civilization, they can also be encountered in a myriad of forms. Assume a 1 in 6 chance of a challenging encounter every time the adventurers turn a corner, with that chance doubled at night to 2 in 6. Roll 1d12 to determine the level of NPCs encountered in this manner.

* A noble procession consists of a nobleman and his wife in some sort of conveyance, anything from a sedan chair to a carriage. They are accompanied by 1d6+6 heavily armed and armored men-at-arms, a similarly equipped sergeant, and servants as needed.