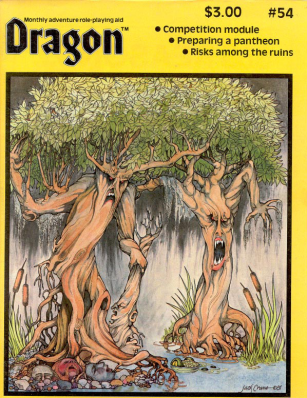 Has it been that long since the last Dragon by Dragon? Time flies and time is tight, but there should always be time to travel down through that great gaming oak to the roots and ferment in the brew of our elders.

What the hell am I talking about? The bourbon is doing its job. Let’s get started on issue 54 of the venerable Dragon and see what inspiration we can pull from this issue. Yeah, this will be less review and more “what’s cool that we can use today”.

How about those angry trees on the cover by Jack Crane. How about a high level druid illusion spell:

The druid enchants a woodland with terrible phantasms. When one approaches the woods proper, the trees loom over them and seem to animate, with grotesque faces and bony claws. Creatures with fewer than 3 HD must pass a saving throw vs. fear or be frightened away. Those who are not afraid initially may plunge into the woods, but things grow worse before they get better. With each step, a save is required for creatures one additional HD higher (i.e. one step in and creatures with 4 HD must save, the next requires creatures with 5 HD to save, and so on). If a creature becomes frightened, all creatures with fewer HD must save again. As one moves deeper into the woods, the wind whips up, the owls hoot, the foliage closes in and becomes more noisome … until one has gone 10 paces in, when the illusory magic ceases and the woods become normal once again.

“My “lack of realism” argument is very well supported in all of the AD&D entries. By taking a close look you will find an incredibly large amount of monsters in a relatively small area, which, in most cases, has not the means to support even a few of the creatures presented.”

Here’s the first article I dug in this issue, covering ruins – the much neglected cousin to dungeons in D&D. The article contains ideas on designing ruined cities (and thus non-ruined cities), and I love the asumptions made in the article. These are fantasy cities from the mind of Mr. Parker, and they’re awesome. Here’s a few thoughts I enjoyed:

1. Give the players a map showing the perimeter of the ruins, with credit going to the party thief. This saves time, and doesn’t give too much away.

2. Go through the map and decide which buildings are monster lairs; don’t determine what the building actually is until the players investigate.

3. The table of buildings that might be in a ruin (and thus also useful for randomly determining building use in a city) 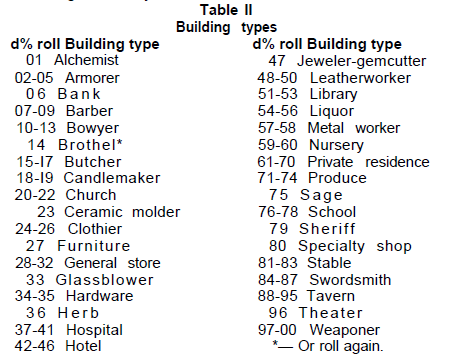 5. “The chance for a given thief to open the lock on a bank vault is computed by multiplying the height of the vault (in stories) by 20, and subtracting that number from the thief’s normal percentage chance to open a lock. Thus, a 17th level dwarven thief with a dextereity of 17, who would have an adjusted open-locks chance of 119% for normal locks, has only a 49% chance of cracking a third-story vault, and no chance to open a vault on the sixth story, because the adjustment for the vault’s height (6×20=120) is greater than 119.”

This is what made AD&D great.

6. Private residences are 1d4 stories high. 10% are unusual and were owned by …

7. How long does it take to find a particular building: 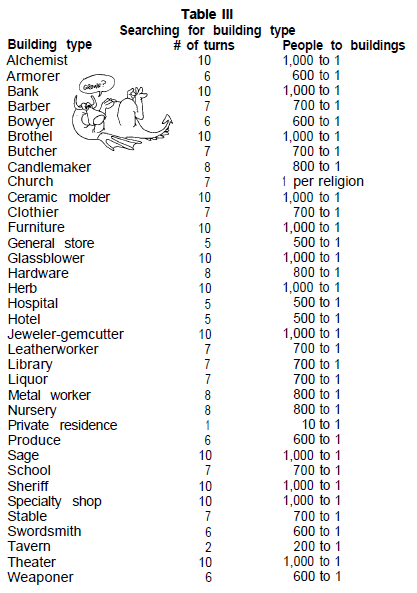 The Righteous Robbers of Liang Shan P’o by Joseph Ravitts

Cool article with NPC stats for some bad boys of the Water Margin. They include Kung Sun Sheng (“Dragon in the Clouds”), Tai Chung (“The Magic Messenger”), Chang Shun (“White Stripe in the Waves”), Li K’uei (“The Black Whirlwind”) and Shih Hsiu (“The One Who Heeds Not His Life”).

This is followed up by a Giants in the Earth covering E. R. Eddison‘s Four Lords of Demonland.

I Want One of These

Would also be a great game – Wizard Dragon Dwarf Assassin

Beware the Jabberwock by Mark Nuiver

This one presents stats for the Jabberwock, along with a stunning piece of art. The B&T stats are:

Notes: Jabberwocks mature as do dragons. They have a fearsome gaze (creatures less than 4+1 HD; frightens; frightened creatures must pass a second save or be paralyzed with fear for 2d4 rounds). Tail attacks anyone behind the creature, with a -2 penalty to attack.

Worth mentioning this module for AD&D, which is also a sort of quiz with a system for scoring. It’s strange, but probably worth checking out, especially if you want to prove you’re better at AD&D than a friend … or foe! Each room gives you a number of options, usually preparations and actions. Based on your choices, you score points and prove your superiority over other dungeoneers. Cavern Quest could be a fun thing to run on G+ using the polling function, but it is probably too long to make it work.

Cash and Carry for Cowboys by Glenn Rahman

If you need some price lists for an Old West game, this is worth checking out. I wish I’d seen it before writing GRIT & VIGOR.

Bottle of Undead by Bruce Sears

This Makes Me Happy … 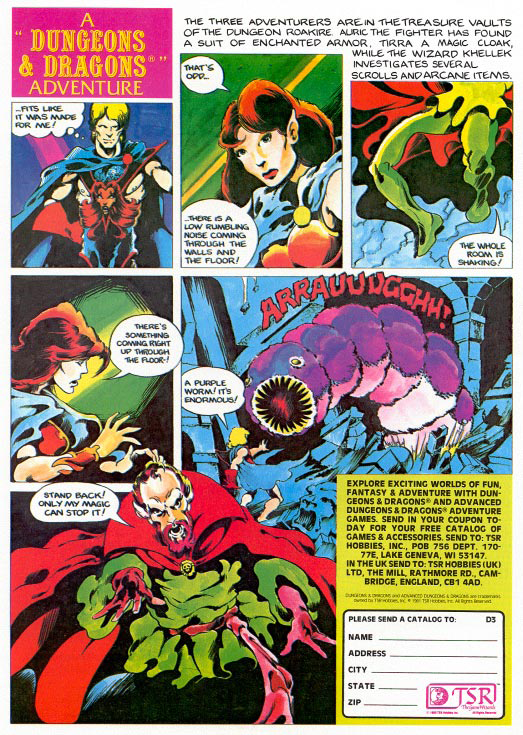 As always, I leave you with Tramp …