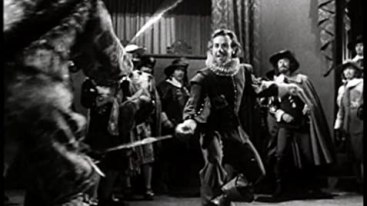 Here’s an idea I had today while walking the dog. It’s about combat with multiple attackers in RPG fights of the B&T variety.

If the fighter actively engages all three, the goblins get no bonus to attack, but the fighter suffers a -2 penalty to his attack.

If you use a rule wherein the fighter class can attack multiple opponents, you can still use these penalties, but apply them to each of the fighter’s attacks during a round.

Note – I planned to use an image from Cyrano de Bergerac (1950) where he was fighting several men, but couldn’t find it. I stuck with Cyrano anyways, because he’s my hero.