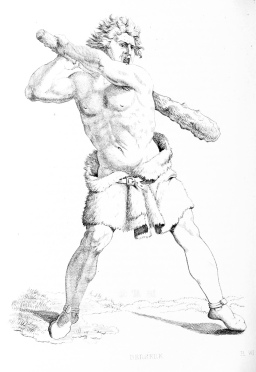 Going berserk in combat is such a chaotic thing (small “c” chaotic, of course) that it seems like a perfect place to stick in a random table.

I thought about making a random berserking table for the barbarians in Blood & Treasure Second Edition, but space constraints and a desire to avoid excess dice rolling (I know, for some there cannot be enough) I didn’t. Still, I wrote it, so I might as well get it out there!

Roll 1d10 and add your barbarian level (or half your fighter level, if your GM swings that way). You may roll once for the combat, or roll each round, with the effect lasting for that round and then ending.
While berserk, you cannot cast spells, make ranged attacks (other than throwing things), retreat from combat, make or follow complex plans, stop attacking a foe until you or it are dead, and when you kill one foe you must move on to the next closest foe.