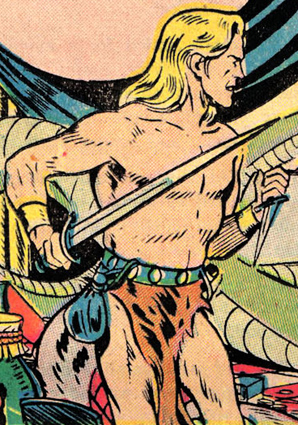 This is a half-formed notion that came to me last night while working on Blood & Treasure Second Edition. It’s not in that book, but I thought somebody might find it useful.

The idea of a “barbaric edge” comes from good old Robert E. Howard, who posited the notion that barbarians were in many ways superior to members of civilization, whether they be decadent nobles or downtrodden peasants. Barbarians in Howard’s fiction are usually a cut above non-barbarians.

In games, the barbaric edge allows you to treat one of the following ability scores – Strength, Dexterity, Constitution or Wisdom – as though it were an 18. Each morning, a person with the barbaric edge can decide which ability they will treat this way. Ability damage affects the temporary score, and the real score if the damage persists and the barbarian chooses to boost a different ability score from the one that was damaged.

Note that druids who boost Wisdom do gain extra spells for high Wisdom, but clerics do not unless they worship something wild and primordial. One might permit it for a cleric of Thor, for example, but not a cleric of Minerva.

Example: Crom the Barbarian (pictured above) wakes up one morning and stretches his iron sinews. He normally has a strength score of 13 (a +1 bonus). Today, he’ll increase his bonus (but not his actual strength score) to +2. Tomorrow he might be feeling especially cat-like, and improve his +0 dexterity modifier to +1.

How does one obtain a barbaric edge? By living rough in the wilderness and eschewing the soft pleasures of civilization. This means that the barbaric edge is open to any class, provided they do the following:

1) Always sleep outside in the wilderness; in a pinch, sleeping in an alley or field will do. This means no beds, no pillows – no more than an animal pelt to protect you from the elements.

2) Low retention of wealth; you can keep 10% of your found treasure to spend on equipment and gear (maybe more if you use a system that requires paying for training to level up), giving the rest away. Treasure is there to be won, not enjoyed – think of it as catch-and-release. Treasure not kept must either be discarded as though it were trash, given to others (who may not spend it on you) with a hearty sniff of contempt, or spent in a tavern on booze and sex (i.e. drinks on the house, and you must drink until you collapse or get in a rip-roaring fight).

3) No fancy clothes or armor; you retain the barbarian edge by wearing no more than leather armor or maybe a chainmail shirt if they are used in the campaign. You cannot wear silks and satin – really just a loincloth and sandals or fur boots will do when you’re not fighting.

4) A lack of trust for civilization and civilized people. A barbarian can adventure with civilized men and women, but they must be kept at an emotional distance, and the barbarian must sneer at and criticize their soft living and decadent morality. This is primarily done through role playing.

5) A barbarian’s food must come from his own hunting, gathering or fishing rather than from “iron rations” and magic. If this means going hungry, so be it. The barbarian may indulge in a tavern after an adventure, but only once and only in terms of a tavern crawl as in (2) above.

Breaking any of these rules means the barbaric edge is lost. No ability boosts. It can only be regained by living by the above rules for a full month of game time (or perhaps for two or three game sessions if that’s easier to calculate). Only after that time spent living wild does the barbarian shake off the excesses of civilization and regain his barbaric edge.