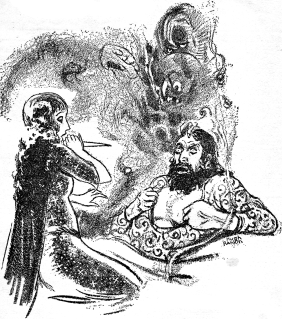 Before I started writing this blog or publishing, I did a fair amount of writing for myself and the people with whom I gamed. I recently came across some files I’d stashed away, including the “original” NOD RPG, which was really just a mash-up of Swords & Wizardry and Castles & Crusades, with art from Wayne Reynolds, and this little ditty about racial archetypes.

The idea was to swap out the common fantasy races for these archetypes, with options chosen by the players so that they could, in essence, build their own “race” for their character. I used some of these idea later in Space Princess for those races, and a few ideas have probably filtered into Blood & Treasure, but I thought people might enjoy seeing the original, with only a little editing for spelling. Again – assume these were for some unholy mash-up of S&W, C&C and 3rd edition.

These rules are designed to let you model races not found in the Player’s Handbook.

Attribute Modifiers
All of the archetypes in this document except Aliens, Dynamics, and Natives are allowed one attribute modifier from the following list.

Dynamic Characters
Dynamics are the most common form of adventurer. They rely on training and luck to win the day, not innate powers.

Alien Characters
Aliens are defined by strange physical and mental powers. They are probably the most versatile type of hero, after the dynamic. Virtually any kind of “super powered” hero can be realized with the alien type.

Senses: Normal – but see below.

Powers: Aliens can choose three powers from the following list.

Mental Powers
All mental powers that are derived from Jason Vey’s psionics rules follow those rules normally. The alien should be treated as a 1st level psionicist for the purpose of using the ability. If an alien takes a psionic mental power multiple times, he increases his effective level for using that power by 1. Thus, an alien that took metabolic control three times would use the power as a 3rd level psionicist.

The githyanki are descended from human slaves kept by the mind flayers. Ages ago they rebelled and escaped to the Astral Plane, where they now dwell. Githyankis have three mental powers: Alien mind, heightened mentality (+1 Int), and psionically gifted.

Alternate Form: Beastes can alternate their form between that of an animal, a humanoid, and a hybrid form. Changing form requires one complete round during which the character can do nothing else. Armor and equipment do not change form along with the beaste. In each form the character’s level and attribute scores are unchanged.

Animal Form: When in animal form the beaste is virtually undetectable from a normal animal. Beastes gain the ability to speak with normal animals when in their animal form. While in animal form, a beaste cannot use any weapons, armor, or equipment, nor can they cast spells. They can understand any language they know, but may not be able to reply.

Humanoid Form: When in humanoid form, beastes looks like a normal humanoid of a type chosen during character creation (i.e. elf, dwarf, human, orc, etc). Whatever their chosen humanoid guise, they always retain some distinctive feature of their beaste form. The choice is up to the player. In humanoid form, the beaste loses its twilight vision and enhanced sense of smell.

Hybrid Form: A beaste in hybrid form appears as a combination of animal and humanoid – their exact appearance is up to the player. In this form, they retain the special attacks and qualities of their animal form, but also have working humanoid hands, and can speak humanoid languages.

Speak To Animals: In all forms, a beaste can speak to animals at will.

Kitsune are fox beastes of Japanese folklore. They are capable of taking the form of a human, fox, or human-fox hybrid. They gain a +1 bonus to charisma and a -1 penalty to wisdom.

Elemental Characters
Elementals carry the blood of elementals in their veins. All elementals show this heritage in their physical appearance.

Energy Resistance: All elementals have 50% resistance to one energy type based on their elemental heritage:

Elemental Power: Elementals have special abilities based on their elemental heritage.

Macabre Characters
Macabres are either born from the undead (i.e. their parents were made undead while they were in the womb, or they were sired by a vampire, or there was a strange ritual involved), the result of botched resurrections on their pregnant mothers, or maybe they are actually sentient undead. Macabres can choose to be intangibles (like ghosts, shadows, or wraiths) or corporeals (like zombies, ghouls or vampires). They can be small, medium, or large.

Stunning Touch: Macabres have a touch attack that stuns living creatures for 1d4 rounds if they fail a constitution saving throw. They can use this once per day.

Intangibles: Intangible macabres can use ethereal jaunt once per day.

Corporeals: Corporeal macabres have a 50% chance to ignore extra damage from sneak attacks, back attacks, and critical hits.

Sample Macabre: True Ghoul
The true ghouls are a race of undead that haunts the deepest reaches of the Underworld. Unlike normal ghouls ,they are intelligent and more-or-less civilized. A true ghoul has the normal resistance to positive and negative energy and stunning touch of a macabre. As corporeal macabres, they have a 50% chance to ignore extra damage from sneak attacks, back attacks, and critical hits. They have a +1 bonus to constitution and a -1 penalty to dexterity.

Magical Characters
Magical characters have magical power flowing through their veins. This is usually due to a fey, planar, or draconic heritage.

The list a magical character chooses his spell-like abilities from often corresponds to his heritage: wizard for draconics, illusionist or druid for feys, and cleric for planars.

The spells chosen must be approved by the CK.

Sample Magical: Tiefling
Tieflings have fiendish blood in their veins. They have 25% resistance to cold, fire and poison damage, and can cast darkness once per day. They have a +1 bonus to dexterity and a -1 penalty to constitution.

Native Characters
The native is tied to where he has grown to adulthood, whether he is a barbarian of the forests or a city slicker.

Native Environment: Natives must designate one “environment” as their native environment. A native can choose from the following environments: Aquatic, Arctic, Desert, Forest, Jungle, Hills, Marsh, Mountains, Plains, Underground, and Urban. Man-made dungeons do not count as an urban or underground environment.

All natives receive a +1 bonus to initiative, attribute checks that would benefit from familiarity with an area, and +10 ft to movement when in their native environment.

Finally, natives get a +2 bonus to AC when fighting large creatures native to their native environment.

Sample Native: Cimmerian
The Cimmerians of Robert E. Howard’s Hyborian tales are native to a land of steep, rugged hills. In such environments they gain a +1 bonus to initiative and attribute checks, a +10’ to their movement. Their traditional enemies are the Picts, Vanir, and Hyperboreans, against whom they are +1 to hit. Against large creatures native to Cimmeria they have a +2 bonus to AC.

Note: I think I snagged this from somewhere else – maybe Jason Vey – if anyone knows, let me know

Prometheans are creatures that are manufactured by other creatures. They are sentient, and as capable of emotion as their player wishes them to be. Prometheans can be built from a variety of materials, including wood, metal, stone, clay, porcelain, or even unliving flesh.

Constructed: Prometheans are immune to any effect that requires a constitution save that doesn’t normally affect objects. They do not need to eat, sleep, or breath, although they can benefit from imbibing a magical potion.

Outer Shell: Prometheans gains special abilities based on the composition of their outer shell. Choose one.

Innards: Prometheans gain special abilities based on their innards. Choose one.

Sample Promethean: Karakuri
In real life, karakuri are primitive Japanese clockwork automatons. In a fantasy game they can be prometheans of ceramic composition and clockwork innards. This gives them a +2 to charisma checks, a +2 bonus to grapple attacks, and a +2 bonus to AC vs. disarming attacks. Since they are constructs, they need not eat, sleep, or breath. They have a +1 bonus to dexterity and a -1 penalty to constitution.

Racial Subtypes
The following subtypes can be added to any racial type.

Aquatic: Aquatic creatures can breath underwater and gain a swim speed equal to their land speed. They must immerse their bodies in water at least once per day or lose 1 point of Constitution to dehydration.

Avian: Avian creatures have working wings; they gain a fly speed equal to their land speed, but suffer a -2 penalty to Constitution due to their hollow bones.

Insectoid: An insectoid’s antenna give it the ability to fight without the benefit of sight. They suffer half the normal penalty when fighting blind.

Size: A creature’s size is assumed to be Medium, i.e. between 5 and 7 feet in height. Optionally, it can be Tiny, Small, or Large.