I have three new (or recent) releases to bring to your kind attention.
Before I talk about them, though, HERE’S A LINK to those Bloody Basic printable character sheets I mentioned (including Weird Fantasy edition), with background color removed.

This issue of NOD features:

* Gloriana’s Blessed Isle, Part 2 – The continuation of the Ulflandia hex crawl that started in NOD 26 – this one covers a little of the island, the Bragart Hills, the southern portion of the Klarkash Mountains and a wee bit of the Wyvern Coast … a real cross roads. Features some groovy art by Denis McCarthy

* d20 Mecha I: The Classes – The first part of a three part article on adapting d20-based games for giant robot adventures – by my good friend and mecha-aficionado Luke DeGraw. Part 2 will cover equipment, and in Part 3 we’re going to collaborate on simplified rules for the mecha themselves, using some of the rules I’ve developed for GRIT & VIGOR.

* The Muscleman – A new class that puts strength to the test … yeah, he can bite through chains and throw halflings … nice art by NOD regular Jon Kaufman

* Plan 9 from Outer Space: The RPG – A Quick & Easy minigame for Halloween … I’m super excited about this silly thing 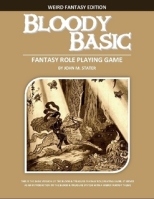 I know some folks have been waiting for this one. The Weird Fantasy Edition rules are inspired by the wondrous prose and poetry of Clark Ashton Smith and Lord Dunsany and the art of such luminaries as Aubrey Beardsley and Sidney Sime. It include rules for the races, classes, spells and monsters of weird fantasy tales. Ever wanted to play a grotesque puissant? Now’s your chance.

This one was briefly in the Top 10 hottest titles on rpgnow … pretty cool!

Can you survive the mean streets of New York City in the 1970’s? Muggers, psychos, junkies, sewer-gators, street punks, and gangsters! Oh My!

Deviant Decade is a quick and easy game to learn and play. All you need is a few friends, some pencils and paper, a few ordinary dice and this book … leisure suits are optional.

$2.99 for the e-book (no stagflation here) … print edition coming soon

For sale now at both Lulu and Drive Thru / Rpgnow

Well, I think that’s enough productivity for the moment. I’m working on Black Death (coming along nicely – and a little more meat than past Quick & Easy games – I think Swords & Sandals will need a revision next year) and NOD 28 (exploring the northern Land of Og in this one) now, and I’m determined to get GRIT & VIGOR released by the end of the year.