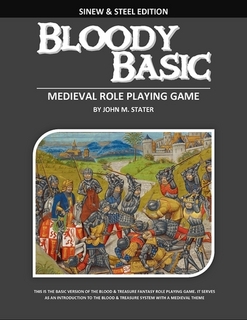 Before we get to the random table, I’d like to announce that Bloody Basic – Sinew & Steel Edition is now up for sale at Lulu.com as a PDF (the book will follow). This is basic role-playing without the magic – imagine if the original fantasy game had been based on the medieval war game rules without the fantasy supplement included.

Races are exchanged for Social Ranks, classes are Armsman, Scholar and Villein, and to make up for all the space normally taken up by spells, fantasy monsters and magic items, I included some simple rules for mass combat, sieges, jousting and archery tournaments. The rules are still pretty short, so the book only costs $6.99 – not too bad. Click on the title to check it out at Lulu.

I should get NOD 26 up for sale tonight as a PDF. When I get my review copies, the books will follow. More on that later.

And now, back to our regularly scheduled program …

What I Found Under the Loose Dungeon Floor Tile (Roll d20)

1. A yawning abyss – it is cold, and light flute music can be heard from within it

3. A rope loop – pull it to set off all the traps on this level of the dungeon

4. A wooden box – holds …
A. The ashen remains of a vampire
B. Mummy bandages
C. Incense cubes – varying scents, one casts a cloudkill spell
D. Candle stubs – one holds a key to an important room in this dungeon
E. Chicken bones
F. Shuriken, one is a +1 shuriken
G. 1 week of iron rations
H. A vial of holy water
I. A collection of glass eyes
J. Silver pince-nez

7. Green slime – actually forms a layer under the entire floor, and will bubble up through the cracks at an inopportune time

8. Last will and testament of a high level adventurer

9. Map of a lower level (incomplete)

10. Intense light (save vs. blindness)

11. Nothing – but causes a steel cage to materialize around the adventurers

12. Nothing – but removing it causes the dungeon illusion the adventurers have been in to disappear, revealing they are in an alien laboratory (break out Star Frontiers!)

13. An oil slick (Texas tea!) – begins pouring up and soon covers most of this level of the dungeon (same effect as grease spell)

14. An intelligent +2 dagger with a note – the dagger will obey so long as its wielder commits to assassinating a local dignitary or royal within 1 week; turns into a -2 cursed dagger if this is not done

15. A long, narrow shaft to a pocket dungeon level or just a lower level of the dungeon

16. A grasping hand on a long arm (treat as a ghoul or wight)

18. A carved stone that tells the dungeon’s history (or fills in gaps in the characters’ knowledge)

19. Black tentacles (per the spell) erupt from the floor

20. A portal back to the dungeon entrance (works once, afterwards, it just sends people to random rooms on deeper levels)

One thought on “Found Under the Loose Dungeon Floor Tile …”