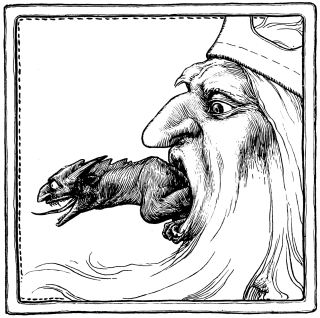 First – I should get the Bloody Basic Sinew & Steel Edition up for sale in the next couple days, along with the next issue of NOD – number 26. Just finishing things up, last bits of editing, etc. BB Weird Fantasy is next, and then I delve into Grit & Vigor and get that bad boy done and up for sale.

Now, on to the monsters …

Engines of Hell are monstrous, brazen constructs operated by imps. They are armored suits of bronze and brass, often of monstrous shape and form, and glowing red hot. Smoke escapes from the nostrils fashioned on the engine’s brazen head. The imp sits within the chest cavity, operating the construct with levers and chains.

Engines of Hell have no minds of their own. They are under the control of the imp. If the imp is removed, killed, etc. the construct ceases operating. Attacks that require a Will save that are directed against the pilot imp must be made by the pilot imp, not the construct.

All Engines of Hell have the above basic statistics. In addition, they can choose one of the following modifications from each category:

HANDS
Cannon Arms: The construct can make 1d8 damage slam attacks with its cannon arms at a -1 penalty (they are clumsy), but can also use them to fire cannonballs (3d6 damage, 100’ range) up to three times per arm.

Chain Hands: The construct has 10-ft chains instead of hands, allowing it to slash targets up to 10 feet away for 1d8 damage.

Jackhammer Hands: The construct’s hands are actually jackhammers, doubling its attacks and dealing 1d8 damage. In addition, hits warded away by armor or shields force those items to pass a saving throw or be made useless.

Flame Belcher: Construct can, three times per day, belch forth a 10’ cone of fire for 3d6 damage.

FEET
Quake Makers: One per day, the construct can produce the same effect as the stomp spell, non-magically.

Raking Claws: The construct gain an addition claw attack for 2d6 damage with its feet.

Rocket Boots: The construct can, once per day, fire boot rockets and leap a distance and height equal to 100 feet (i.e. 100 feet high, straight up, 100 feet distant without really leaving the ground, 50 feet high and 50 feet distant, etc.).

Lady lions are mortal versions of Sekhmet, the goddess of slaughter and vengeance. Delivered unto the Material Plane by the gods or other similar powers, they are intended to cut a swathe of death as a means of reminding people of their mortality and their inferior position to the gods. On some occasions, they are brought to the Material Plane to complete a quest, and in this capacity might work with or against the player characters.

Lady lions look like tall female humanoids with faces that suggest the ferocity and grandeur of the lioness. Their limbs are long and muscular, their bodies powerful and lean. Lady lions wear armor of steel cords and wield twin +1 scimitars, attacking twice per round with each scimitar.

The lady lion’s magical scimitars cause bleeding wounds. Those struck who fail a Fortitude saving throw begin losing one point of constitution per round from blood loss until magical healing is applied. The TK should keep track of lost constitution points. For every three points of lost constitution, from whatever source, the lady lion can animate the blood into a monster per the spell summon monster I. The monster in question looks as though it were composed of blood, but will otherwise act as a normal monster of its type. These blood monsters, if they do not attack, can merge forms into more powerful monsters, essentially combining their hit dice and taking a new, appropriate form. Two 1 HD giant blood rats, for example, could form into a 2 HD blood wolf. These monsters can be dispelled, but reformed a round later. Once formed, they do not have to be controlled by the lady lion, and can combine on their own, without direction (i.e. without the lady lion having to forgo attacking for a round).

Once per day, a lady lion can transform herself, for one round, into a blade barrier.

Megalars are huge reptiles with big feet. They have a rather flat body profile, and walk low to the ground. Wherever a megalar stomps a foot (they can stomp two feet per round), a jet of hot, flammable gasses explodes from the ground. This is, essentially, a one-way portal to the Elemental Plane of Combustion. These pillars deal 1d6 points of fire damage to all within 10 feet due to their extreme temperature, and burst into flames if they contact an open fire. A flaming pillar burns for one turn, dealing 2d6 damage to the touch, and 1d6 damage to all within 10 feet.

A nemesis is an extraplanar spirit called into the Material Plane to punish a mortal creature. They are usually summoned by powerful clerics or magic-users, or they are sent by extraplanar powers. A nemesis’ form varies with the creature it is fighting.

Against warriors and monsters that primarily rely on, the nemesis seals itself in a shell of living steel. It has AC 22 and attacks with weapons formed from the living steel –any two one-handed weapons, dealing +2 damage with each. The steel-form nemesis has a movement rate of 20 and is immune to all combat maneuvers.

Against thieves and assassins, the nemesis takes on a shadow form. In shadow form, they automatically hide in shadows and move silently. They have AC 16 [Silver] and a movement rate of 60. Shadow nemeses attack with two shadow daggers that deal 1d4 damage and force a fortitude saving throw to avoid being chilled to the heart (1d4 constitution damage, stunned for one round). They can backstab for triple damage.

The nemesis can change its form once per round. They are single-minded in their quests to punish or destroy. When their quest is complete, or they are destroyed, they return to their plane of origin in the Pleiades Star Cluster.

A vasculon is a construct composed of human veins, arteries, ganglia and nervous system encased inside a humanoid shaped glassy-steel shell. In place of eyes, the vasculon as four bloodstones set on its head. Each round that it does not attack physically, it can fire scarlet rays from these eyes at up to four separate targets. These rays ignore armor, and have the following effects:

Boil Blood: 2d6 fire damage; Fortitude save for half

Gout of Blood: Creature bleeds from its orifices, 1d6 damage plus 1 point of Con damage

Manipulate Humors: Creature struck with fear (as cause fear spell), crushing despair (as spell) or rage (as spell)

Each ray can only be used once per round, and each ray must be directed at a different target. Attacks against the bloodstones are made against AC 20, and each bloodstone has 20 hit points.

Zordoks look like glowing spheres surrounded by orbiting motes of light, not unlike the way atoms are sometimes fancifully depicted. A zordok can launch a lightning bolt attack that, if it hits, transfers its consciousness into a living person. The person then gains the Galvanized template (see below), and also suffers one level of energy damage. This energy damage increases the zordok’s size by one step (+1 HD, +2 damage) and increases its intelligence by one step (low to average, average to high, high to super).

The zordok can move its consciousness from body to body by firing its electrical arcs. Each time it does, the new target suffers one level of energy damage and the zordok’s original body becomes larger and more intelligent.

If the host of the zordok’s consciousness is killed or knocked unconscious, the zordok’s body is turned into a tiny adamantine sphere. The creature will reconstitute itself in 1d4 days at its original 3 HD power level.

Special Qualities: Immune to electricity, resistance to fire and cold

A galvanized creature is immune to electricity and can use the shocking hands and levitate spells at will. If grounded, they must pass a Fortitude saving throw or be knocked unconscious for 1d6 rounds.