A couple years ago I had a little brainstorm that resulted in an article for NOD involving fantasy Napoleonic-era wars in a North America divided into a number of competing nations, not unlike the Europe of the real Napoleonic era. I planned to turn it into a game called 1800 – American Empires, and then … well, I got a bit off-track.

First and foremost, I got started on something called Blood & Treasure, and that sure took up a chunk of my time. Secondly, the huge hex map of North America I painstakingly created was lost due to a computer crash (don’t worry, my daughter now has a much better understanding of what we do and do not click on on the internet). That really took the hydrogen out of my blimp.

Well, even though it was put on the back burner, American Empires never completely left my brain. I still love the idea of the thing, and I think it’s just about ripe for development. Now that I’ve put together the framework of Bloody Basic, I think it would serve as a great little engine for the game. (By the by – still need to produce the soft-cover book for Bloody Basic … dang, the time sure flies).

Grit & Vigor still has to take precedence once I’ve finished with the B&T Monster Tome (should be on sale next week, if all goes well). But once G&V is finished, and while I work on the next issue of NOD, I’m going to put some work into American Empires. Four classes (scout, soldier, venturer and magician), just one race, humans (though some other humanoids will show up as monsters, with some options for using them to play), a nice gazatteer of fantasy Napoleonic America (including a Napoleon-ruled Louisiana, Jefferson’s Virginia Commonwealth, the stern Yankees of New England, Aaron Burr’s Texican Republic and those red coats up on Canada), and lots of rules aimed at wilderness exploration (really wilderness as dungeon), armies and stronghold, colony and nation building. Should be a blast, and I look forward to doing it.

Now, since this post has been nothing but a commercial, I feel compelled to give a couple sample monsters from the Monster Tome, art included. 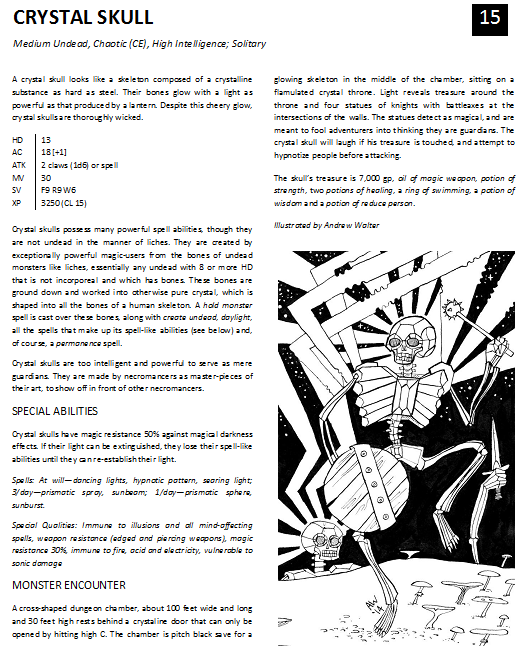