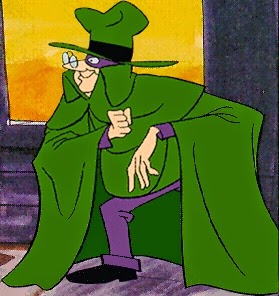 You’ve fought your way into the evil lord’s citadel or the inner sanctum of the chaos cult. You’ve eliminated the guards. You are locked in battle with the masked overlord of all evil and in a brief pause in the fighting reach out and snatch away their mask. You gasp as you see …

1-2. The Archduke or Archduchess

5-6. A faceless horror, or something with tentacles so the party can say, “Seriously, more Lovecraft?”

7-8. A goblin (he’s standing on another goblin’s shoulders)

11-12. Your ex-lover or ex-mate or ex-best friend who always secretly resented you

19-20. Second man-at-arms from the left at the front gate who, now that you think of it, was giving you a funny look when you entered the city

21-22. The hunchbacked hedge wizard who hawks magic charms in the town square – turns out he’s a 15th level magic-user

33-34. The mummified face of some the ancient pharaoh on display in the museum

41-42. Your evil twin brother or sister who was thought to have died in the barn fire

43-44. The head of the local merchant company

45-46. The local guildmaster of thieves

49-50. A polymorphed fire giant, and that mask was what kept the spell in play

51-52. A brilliant light (choose a color) in place of a head that messes with your mind

55-56. A tangle of vines and two emerald orbs for eyes

57-58. An elf lady knight from the far woodlands

59-60. A flesh golem with a psychic’s disembodied brain sutured to its head

65-66. A grey alien with a headband of pain of dominance

69-70. The wizened old magic-user you thought was your greatest ally

77-78. A primordial ooze thing that collapses into a blob of destruction

79-80. That dummy used by the seemingly harmless bard in the local tavern

83-84. A really stupid and confused gorilla

91-92. The emperor everyone thought was lost

93-94. The mad genius that designed the automaton palace guards

95-96. An astral deva that has taken Lawful Good to an unhealthy level

97-98. The Riddler (unfortunately, as played by John Astin, not Frank Gorshin)

99-100. The robe collapses, because the meme has been revealed

3 thoughts on “Who’s Under that Mask?”