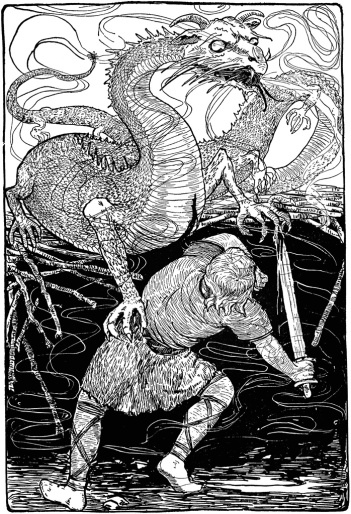 On my walk today, I started thinking about variations on Blood & Treasure (and all the games it is based on, of course) combat. The traditional form is for one entity to make an attack roll against a static defense score, followed by its opponent (or opponents) doing the same, each success causing damage until somebody is out of hit points.

It occurred to me that a different effect could be achieved by each entity in a combat rolling a d20 at the same time in an attempt to out-roll their opponent. Whoever rolls the highest in this little duel wins the round and deals damage. Again, repeat until somebody is out of hit points.

The first step to running this combat is to calculate the entity’s total combat bonus (TCB, if you’re an Elvis fan).

The miscellaneous modifiers would be from magic weapons, special abilities, fighting with two weapons, or in B&T any tactical advantages a character manages to have.

When it comes time to fight, each combatant rolls 1d20 and adds their TCB. Whoever rolls the highest wins the round and the loser suffers normal damage (or other effects) from the attack form being employed by the attacker.

When multiple entities are attacking a single entity, they can either pool their TCB’s for a single roll, or each can take a tactical advantage and roll separately. If rolling separately, the defender must then roll against each of them, splitting his TCB as he sees fit.

Monsters with multiple attacks (including fighters or two-weapon wielding characters) can either direct each attack (with full TCB added to each) against multiple opponents, or concentrate attacks (combining damage) against single opponents.

This could be an interesting way to alter the generally accepted tactics of B&T-style combat. Things in this system could go badly very quickly, which might make things more “grim and gritty”. Then again, since its totally untested, this system might just completely screw up your game!

If you try this out, let me know how it worked in the comments or via email.