This idea came to me a few days ago. There is a tradition in RPG’s of turning unique monsters from mythology and turning them into “species of monsters”, Medusa and Pegasus being but two examples. The other day, I was thinking about using the gods of various pantheons as inspiration for designing demi-human races for RPG’s.

This first go at the concept draws inspiration from Norse mythology. 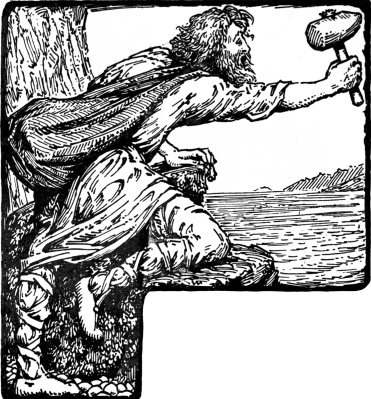 THUNORS
The thunors are tall humanoids with ruddy skin, copious manes of hair in various shades of red (and, very rarely, blond) and eyes that range from blue to grey. They are usually quite strong, with large, meaty hands and faces that suggest an angry Neanderthal. Thunors are good-hearted and hate bullies, but they are also boisterous, assertive, aggressive, stubborn, and prone to solving problems with brute force. Most thunors are aligned with Law.

Despite averaging about 7 feet tall and built like brick houses, thunors are only medium-sized creatures. Their powerful shanks propel them forward at a speed of 30 feet per round. They can see in the dark up to 60 feet. This “darkvision” is in black and white only, but it is otherwise like normal sight.

Thunors are built like oxen and add one point to their starting strength and constitution scores. They are not, however, known for their brain power or self-control, and so must deduct one point from their starting intelligence and wisdom scores. These ability modifications cannot increase a score above 18 or reduce it a score below 3.

Thunors have a mystic connection to both the earth and sky. They are capable of treating half of the damage from their melee attacks with metal weapons as electricity or sonic damage. This is useful for overcoming some creatures’ resistance to weapon damage. When a thunor scores electricity damage, his weapon is surrounded in crackling electricity, and when he scores sonic damage, his hits are accompanied by a thunderous boom.

Thunors are +1 to hit giants, ettins and ogres in combat.

While they do not care much for magic or magic items other than magic weapons and armor, they will deign to use gauntlets of ogre strength and belts of giant strength. Thunor are also capable of using dwarven throwers.

Thunors speak Common and Thunor. They might also speak Dwarf, Elf, Ettin, Kobold and the various languages of the giants. 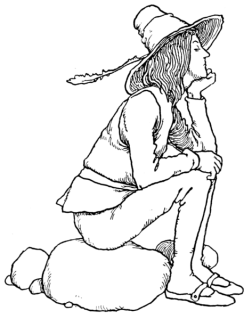 The freylings are lithe, comely folk with large, violet eyes, alabaster skin and hair of copper, silver or gold. Freylings stand about 4 to 5 feet tall, and their narrow frames make them look very fragile. They delight in the sensuous, and have a bad habit of charming people of the opposite sex just for the fun of doing; the feelings of others rarely enter into their calculations.

Because of their height and slender frames, freylings count as small creatures with a base speed of 30 feet.

Freylings tend to be beautiful and vivacious, allowing them to add one to their starting charisma score. Their slight frames tend to be on the weak side, though, so they must deduct one point from their starting strength scores. These ability modifications cannot increase a score above 18 or reduce it a score below 3.

Freylings have darkvision to a range of 120 feet. They can make their bodies glow (per the light spell) for up to a total of 10 minutes. In addition, once per day they can assume the shape of a falcon, cat or boar for 1 round + 1 round per character level. When in this form, they retain their attack bonus and mental ability scores and abilities, but use the attack forms and damage of their new form. They also have any physical abilities of their new form.

WOTANI
The wotani are a strange, reclusive race of humanoids. They have a slightly simian appearance, their bodies covered with taupe colored hair (it turns white as they age), with only the burgundy colored skin of their faces, palms and the bottom of their feet showing. Wotani walk with a hunch. They have one golden eye, and one eye of pure black.

Wotani are small creatures with a movement rate of 20 feet per round. They have darkvision to a range of 60 feet and have a knack for finding secret doors.

The wotani are wise souls, and add one point to their starting wisdom score. Their propensity to speak in riddles and manipulate people makes them unpopular with folks, and so they deduct one from their starting charisma score. These ability modifications cannot increase a score above 18 or reduce it below 3.

Wotani have a natural affinity for divination spells. A wotani with a wisdom score of 10 or higher can cast the following spells, each once per day: Augury, detect evil and detect magic. Wotani receive a +2 bonus on Will saving throws against divination spells.

Wotani speak Common and Wotan. They might also speak Celestial, the Elemental tongues, Fiendish and Sylvan.

Wotani may multi-class as cleric/diviners, diviner/fighters and diviner thieves. The diviner is a specialist type of magic-user.

LOKAI
Lokais are nimble little bastards, thoroughly untrusthworthy and always scheming. They have swarthy skin, eyes that burn like hot coals (usually red, but intensifying to white and blue when the lokai is scheming) and their hair is actually a flickering flame (bright as a lantern, but they can dim it to a very dim radiance).

The lokai are graceful and slim, and stand about 5 to 6 feet tall. They count as medium-sized creatures and have a base movement rate of 40 feet per round. They have darkvision to a range of 120 feet and have a knack for picking pockets and trickery.

A lokai’s lithe form gives it a bonus of one point to its starting dexterity score. Their silver tongues also give them a one point bonus to their starting charisma score. Unfortunately, they lack in muscle mass and must deduct one point from their starting strength score. These ability modifications cannot increase a score above 18 or reduce it below 3.

Lokai enjoy a +3 save vs. fire and fire spells. They have a +2 bonus to save vs. magic, and can see magical auras (per the detect magic spell). They enjoy a +1 bonus to hit with daggers and darts.

7 thoughts on “Demi-Humans Inspired by the Norse Mythos”