Today, I present three giants to confound (and stomp on) you precious PC’s. 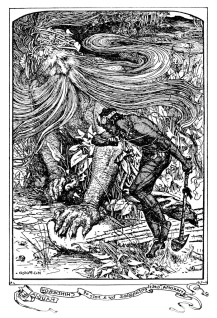 River giants are the children of the great rivers. They appear as massive humanoids with long, grey mustaches and beards which seem to flow and ripple with a will of their own. They dwell within rivers, sometimes in simple caves, but more often in submerged strongholds with courts of nixies and river nymphs.

In combat, a river giant can breathe forth, once per day, a fetid mist per the obscuring mist spell. Those trapped within the mist must pass a single Fortitude saving throw or succumb to filth fever. Their mustaches and beards can be used as tendrils to grab and constrict attackers. 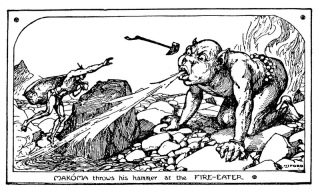 The jinnati, or fire-eaters, are a breed of fire-breathing ogres who dwell in volcanic hills in tropical regions. They have ruddy to dull green skin, lustrous black hair and sparkling eyes that suggest clever malevolence. Jinnati rarely wear armor, though when they do it is usually formed of glowing, red scales, and likewise when they arm themselves they do so with metal weapons. They have a profound lust for reddish and orange gemstones, and will almost anything to possess them, even behave honorably.

Jinnati can breathe a 15-ft. long line of fire once per day. This fire deals as many hit points of damage as the jinnati currently possesses (or half that with a successful Reflex saving throw). They can recharge this fire breath by eating fire – that is, inhaling flames from any sort of source larger than a torch.

Creatures grappled by the monsters suffer as though from a heat metal spell, in addition to suffering normal grapple damage.

Stalos are magical ogres that haunt the northern woodlands and steppes. They have dark brown to nearly black skin, leering yellow eyes and pronounced fangs.

A stalo possesses a set of pipes not unlike those of a satyr. When playing those pipes, those within 1 mile must pass a Will saving throw or be charmed (per the charm person spell) and convinced that they must journey to the source of the piping. Subjects within 30 feet of the piping must make an additional Will save or be held (per the hold person spell) for 1d6 rounds, during which time the stalo will kill them for its supper. A stalo can track unerringly on his home territory.

A stalo has one weakness, and that is running water. While they can cross running water, they do so slowly (movement rate of 5) and must pass a Will save each round or be either frozen with fear for one round.