A new year has dawned, and February brings us an interesting cover combining a photo of miniatures, a photo of what I’m guessing are some SCA’ers bludgeoning one another, and an illustration of fantasy swordplay. Given that the byline on the cover is “Little Wars“, one can imagine what lies inside.

As has become a tradition of this series, the first thing I manage to fall in love with is the latest Ral Partha advert. If I’m completely honest, I’m not usually that enthused about their sculptures, but I love the names and notions. In this case, it’s the Army of Mu’ugalavya! I think it would make a good random encounter for any campaign – imagine a plane hopping army of conquerors carving out footholds on a thousand material planes.

When encountered, the army consists of the following:

When encountered, roll a reaction check:

Friendly – the army attempts to recruit the party, promising them a share of any plunder they get

Our first article is The First Assassins by James E. Bruner, a study on the infamous Order of Assassins that once plagued the Middle East. The article gives a history of the organization. It’s really a fascinating story, and if applied to the assassins of AD&D (and its simulacra) would make that class infinitely more interesting. Imagine a world populated not with rangers who were mere fighters of the greenwood and assassins who were mere men-in-black with poisoned knives, but with the Numenoreans of Tolkien and the cultists Hasan Sabbah (or his simulacra) bent on overthrowing the most powerful religious leader in the known world. One should also note that the real assassins had their own level titles: In order from lowest to highest they were Adherents, Companions, Propagandists (remember, they were primarily preachers attempting to undermine the Caliphate that they may replace the Caliph with a member of their own sect), Greater Propagandists and Grand Headmaster of the Order.

The history continues in this issue with Irresistible Force – A Brief Account of the Rise of the Swiss Confederation with Commentary on Their Military Tactics by Gary Gygax (one can imagine from the title how brief the article will end up being). It’s quite an interesting article as well, and contains one of those percentile charts of the Swiss Army that readers of the old Monster Manual will recognize well. An army book like this would have been pretty cool back in the day – sort of a “Monster Manual” of ancient, medieval and renaissance armies. I’d like to produce something similar myself one of these days for Blood & Treasure.

Nick Nascati follows this up with Armies of the Renaissance – Part One. This article gives a brief overview of what is to come, with some history of the period (the great generals of the period, the mercenaries (which seem to be the inspiration for all those bandit troops led by high-level fighters in AD&D) and artillery).

Review time! This issue covers the following games (and I’ll include the concluding paragraph of each review):

Boardgame – Up-Scope!: “Still, you take what you can get. This one isn’t bad. I just wish it were better. Play it, before you buy it, to find whether you’ll love it or hate it. — Dave Minch”

Book – The Face in the Frost: “This well-written novel of strange hauntings, sorcerous conjurations, and outrageous humor can not be recommended too highly! Go out and get a copy right now, but be prepared to spend a long, uninterrupted period of time reading it, for you won’t want to put it away until it is finished once you begin!

(I concur on this one – great book)

Boardgame – Panzerkrieg: “All in all, this is a game which is every bit worth its $12.95 pricetag. Not only is the game colorful and well-done graphically, but it provides excellent play value for the money with its eight scenarios, each one a bit different from the others — and some with the Russians on defense, others with the Russians on the attack. There are some minor flaws, (more playtesting would have helped), but these are far outweighed by the game’s advantages and overall appeal. I recommend this title to anyone who enjoys the Eastern Front, or who simply enjoys a good historical game no matter what the subject. — Mike Carr”

Magazines – Apprentice #2 and Phoenix: “APPRENTICE is certainly bad, but for one dollar it is a value if you appreciate jokes. PHOENIX is worse, and no price is given. If it is free, you might wish to get it. – Gary Gygax”

(Bear in mind, this review came after the magazines in question wrote a bad review of The Dragon) 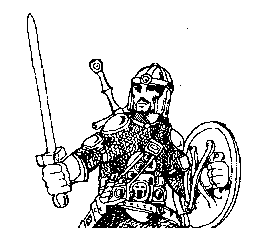 Up next is a big installment of Mapping the Dungeons, which presents DM’s and gaming groups and their addresses from around the U.S. and beyond. Not much of interest here other than the historical record of early players of role playing games, but I did like the little piece of art at the end by McLean. I love his comic pieces, of course, but I would have liked to have seen more of his serious stuff appear in old TSR publications.

Gary Gygax now chimes in with Dungeons & Dragon – What It Is and Where It Is Going. He mentions that perhaps 150,000 people now play D&D, and gives a brief synopsis of its history and the future he envisioned for it. He brings up AD&D, modules and similar material and … computers! One line I did like was this:

“It is my personal opinion that the game form is a classic which is of the same stamp as chess and MONOPOLY® ; time will be the judge.”

I think he got that one right, though the present copyright holders seem to be bent on proving him wrong.

Up next is an examination of a new game from TSR called 4th Dimension – a game that sounds like a mix of chess and Stratego that involves capturing an opposing Time-Lord on a circular board divided into variably sized spaces. Honestly – never heard of this one, though it sounds pretty cool. Here’s a link to Game Board Geek’s page on the game.

This is followed by a multi-page preview of the AD&D DMG – essentially a few pages from the magic items section and the attack matrices and a few more bits.

If anyone doubts that Gary Gygax did not appreciate negative criticism, one need only pick up this issue of The Dragon. He already savaged a couple fanzines, and now he offers a review of a review of AD&D’s Player’s Handbook in SPI’s house mag, Strategy & Tactics. A sample …

“What is worthy of comment, however, is the source of the critical commentary on AD&D being nothing more than a rewrite of D&D. Coming from an officer of SPI, the past masters of the rehash, artisans of the warmed-over WWII battle game, purveyors of the umpteenth version of the same, tired scenario, it is indeed a wonder that Mr. Berg would bring up such a spectre!”

I have a feeling these snipes probably turned more people away from D&D than the bad reviews.

Stalemate at Kassala is a play report of a war game that re-enacted a battle in 1541, when the Portuguese sent 400 infantry with 1000 stand of firearms and some cannon to aid the Ethiopian emperor Galawedos against an army of invading Egyptians and their Nubian allies. As you can tell from the title, it ended in stalemate.

Finieous Fingers then runs into “Grollem” and buys his precious ring of invisibility off him for 1,000 gp (actually turns out to be a fake sold by a hobbit in a Grollem suit), and then wanders into a dragon horde, where he discovers just how fake the ring is.

Ah – a classic article comes up next – Gygax’s Nomenclature of Pole Arms. I’ll say no more, for the truly initiated of the RPG community know all about it.

That’s it for February 1979! Not a bad issue really, especially because it reinforces the importance of history in D&D – it ain’t just fantasy folks.