The point of a bogeyman is to create a campaign (or mini campaign or side trek) around figuring out how to kill the damned thing. That means researching the killing ritual. Here, horror movies aren’t quite as helpful as they’ve been before, because most horror movies that involve a bogeyman become series that NEVER FREAKING END. The only killing ritual that can put Jason, Michael Myers or Freddie down permanently is low ticket sales … and even then only until Hollywood thinks it can pull off a “re-boot”. For our purposes, though, we need to have an end to these campaigns of terror.

The how of killing might have something to do with the bogeyman’s origin, and then again, it might not. It could also just be some weird ritual that must be taught by the reclusive monks in those far-away mountains you’d like to introduce to your players.

The killing ritual should involve one or more element or step. The more experienced the players (not the characters), the more elements you can get away with, but more than three is probably going to get tedious. There might be a teacher or dusty old tome that can reveal the entire killing ritual, or perhaps the adventurers must track down each element separately. In such a case, it might be a good idea to weave the killing ritual in with the monster’s history (an example to follow), so that as players learn about the bogeyman’s history, they gain clues on how to destroy him.

Some elements you might consider for your killing ritual:

Hit Location – much like a vampire needing a stake to the heart to keep it down, Achilles’ infamous heel or Smaug’s missing scale, the monster can only be killed if struck at a certain point on its body. Unless the monster is stunned/paralyzed/subdued/etc., this brings a combat element into the game and might please the more combat-oriented players who otherwise couldn’t give a copper for solving the monster’s riddle.

Substance – the idea of needing special substances to kill monsters is not new to D&D – silver for lycanthropes, cold iron for some fey, wooden stakes for vampires, magic weapons to harm demons, etc. For a bogeyman, think outside these narrow bounds – Loki using mistletoe to kill Baldr comes to mind, or how about a silver spearhead anointed with a virgin’s tears? It might also be a particular weapon – the sword of Sir Magnus the Moldy, for example – that necessitates a brief quest to find the weapon (a quest which, incidentally, might help to keep the dungeon crawlers in the party happy).

Actor – the monster might require a specific kind of actor to kill it. This can get a bit dicey, as it might take the adventurers of the game just a little bit. Sure, they have to work hard to find the seventh son of a seventh son and convince him to accompany them to kill some monster he’s never heard of, but then the final stroke of the campaign comes from an NPC and that might lessen the satisfaction of the victory for the players. An “actor” requirement could also be something like, “a person who has kissed the Blarney Stone” or “a person who has lost a loved one to the monster” – something that can qualify one or more characters. Even using a PC as the final actor can create trouble – what if the killing blow falls on the shoulders of the halfling thief and two or three other PC’s buy the farm while that player suffers through some lousy hit rolls? An actor is definitely an appropriate element to the killing ritual, but just use it with your eyes wide open to the potential problems it can create.

Time – The time element involves something like: Can only be killed under a new/full/crescent moon; can only be killed at sunrise; can only be killed on a holy day; etc.. The value of a time element is to create a sense of urgency. Whatever the time element, it should be soon, so the adventurers must race to meet the deadline or suffer through another day or week of attacks that might claim new victims. You probably want to keep the interval between potential killings short, else the bogeyman side trek might outstay its welcome at the game table.

Place – A special place to kill a bogeyman might be fun as well, as it means the players have to figure out a way to lure the bogeyman to its undoing. Now, obviously, an intelligent bogeyman should not willingly let itself be lured to the one place it can be destroyed, so try to remember you’re working with an archetypal story here – just roll with it. It doesn’t have to be easy to lure the monster, but don’t make it ridiculously difficult. Good places might be the site of the bogeyman’s creation, an abandoned temple in a lonely wilderness, a holy site, the crater left over from a meteor impact, an active (or soon to be active) volcano, etc. 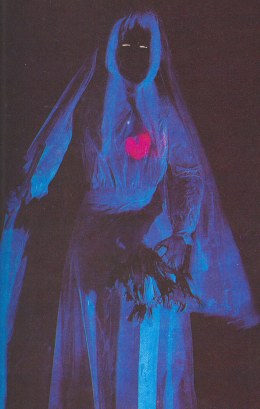 A maiden desperately in love with a wicked man was lured by promises of marriage into a lonely wood, where she was murdered. Now, on nights when the moon is new, a bogeyman composed of the psychic residue of the unfortunate woman (i.e. she isn’t undead) might appear to travelers (the locals know better than to travel during a new moon, but they don’t know why – just an old superstition) as a beautiful maiden with red-rimmed eyes who is accompanied by an audible heart beat – it throbs in people’s ears and causes fear (especially in henchmen and animals).

The murdered maiden will be drawn to killing any men in the party, and will also begin attacking descendants of her murderer, who still live in the nearby village. Assume the murder happened 50 years ago, so there probably are a few elders who remember what happened and can clue people in to the event. The murderer was probably a high placed person in the village, or perhaps was a cat’s paw for somebody else. Maybe the maiden’s stepmother wanted her out of the way?

In this case, the killing ritual involves plunging a gold ring (it was promised to her, and she might howl about it while attacking) into the bogeyman’s (bogeywoman’s?) heart. The most likely way is to slip the ring onto a blade or arrow. This must be done during the night of a full moon. Her destroyer must also deliver a heartfelt apology or must shed a tear while delivering the killing blow or the bogeyman will only disappear for a year and then will return to plague the adventurers.