And so we come to #8, which kicks off with an article on The Planes from Gary Gygax, subtitled “The Concepts of Spatial, Temporal and Physical Relations in D&D”. I guess this has to be considered a pretty important article, as it sets up the famous “Wheel” cosmology that will come to be a basis of AD&D (both editions) and achieve its full flowering in the Planescape setting. I personally don’t use it these days, but I think you have to admit it was a clever way of setting up a cosmos and finding a place for all the various gods and goddesses.

Tony Watson now offers a more practical article: The Development of Towns in D&D. The advice in the article is quite sound, from what I can tell. I like his advice for inns and their patrons, to whit:

Falgrave’s – where non-humans frequent and and stay when in town. Falgrave is a dwarf himself and up on non-human gossip. 3-18 patrons, 2/3 of which shall be non-human and ½ will be warriors; the rest will be townspeople, nonhumans of other classes. 1-4 will be non-human wayfarers or merchants.

Simple and seems like it would work well. For populating the town, he suggests rolling up dozens of characters and then assigning them, based on their ability scores, to different jobs … or you could just fake it. He divides them into Warriors, Magic-Users, Clerics, Townspeople and Specialists (referring to the “myriad of new characters types that have lately appeared”, which I assume means new classes from The Dragon). He suggests rolling 3d4 for the ability scores of the townspeople or 2d6 for women rolling Str and Con (he apologizes to liberated women reading the article) and children rolling scores. Watson then provides a small chart for determining alignment, age, personality, loyalty, initiative and level. Initiative, in this case, does not mean combat initiative order, but how bright and energetic an NPC is.

Up next is a story by Harry O. Fischer: The Finzer Family – A Tale of Modern Magic.

There have also been wicked magicians, but they only last a short time and are soon taken care of by the public or by other magicians. The evil ones are generally weak and unsuccessful people with little powerful magic. This is fortunate for all of us. Once in a while a powerful and good magician may go mad and do considerable damage before he is controlled or eliminated, but these cases are very rare. So any magicians you are likely to meet or to know, or to perhaps discover, are almost sure to be honorable, peaceful, and wise people — like the Finzers . . .

No offense, but this one went on so long I got bored skipping through it.

Next we have a sneak preview of Introduction to: Gamma World. It begins:

Man, from Australopithecus africanus and homo erectus erectus to homo sapiens recens, has existed on earth for hundreds of thousands, perhaps millions of years. During this time, one skill, one particular talent has set him apart from every other creature — his ability to conceive and create tools. Indeed, man has been defined as “the toolmaking animal.”

Next to an ad for Archive Miniatures (that includes pictures of a Wind Child, Dragon Newts and Dracula & Vampire Women) is an article by Rob Kuntz on gems and jewelry that is essentially a collection of useful tables for determining first the carats of the gem, then the value and then the type based on the value. My only disagreement is that it uses gems like “idicolite” and “tanzanite” that just don’t seem very romantic.

Brian Blume asks, So You Want Realism in D&D? It’s a bit of a jab at people that have written to complain about the lack of … well, you know.

The next page shows off several miniatures, including Rhino Riders from Dragontooth Miniatures. I’ve admitted before that I’m a sucker for fantasy characters riding on inappropriate mounts, so this one is right up my alley. I found a picture online … 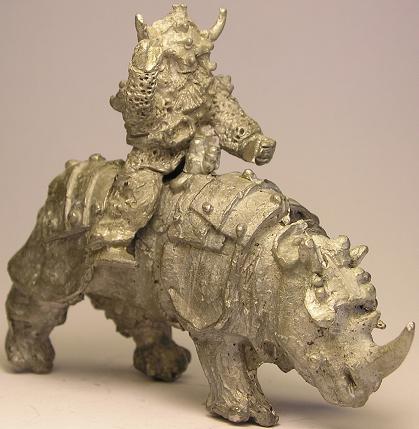 Given the size of the rider compared to the rhino, it almost has to be a giant of some sort.

Featured Creature this time presents a kick-ass piece of art by Erol Otus and asks people to name it and give it some stats. Let’s do the same thing here in the comments! 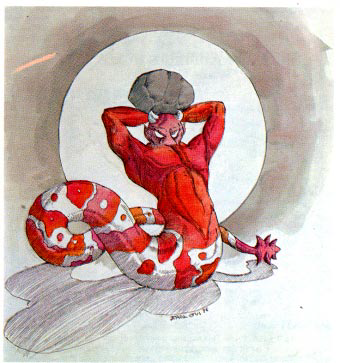 And so ends issue #8! Not bad, but the one story was waaaaaay too long (and is only part 1!!!). What relevant stuff was there was pretty decent.