Happy birthday The Dragon! June 1977 marked the beginning of the second year of the magazine’s publication. Kask starts off by bragging on the improvement in the art and the 300% growth in circulation in a year (which could mean they went from selling 1 copy a month to selling 3 … but I think they were doing better than that). Kask goes on to say that, despite the increase in readership and the magazine now being published 8 times a year (they had NOD beat – 6 is almost more than I can manage), he remains the only staff member. He gives thanks to the help provided by Gary Jaquet, but explains that he can only do so much because he lives 4 HOURS away. Boy, have things changed for the better. The editor for Blood & Treasure lives across the continent from me, and he might as well be in the next room.

The other big announcement from Kask …  PUBLICATION BY THE DRAGON DOES NOT BESTOW ANY SANCTION OR APPROVAL TO ANY VARIANTS, VARIATIONS OR RULES INTERPRETATION.

Anyhow … what has the birthday boy in store for us today?

First up, we see an advert for the Third Annual SC Awards for Creativity in Wargaming. Some of the things that didn’t make the ballot include Bunnies and Burrows (for best game) and Jim Dunnigan (for design of Russian Civil War … you might want to check out his Strategy Page site for information on everything going on in the world of conflict). Lankhmar and Metamorphosis Alpha were up for Outstanding Game of 1976, Gygax’s Swords & Spells was up for Outstanding Miniatures Rules of 1976 and Grenadier’s wonderfully named Wizzards & Warriors was up for Outstanding Miniatures Series of 1976. They also list a Fantasy Gaming Hall of Fame, which includes Lord Dunsanay, C.S. Lewis, A. Merritt, Fletcher Pratt, Clark Ashton Smith, Poul Anderson, M.A.R. Barker, Lin Carter, L. Sprague DeCamp, Gardner Fox, Katherine Kurtz, Fritz Leiber, Michael Moorcock, Andre Norton, Jack Vance and Roger Zelazny – and I just cannot argue with such a list. Spot on for 1977.

Omar Kwalish (didn’t he invent some sort of apparatus?) presents tips on what to do when “… Calamity Befalls You Twenty Minutes Before the Game Club Gets To your Place”. In essence, the article shows how you can generate percentages with two standard D6, and other ways of dealing with being without dice – chits in a jar, random numbers generated on high-tech calculators (such as the TI-SR51-A), cutting cards (roll 1d4 with the suits, etc.), using a watch with a second hand, spinners, coin flips (an obscure study financed by government grant proved that the dime was the ideal coin to flip), phonebook and blindfold, etc.

Gary Gygax uses the Designer’s Forum to tell of the origins of the game, in which he writes, “Although D&D was not Dave’s game system by any form or measure, he was given co-billing as author for his valuable idea kernels.” Let the lawsuits begin.

Lynn Harpold describes Mystery Hill, America’s Stonehenge. A very ’70s article, if you remember that time period, and things like In Search Of.

One of Ral Partha’s new releases is “Foregum” Super Hero (Bare-Chested) – no picture, but he is now my favorite miniature of all time. Luckily, I found an image … 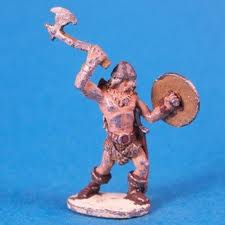 Great illustration by Morno on page 11, to go with his story The Journey Most Alone. Again – new rule of Dragon by Dragon is to post a random paragraph from the story, so …

“There he paused in wonder.”

Okay, that was a bit cheap, how about the next paragraph as well …

“Before him he saw the vistas of a wide universe from the height of a splendid cliff. Awaiting him was a massive throne of silver and of tortoiseshell, metalwork twining like vinery around the dark surfaces of the seat. Leaf and stem of silver entwined in ecstatic embrace, and here, upon the highlights, and there, among the shadows, gleamed jet and onyx, lapis and obsidian, nested like gleaming grapes in beds of many other stones. From this pinnacle Visaque beheld the five extremities of his cosmos and the many marvels therein; beheld amber castles and perilous beasts, paradise and power to his world’s edge. At the foot of the throne knelt spirits of the four elements and one awaiting his ascension. Tiny heralds on elven birds trumpeted a fanfare at his coming.”

In the middle of the story there is an ad by FanTac Games in South Orange, NJ for a new game called “Space Marines”. Looks like they beat the Brits to the punch.

M.A.R. Barker has a new article on Military Formations of the Nations of the Universe, recounting military formations of … well, you get the idea. The universe, in this case, is confined to Tekumel. 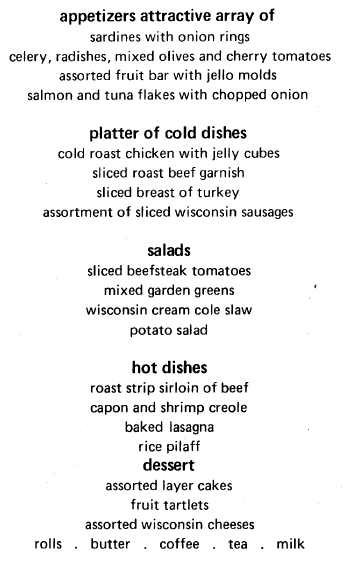 Honestly, they had me at sardines and onion rings.

The Featured Creature this month is the Prowler. Its B&T stats would be:

Tough monster, and a nice bit of art to go with it.

Fineous Fingers tries to rob a guy from TSR and ends up skewered, while the kid he was training gets a 1,000 gp reward for tipping off his target.

Mcewan Miniatures has a sweet little ad for their new figures …

I’d like to think all of those fellows would fit in nicely in a Space Princess game somewhere. Maybe the Terrellians are a species that has built their culture around the worship of this guy …

But that’s just me. (And yeah, that would probably make them Chaotic).

Mystery author Garrison Ernst (just can’t figure out who this guy could be) presents another installment of the Gnome Cache.

“A column of dark smoke announced that they were approaching the castlewick of Blackmoor. It was the morning of an otherwise bright day not long since the slaughter took place on the narrow road to Weal. The two had traveled fast. Several times they had quickly left the lance for the safety of the surrounding wood as a band of Nehronland foot or a rare body of horse passed northwards laden with plunder and marching with much jesting and laughter. Each time Mellerd would salute their passing with various rude gestures, for he daily came to hate all Nehronlanders more passionately as he missed the Kimbri Vardobothet whose death came at their hands. There was now a particularly thorny problem facing them. They could not, of course, proceed directly through the place ahead, for it was obviously swarming with enemy soldiers. To the east was a jumble of broken terrain stretching away for endless leagues towards the sea. Worse, it was the home of many of the various bands of Nehron, so passage through that place would be nearly as dangerous as going straight along the road through Blackmoor. But to the west was a trackless forest which led to the slopes of the Senescent Hills, most inhospitable and the dwelling place of creatures who did not welcome men intruding upon their domain. The trick would be to swing wide enough to bypass the fortress unseen by any of the numerous warriors thereabouts, and then come back onto a route south again. If they went east they would eventually make the road to Rheyton as they circled back. In the other direction they would strike the passage to the free city of Humpbridge which bent from southwest to south across the base of the Senescent range. Dunstan was faced with making a decision from what he remembered of maps and his experiences on the trek which brought them to these straits originally.”

The emphasis is mine. Humpbridge!

And so ends the seventh issue of The Dragon. If I’m honest, the ads were the best part of this issue – pretty weak on game content, and Barker’s article on military formations seemed endless. What I have learned, though, in reading these is that I need to start using multiple pseudonyms when writing NOD. Fake names, anagrams and bad puns are as much a part of the D&D experience as Armor Class and hit points, and I’ve been missing out!