The Caves of Llosh is a multi-part dungeon for the Pars Fortuna rules, for characters level 1-3 that I decided to publish here, piece by piece. I’m going to start doing the same for Space Princess and the Catacombs of Old Mars soon … let’s see how it goes.

[No Map Yet … Been busy but wanted to get this ball rolling, and the intro area is pretty straight-forward]
— 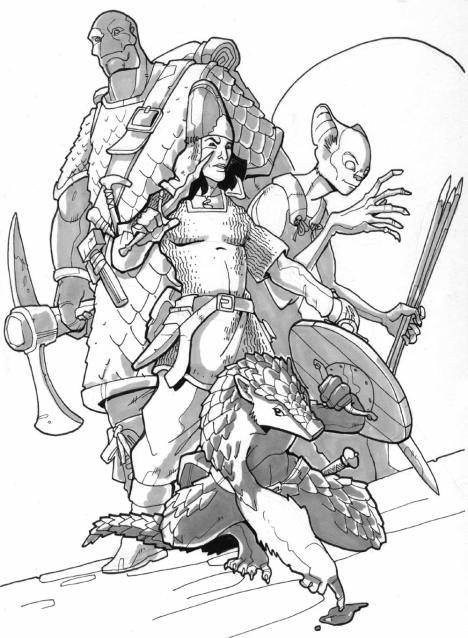 Well beyond the city of Viacrux and the Pyroxist Mountains, past the steading of the cyclopeans and to the west of the Titan’s Door, lie the Caves of Llosh, one of the many entrances to the infamous Spire that lies at the center of creation and, they say, offers one a chance to rewrite that creation if only they can climb to its pinnacle.

The caverns are accessed via a small cave in the base of a mountain shrouded in spiny ygoraa bushes that drip their maddening sap when the moon is full. The upper reaches of the mountain are stark and on the rocky ledges perch beady-eyed hraeths (giant ravens), who often attack adventurers making their way to and from the caves (3 in 6 chance, 5 in 6 if laden with treasure).

1-1. The entry cave measures about 50 feet wide and 70 feet long, and the ground and ceiling both angle downwards from the entry. The floor and walls have been worn smooth by dozens of adventurers who have dared the caves, and bits of graffiti are to be found chiseled into the walls, including a large admonishment to “Never Bite an Oort” and a plea to “Bow to The Dam”.

There are three exits from the cavern. One is a sinkhole with glistening walls (not wet, just a characteristic of the rock). The sinkhole has an opening about 15 feet in diameter – a sort of cone – with several iron spikes driven into the rim, and usually (2 in 6) a rope tied to at least one. About 20 feet down, the air becomes foul and difficult to breath (save or suffer -1 penalty to attack and save for 2 hour; or simply cover mouth and nose with a thick cloth), and about 40 feet down you might come across additional spikes driven into the walls, where people made a perch for themselves and tied off additional ropes. In all, the sinkhole is 80 feet deep and leads to chamber 3-1.

The next exit is a rather large cave mouth at the back of cave 1-1. The air in the mouth of this cave is quite chilly, and one can even see crystals of frost on the ground leading into it. This cave leads into a tunnel about 40 feet long, that winds back and forth gently and descends at a 15-degree angle to chamber 1-2. The tunnel is guarded by four cavern crawlers with mottled, white skin that allows them to blend in with the frosty tunnel (surprise on 1-2 on 1d6).

The final exit is hidden by an illusion, making it look like part of the east wall. It is a stone portal, large enough to be carved by bo’al, and bearing the tell-tale signs of their aesthetic (i.e. boring, angular, sturdy, etc.). Beyond the illusion (not the work of bo’al, but of a party of caledjula who long ago met their demise within the caves) there is a hallway about 10 feet long and an iron door (locked, trapped with an acid spray that deals 1d6 damage and has a 13% chance of ruining a thief’s lock pick). Beyond the iron door there is a spiral stair that leads down about 30 feet to chamber 2-1. This engineering feat was a result of a party of bo’al being guided by a prophetic dream, and breaching the second level of the dungeon from a pathway its inhabitants never quite expected.