Let’s review, for a moment, the cleric.

The cleric was the original middle child of D&D – stuck square between the magic-user and fighter in terms of spell use and fighting ability – and the first class born from play, rather than the Chainmail rulebook. Legend has it that Sir Fang, a vampire character (yes, monster characters are as D&D as apple pie is American), was proving troublesome, so somebody decided they needed a Van Helsing* to deal with the rapscallion.

* Side Note: If you want to thoroughly understand the undead of D&D, you need to watch the Universal and Hammer horror films. Never understood the whole “vampire energy drain touch” thing? Watch Captain Kronos. You’ll understand. Plus Caroline Munro …

So, the cleric, as it was introduced into the rules, became a mix of Van Helsing vampire hunter and medieval bishop-of-war, with the stylistic emphasis on the latter rather than the former. Who were these battling bishops of the Middle Ages, you ask? Read on … 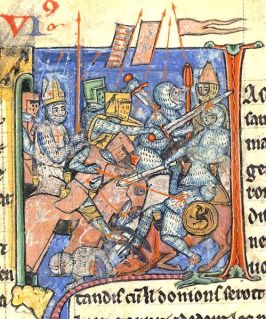 Adhemar (totally made up name, right?) hailed from France, and he plays an important part in the First Crusade. You can see him to the right, wearing the mitre*

* Side Note: If your 9th level cleric doesn’t enter dungeon fully armored and wearing a mitre, he should be stripped of his clerical powers and forever consigned to being a second-rate fighter. No Lawful or Chaotic deity worth his salt should forgive the sin of “awesome headgear aversion” in his followers.

He was paired up on the crusade with a bunch of stupid fighting-men who quarreled all the time over leadership, but managed to keep things focused with his spiritual leadership throughout the ordeal. When he died (probably of disease*), some claimed that he pulled the old Obi Wan trick (remember, Star Wars was a “long time ago”, so it technically occurred before the First Crusade) and returned as a ghost to cheer the foot soldiers on.

* Side Note: Died of disease? Hello! Cure disease – low level spell – what’s the deal? Well, it turns out that many of these bishops, uninformed of the D&D rules, used edged weapons and thus were unable to cast spells. Fortunately, fighting bishops of the future will be forewarned.

Half-brother to William the Conqueror (a 9th or 10th level fighting man in his own right), Odo has one of the great names in the history of names (but far behind this guy). In fact, whenever I’m writing high-level clerics in a medieval milieu, it’s all I can do to avoid naming all of them Odo.

Odo is a little more “traditional D&D cleric” than the others, or at least pretended to be. Apparently, the Bayeux Tapestry (according to that shining light of accuracy Wikipedia) belabors the fact that he did not actually shed blood during the battle, and he is pictured armed with a club rather than an edged weapon urging the soldiers to battle – perhaps with a bless spell.

Odo also, apparently, gained his fortune by killing things (well, people) and taking their stuff, which I think cements him as a true D&D cleric, albeit a chaotic one. He joined the First Crusade (see above), but died before he actually got there, thus robbing the crusaders of some very useful cure (or cause) wounds spells. 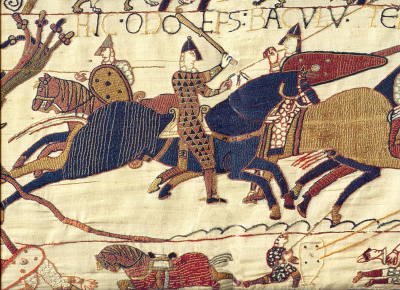 Turpin is no mere bishop. He’s an archbishop (so, 12th level, I guess). Turpin lived a few centuries before the other two in this post, and he was one of the Twelve Peers of Charlemagne and a pal of Roland. Some of the legends of Turpin might be confused with his predecessor, Milo, a “warrior clerk” (i.e. cleric).

In any event, Turpin was a bad-ass, and he wielded a magic sword called Almace (“Almighty”) that may have been forged by Wayland (the god-smith, not the puppeteer). A comparison of the three magic swords of the romances of Roland declared Kurt the least, Almace the second and Durendal the finest, so naturally I’ll assume Kurt is a +1 sword, Almace +2 and Durendal +3 (it’s science, dude).

6 thoughts on “Three Bad Bishops, You Know So Well”