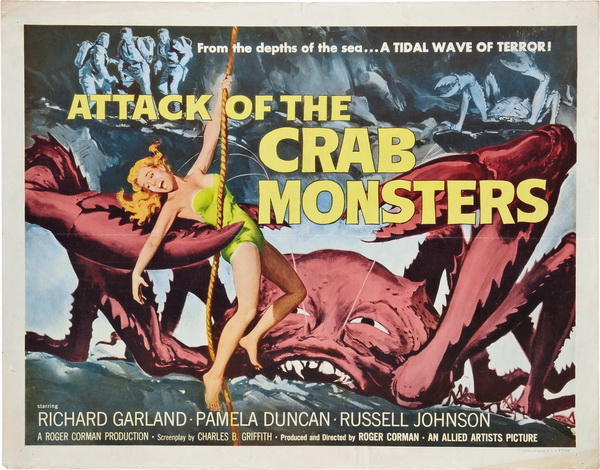 I’m working my way through the public domain sci-fi/horror movies on Pub-D-Hub, and last night I took in Roger Corman’s Attack of the Crab Monsters (1957).

Spoilers are a comin’, so be warned.

The combination of “Corman” and “Crab Monsters” doesn’t fill a person with much hope. The monsters, I assumed, would either be men in rubber suits or green-screened crabs made to look giant harassing a bunch of strangers, etc. I have to say I was pleasantly surprised. It is a movie in the sub-genre of “group of people menaced by monsters, dying one by one”, but had some pretty clever details – oh, and one of the characters is played by Russell Johnson, better known as the Professor on Giligan’s Island!

The “crab monsters” in the title weren’t what I expected. They were giant crabs altered by atomic tests on an island. As it was described in the movie, they weren’t just enlarged crabs. Their atoms had been detached from one another in such a manner that they were in a semi-liquid state – liquid given a permanent shape. Their weird atomic structure has given them additional abilities. When the crabs consume people, their atoms simply join the crab’s atoms, making them a sentient part of the crab. Several people’s minds and memories can exist within the crab simultaneously, and though they retain their memories, their personalities change. They now seek the continued survival of the crab, even if that means killing former friends. The crab’s are also capable of transmitting telepathic messages via bits of metal, these messages being in the voice of the people that have absorbed. The crabs can regenerate body parts and generate significant amounts of heat, but electricity turns them quickly to dust.

The giant crabs, there are two in the film initially, are intent on destroying their island to keep people from discovering their existence. One of them is “with child”, and once the crabs have increased their numbers under the waves, they plan on expanding their dominion. They are destroying the island using dynamite they have captured from the various groups of soldiers and scientists that have come to investigate an aircraft that crashed near the island.

Naturally, a monster this creative needs some game stats!

Crab monsters can generate heat in a radius of 30 feet. This can be done three times per day and 10 minutes at a time, and all in the radius suffer 1d4 points of damage per round. Metal in the area of effect is affected as per the heat metal spell.

When a crab monster consumes a person, they add their mind to their own. These minds remain independent, but are now part of the crab and work for the crab’s survival and interests, even turning on former allies. The crab can correspond telepathically using the voices of the people it has consumed. Increase the crab’s Mentality score to that of the highest Intelligence it has consumed. Any psychic powers possessed by a person consumed by the crab monster are now possessed by the crab monster.

Crab monsters are immune to fire and heat, and suffer only half damage from lasers and ray guns and from physical attacks. Electricity attacks inflict double damage on them. Crab monsters absorb the KNO and MEN of people they consume, increasing their values to the highest value they have consumed. They also absorb the psychic powers and knowledge-based skills of people they consume, though they might not be able to use these skills due to physical limitations. Crab monsters communicate telepathically using the voices of the people they have absorbed. This telepathy can only be heard through metal.

7 thoughts on “Monster Matinee – Attack of the Crab Monsters”