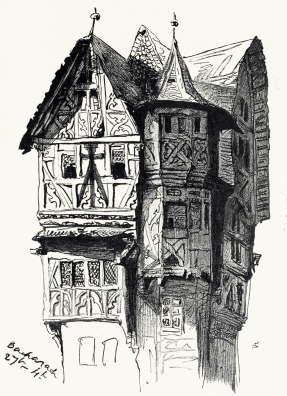 Writing up a couple sections of Blood & Treasure today. Came up with this table of events for high level characters ruling a domain.

Each month, the Referee should roll 1d6, a roll of 1 indicating that some random event has occurred. Determine the event on the table below by rolling d%:

ROLL EVENT
1-10 Arrival of a yeoman family looking for 20 acres to farm.
11-18 Departure of a yeoman family.
19-24 Arrival of a professional and his family looking for work.
25-30 Departure of a professional and his family.
31-36 Arrival of a mid-level (1d4+3) character wishing to pledge his loyalty to the lord or lady in exchange for 40 acres of land.
35-40 Departure of a vassal and his family.
41-46 Arrival of 3d6 pilgrims looking for succor. Roll their alignment on 1d6 (1-2 = Lawful, 3-5 = Neutral, 6 = Chaotic). They expect one night of hospitality from the lord.
47-49 Arrival of a tribe of humanoids looking for plunder and war. Use humanoids common to the area.
50-54 Arrival of human or demi-human lord and 2d6 followers looking for hospitality. The lord brings a valuable gift and expects to stay for 1d4 weeks.
55-57 Arrival of human army looking for conquest. The army should be powerful enough to challenge the lord or lady’s army.
58-60 Arrival of demi-human army looking to rid their land of the lord and his followers. The army should be powerful enough to challenge the lord or lady’s army.
61-63 Arrival of undead plague in village. Roll 1d10: 1-3 = Ghoul, 4-6 = Wight, 7-8 = Wraith, 9 = Spectre, 10 = Vampire.
64-66 Arrival of powerful monster in wilderness. The monster should represent a strong encounter (see Monsters below) for the lord or lady of the domain and his or her most powerful followers.
67 Ill weather ruins crops. No agricultural rents will be collected this year and food must be imported to keep people alive. If food is not imported, all yeomen and professionals leave and all serfs attempt to escape. Vassals have a 30% chance of leaving their lord or lady’s service. There is a good chance that the ill weather was caused by a monster or rival spellcaster
68-69 Arrival of king’s herald, demanding the lord and his knights go off to war.
70-74 Arrival of diplomat from neighboring fief offering alliance through marriage or demanding satisfaction for some real or imagined slight. 50-50 chance of either.
75 Earthquake damages castle. There is a good chance it was caused by a subterranean monster or rival spellcaster.
76 Comet sighted! The lord will suffer bad fortune for remainder of the year until a pilgrimage is undertaken to the nearest temple or sacred site and a sacrifice worth at least 1,000 gp per level of the lord or lady is made.
77 A member of the lord or lady’s family or retinue dies suddenly and mysteriously. There is a good chance it was caused by a monster or rival spellcaster.
78-80 A mine is discovered on the periphery of the lord’s holdings. Roll 1d20 to determine the product of the mine: 1-12 = base metal, 13-14 = copper, 15 = silver, 16 = gold, 17 = platinum, 18 = fancy stones, 19 = gems, 20 = jewels. There is a 50% chance it was discovered by the lord’s agents. Otherwise, it was discovered by prospectors who work it in secret.
81-85 Bandits plague the fief, hiding in the wilderness.
86 Pregnancy in the lord or lady’s family (ignore if circumstances do not lend themselves to such an event).
87-91 Arrival of traders who wish to set up a market. The traders bring with them exotic goods and useful news of the world.
92-96 Arrival of entertainers who wish to put on a show. There is a 1 in 6 chance they are not what they seem to be.
97 An inhabitant of the fief receives a mysterious vision.
98 There is an assassination attempt of the lord or one of the members of his family or retinue. The assassin has a level equal to to their target.
99 The lord or a member of his family or retinue is cursed by a high level spellcaster or monster.
100 A valuable item is stolen or a member of the lord’s family or retinue is kidnapped by a high level rival or monster

I tried to make sure that many of them are really just adventure hooks in disguise.

2 thoughts on “Random Domain Events for Blood and Treasure”