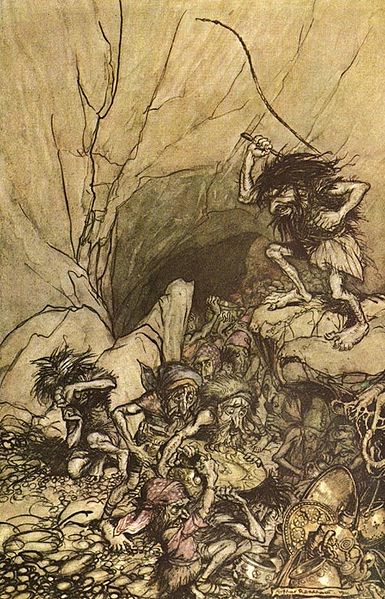 I’m about three days away from finishing the main writing on the Hell South hex crawl for NOD 12. Then I have a few articles to finish up and should be able to publish before Christmas – or maybe after Christmas. We’ll see.

10.72 Anemone Shelf: Hundreds of brightly colored giant sea anemones are attached to a wide shelf along the bank of the Acheron, about 70 feet below the surface. Equally colorful nixies dwell within these anemone, sometimes falling prey to them, but more often tending them. The nixies are led by the druid Anwyla, whose sea cave lair is hidden by the anemones. Deep within this sea cave there is a bubbling fountain of air. Bathing in this air, which carries a damp, green smell, one becomes a creature of living water. While in this form, the person can swim at a speed of 30 and is immune to cold and resistant to fire. This state lasts for a number of hours equal to the person’s constitution score.

35.99 Bothaaa: This hex holds the lair of Bothaaa, a giant, fiendish octopus spawned by Dagon himself. Bothaaa is usually in his sea cave, studying his greatest treasure, a jar that holds the preserved head of the Rivana, youngest daughter of the lich lord Piran. This head wears a crystal diadem (worth 1,000 gp). It is still alive, the body resting in Guelph in an ornate crypt. The head is sought by Dudge, the chaotic knight currently trapped in the stomach of the dragon whale Oraguldurn [7.63].

9.66 Grimserne: Grimserne is the dark city of Alberich, the king of the nyblings, a race of sorcerous, demonic dwarves. The nyblings are sore put upon by Alberich, and the shade slaves of Grimserne even more so.

Grimserne is home to 5,000 shades and 3,500 nyblings. The city is built into the sides of a massive and ever deepening pit mine from which the slaves extract copious amounts of coal, enough to fire the furnaces of Dis. The nymblings direct the slaves in their mining and then form them into great caravans who march towards the palace of Minos and the narrow stairs that lead down to the third ring of Hell. Each shade holds 300 pounds of coal in its back in canvas and leather sacks, and by the end of the journey to Dis are so spent that they often melt into the landscape, only to emerge back in their pit a few days later.

Alberich is a mighty sorcerer among dwarves. He and his people possess an unheard of skill at forging magical items, making them as easily as most craftsman make normal items, but expecting cruel payments for their handiwork and cursing the items to make sure they are not betrayed.

11.70 Prison Farm: The damned souls of 450 greedy halfling farmers toil here on a vast field, farming and tending animals under the poisonous whip of the balor Enkepis and his manes. The halflings grow bitter kale, lima beans, Brussels sprouts and pumpkins that grow to about four feet in diameter and bear tormented faces on their pale orange skins. They also tend sheep that they turn into spicy meat pies that are valued throughout Hell.

Each of the pumpkins, if one should carve a hole into it and crawl inside (gnomes and halflings can manage this) is a portal to the surface world.

13.57 Peat Fields: This hex was once a great swamp of tsetse flies and stinging nettles. It has since been drained and is now a great expanse of peat fields. Miserable shades now roam the fields, cutting the peat under the watchful eyes of gnoll overseers. The peat is destined for the lodge of Barbatos, who disdains the use of coal and thornwood. The peat moss is rank with worms, each one with the face of a damned, miserable soul.

Image by Rackham; found at Wikipedia.

5 thoughts on “The Glooms – Evil Pumpkins and Dwarf Kings”