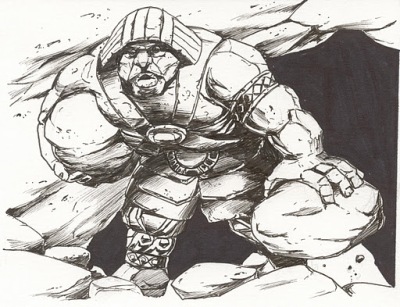 Another quickie preview. Soon, I’ll be previewing some art for Blood & Treasure!

92.99 Criosphinx: A talkative, obnoxious criosphinx has set up shop here on a ledge about 500 feet above the ground. The ledge leads back into a natural amphitheater and several shallow mines dug ages ago by kobolds searching for gold. They finally quit when one group of miners struck an underground river, which flooded the mine and formed a waterfall for years. Eventually, the river shifted and the ledge and mines are now dry and worn very smooth.

99.95 Hidden Ropers: The landscape here contains an old stone road that descends into a deep canyon. The walls of the canyon are streaked with deposits of gold and marred by many ledges and shallow caves that spout clear, fresh springs. The springs empty into rifts in the canyon floor, keeping it from filling with water. The ledges in one mile-long stretch are occupied by several ropers that are hidden beneath a hallucinatory terrain effect created by a duergar magic-user who wants to keep the gold safe until he is ready to clear the canyon of ropers.

102.96 Stone Golem Inn: A band of enterprising svirfneblin have established a rollicking good inn here. The inn is set about 40 feet above the ground in an abandoned cliff dwelling that looks to have once belonged to mantari.

Standing beneath the inn there is a stone golem that has the appearance of a great ape with pearly eyes and upward jutting fangs. The gnomes have nicknamed it “Ook”, and are apparently capable of commanding it, perhaps by dint of their now owning the cliff dwelling. The stone golem is the only means of accessing the inn other than climbing the walls or flying in, and the gnomes only grant access to folk who appear to be no danger and who are willing to dance a lively jig for the entertainment of themselves and their customers.

The svirfneblin number four ex-adventurers and their significant others and children; there are twelve in all. They serve a passable mushroom brew using fresh water that falls down the back of the inn (a subterranean waterfall) and serve thick mushroom steaks and anything else they can get their hands on.
The inn has ten small rooms (15 gp a night), or folks can stay in the common room for 3 gp a night.

107.102 Cracking Ground: The ground here cracks and juts up at random intervals, presenting a terrible hazard to travelers (1 in 6 chance per hour of being struck for 8d6 points of damage). Amidst this chaos, there rests the magnificent Throne of Glooms, a simple throne carved from basalt (and quite rough) and set with three dozen onyx (1d6 x 100 gp each). Each of these stones holds an ethereal shade, who can emerge if a living person sits in the throne. The person is stuck fast to the throne while it drains away their charisma (1 point per round). They can only escape the throne with an open doors check, though the shades do their best to prevent this.

As a person loses their charisma, the color gradually drains away from their skin, eyes and hair. When their charisma is drained to 0, the person transforms into a terrible creature called a gloom, the genius loci of the Glooms, so to speak. At this, the terrible eruptions of the hex end and the ground becomes perfectly smooth and placid.

The newly created gloom will expect its former comrades to become its avid worshippers and help it to facilitate the re-conquest of its domain.

2 thoughts on “The Glooms – A Sphinx Says What?”