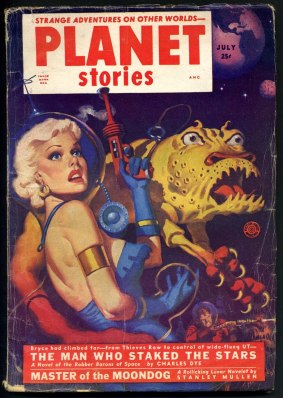 Here’s where species (not races – that hasn’t been the right word for about a century now) currently stand in Space Princess.

Human
Human characters have no special bonuses or penalties, but they do begin the game with one extra Destiny Token to help them get out of dangerous situations intact. Humans begin with a standard Defense Rating of 10 and a standard Movement Rate of 40.

Android or Gynoid
Androids are sentient robots that generally resemble males, while gynoids are sentient robots that generally resemble females. Of course, your android character can look however you like – it need not even be humanoid in configuration, although such a shape could influence how it interacts with the environment in the game (i.e. it is unable to climb a wall because it has no arms or legs, etc). Androids are immune to mental domination, fear and poison. Androids have a standard Defense Rating of 12 and a standard Movement Rate of 40.

Alien
Aliens come in a variety of different shapes and sizes. You can either invent your own alien species on the spot, or your Referee might provide you with a selection. Aliens have a standard Defense Rating of 10 and a standard Movement Rate of 40, unless otherwise stated below. Aliens are built as follows:

Crustaceans: Crustacean aliens have a thick carapace that grants them a standard Defense Rating of 12. The player can choose to give them pincers in place of normal hands. These pincers make it difficult for them to handle ray guns (-2 to hit) and perform acts of fine manual dexterity (-10%).

Fungoids: Fungoids have thick skin and their lack of internal organs makes them resistance to damage, giving them a standard Defense Rating of 12. They are immune to poisons not designed to kill fungus (i.e. fungicides) and their alien intellects give them a +10% bonus to resist mental domination and fear.

Insects: Insect aliens have chitin that provides a standard Defense Rating of 11. Their powerful mandibles add +1 to their damage when engaged in unarmed combat.

Mammals: Non-humanoid mammals might resemble other members of the mammal kingdom, from dogs to cats to elephants and gazelles. They have thick fur or skin that gives them a Defense Rating of 11 and their natural weaponry (claws, fangs, antlers) add +1 to their damage when engaged in unarmed combat.

Mollusks: Mollusk aliens that can leave the water are usually covered with a mucus membrane that makes them difficult to grapple in combat (-2 to the attempt). Their tentacle-like limbs make them expert grapplers (+2 to the attempt).

Plants: Plant aliens have the same general benefits as Fungoids.

Reptilians: Reptilian aliens have a standard Defense Rating of 11 due to their scaly hides. If deprived of warmth, they become sluggish and their Movement Rate is cut in half. A reptilian’s natural weapons (fangs, claws) grant it a +1 bonus to damage when engaged in unarmed combat.

Silicon-Based: Silicon-based life forms are essentially living rocks. Like androids, they might take almost any form the player can imagine, with the same consequences. Silicon life are immune to all poisons and seemingly require no sustenance to stay alive. They have a standard Defense Rating of 12, but their standard Movement is reduced to 20.

2. Choose One Special Ability: You can add an additional special ability by permanently spending one Destiny Token.

Ability Bonus: The alien can improve one ability score by +2.

Bulk: The alien is especially bulky and heavy, making it difficult to knock over in combat.

Climbing: The alien can climb walls and ceilings as easily as it walks on a flat surface.

Hearing: The alien has hearing well beyond that of human beings.

Infra-Vision: The alien can see in the dark via infra-red radiation – in essence, it sees body heat.

Leap: The alien can leap up to 20 feet in any direction.

Mind Control: Whether by hypnotic eyes, intoxicating spores or simple brain waves, the alien can attempt to impose its will on others. The target of the mind control can make a Mentality saving throw to negate the effect. The mind control makes the victim believe the alien is a good and trusted friend. The alien cannot use the mind control to order the person to kill themselves, and orders that seriously counter the target’s personal beliefs (like having them attack a loved one or betray a very valued cause) allow them a second saving throw to shake off the control.

Multiple Arms: Multiple arms allows the alien to hold more objects than normal and to make one additional attack during combat.

Stunning Grasp: The alien can stun others with their touch. They must make a normal, unarmed attack in combat to make contact. The victim suffers normal unarmed damage and must pass a Mentality saving throw or fall unconscious for one combat round.