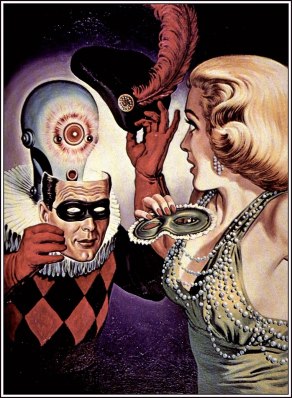 When Dr. Van Voort built his first android, he garbed it as a harlequin in order to demonstrate it at the 5th annual Conference on Advanced Thinking Machines. After years of labor and invention, he had created the first robot that could think on its own and move in such a human-like manner that, when equipped with false flesh, it was indiscernible from an actual human being. And then, in the still of the night, chaos.

While some have suggested it was a mere glitch or bug, Dr. Van Voort always maintained that it was an act of sabotage. In this, he was actually correct, though his accusations against his colleagues were unfounded. In truth, the mechanical man with the human face drew the unwelcome attention of an from a parallel dimension called the Lord of Madness. On the night before the conference, Harletron 3000 pulled on his mask and crept out the window.

Naturally, Dr. Van Voort was beside himself. He couldn’t bring himself to attend the conference, but imagine his surprise when his android did. As the assembled scientists demonstrated their newest advancements, the android struck, carrying away any number of advanced components. Making its escape, the robot, dubbed Harletron 3000 by the press, established himself in an abandoned factory in Shore City’s industrial corridor and installed the components. Eventually, Harletron 3000 would be cornered by the Golden Gladiators and plunged into freezing water. Though thought destroyed then and on other occasions, Harletron continues to show up again and again to challenge Earth’s heroes, always attempting to improve itself with stolen technology or sew the seeds of chaos and madness on Earth.

Image from Golden Age Comic Book Stories. Harletron 3000 will be appearing soon in NOD 9 as a minion of the Black Dragon in the adventure Washed Out in Washoe. Assuming I finish writing the darned thing.