Found HERE – What the heck is going on here, and who wants to work up some Mystery Men! stats for, well, any of it? You know what I do like about that cover, though – it was not done ironically. Now we have many people trying to manufacture weird, consciously, where as once upon a time that was not so common. In other words – what’s more interesting – the person (and culture) who drew that cover or a hack like Lady Gaga who goes to great pains to be “shocking” and “weird” in the most lucrative manner possible? Or was that cover artist just pissed that he was making a living drawing a comic book cover instead of living his dream as an artiste’, so he decided to go all “subversive”? Discuss.

Bonus knowledge – jeeps got their name because they were designed as General Purpose vehicles for the military – GP – Jeep.

Reskinning the Past Department 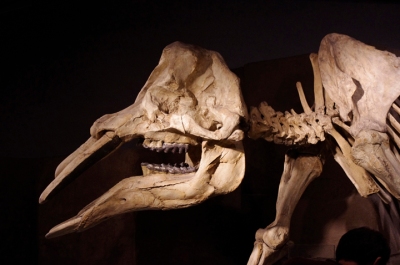 So, we’re probably all aware of people who make their living by taking the skeleton of a long extinct animal and drawing in the musculature and skin to give us an idea of what it looked like when it was alive. Which is interesting, if you think about it – most folks these days think we know what a t-rex looks like, but in truth nobody really does – not even scientists – and we never will. Anyways – has anybody ever thought of taking a modern animal skeleton as a base, and then designing an imaginary creature around it. The above skeleton is probably a bad example, since I think it’s an extinct species of elephant. Either way – could be a fun artistic exercise or blog contest.

Sick of the Rapture Department

Here’s a picture of a woman being carried away in a bubble. No relation.