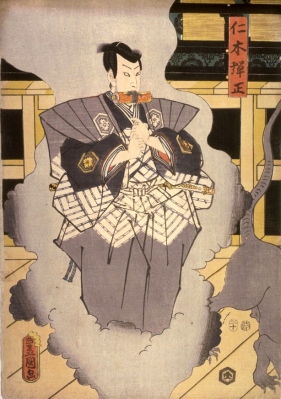 So begins the day of too many posts! First up – another encounter for Mu-Pan. Later, I wade into the ABC challenge thing and later I’m going to post a few new monsters for Ruins and Ronin.

1611. A number of winding catacombs are dug into the side of the mountains here. The catacombs run for several miles, have arched ceilings and are lined with shelves (3 feet off the ground, 3 feet deep). The floor of the caverns are cut to allow water to flow down the center, and small streams do run from the catacombs. The entrance to the catacombs is protected by a bronze portcullis that can only be opened by playing a hunting melody on a bamboo flute (or by physical force – requires 2 hours of pounding with weapons or a combined strength of 60 to pull open).

The catacombs contain numerous skeletons wrapped in leather and tied with silken cords. Several of these bodies seem to shift as one walks past them – a trick caused by thin trip wires. At each juncture of the catacombs, there hangs a bronze temple bell by a red cord. When a bell is passed without being rung, the corpses in the tunnel the adventurers have just left animate as skeleton warriors, crawling from their wrappings and relying on their claw-like finger bones to attack. There are 1d10+7 skeletons in each tunnel. Ringing a bell after the skeletons have animated does nothing.

The main inhabitant of the catacombs is Bzisfisihm, a poet and high priest of the shamshir who died over 1,000 years ago. His main tomb is located in the center of the catacombs. The tomb is preceeded by an antechamber with three red doors. The center door leads into a small chamber with a collapsible floor. Beneath the floor is a stone chute that is both covered in oils and embedded with shards of glass. Those falling down the shaft suffer 2d6 points of damage minus their total armor bonus. They are deposited in a small stone tomb, already piled high with bodies.

The other two doors lead into the tomb proper. The tomb is clad in red stone and features a white, marble dais in the center surrounded by a dozen terracotta warriors. Atop the dais there is a gaudy sarcophagus of marble and brass containing the body of Bzisfisihm wrapped in red silk and tied with golden cords (worth 100 gp). Set in the mummified remains of the high priest there is a tiger’s eye gem. This gem contains the high priest’s spirit, which can leave the gem to inhabit and animate the terracotta warriors.

The lid of the sarcophagus is heavy, requiring a combined strength of 30 to lift and move about. If placed flat on the floor, it becomes a doorway into a pocket dimension containing the high priest’s treasures. The pocket dimension appears as a stone staircase descending 100 feet and emptying onto a small island seemingly floating in space. The “walls” of the island, though invisible, do exist, and strange creatures can be seen beyond those walls, some noticing the adventurers and moving to glare at them from the walls, like curious children or hungry dogs.

This island/room contains a stout, iron chest embedded with 2-inch long spikes. The chest is locked and trapped – should one walk away from the chest, it fires its spikes throughout the room (1d4 attacks person from 2 HD creature, 1d4 damage each), accompanied by a blinding flash of light (save or blinded for 1d4 hours). Inside the chest there are a number of large aquamarines – one for each adventurer and two of each shape – circle, oval, square, triangle, etc. Each aquamarine is worth 500 gp, but they are cursed. The two holders of the same shape have their spirits switched – in effect, the players trade character sheets. The only way to switch bodies back is to bath in foamy surf of the Sea of Stars at sunset.

One thought on “Mu-Pan – Encounter XVIII”