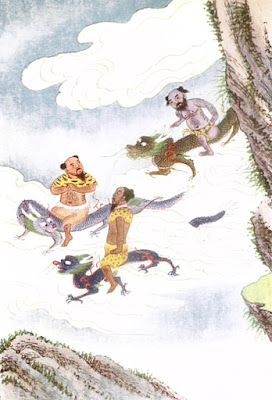 1025. A flock of seven cheonma have made an aerie for themselves on the high peaks here and are under attack by a pack of five griffons. The cheonma are hard pressed and they have already lost two foals to the depredations of the griffons.

1027. A gang of 20 gyres is occupying a cave here, using it as a base of operations as they raid down the river into Yun territory. The leader of the gyres has a single white eye and particularly long canine teeth. He wears a golden ring on one of those teeth (worth 15 gp) and can cast 1d6 levels of sohei spells per day. The gyres wear coats of leather scales and wield masakaris and kamas. If encountered in their lair, there is a 2 in 6 chance they are drunk on plum wine. Their treasure consists of 340 sp and 1,130 gp in leather sacks. The stripped bones of two unlucky farmers are piled in the back of the cave.