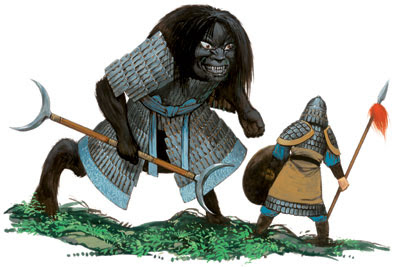 0824. A stone tower made of golden bricks leans over dangerously from the side of a low mountain covered in a tangle of brambles. The tower is the lair of a wang liang and his foot soldiers, 40 oni-yama. The wang liang owns an enviable library of bamboo scrolls on every imaginable subject, though every single one of them is filled with nothing but lies and half-truths. One of the scrolls contains a number of spells that appear to be one thing but are in fact another: Charm person (actually light), invisibility (actually levitate) and alter time (actually lightning bolt).