One more before I post the update to Megacrawl 3000 … 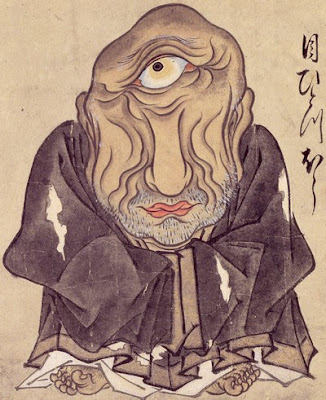 0443. Three one-eyed boys (hitotsumi-kozo) dwell in this hex in a cave studded with sapphires (worth 100 gp each, a total of 23 are present). The cave is set in the side of a long hill, the base of which is cluttered with goji berry bushes. The one-eyed boys gather the goji berries and mash them into juice that they ferment in clay pots buried in the floor of their cave.

Although removal of the sapphires is very tempting, it is a dangerous thing to do. If a sapphire is plucked from the wall of the cave, a blue ray erupts from the wall and strikes the person holding the sapphire (no roll needed). The ray always strikes the person in the forehead and sets up a communication between the thief and something from beyond the void (per the contact other plane spell). The experience leaves most people a bit jumbled (1d8 points of ability damage spread between intelligene, wisdom and charisma as the player prefers). This damage can be healed with magic (restoration), but will not heal naturally.

Also – to avoid confusion when talking about the Cloud Dragon, Gold Dragon etc kingdoms and the monsters of the same names, I’ve given the kingdoms alternate names:

Of the kingdoms, Meng no longer exists (at least, not in a normal way), its citizens now serving as the empire’s merchant class based in the coastal cities.