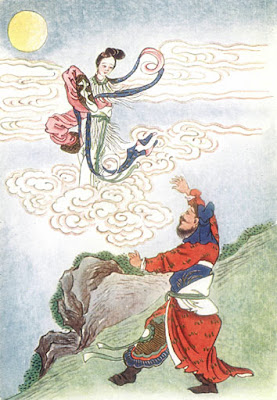 Missed a day, so two Mu-Pan encounters today. Just click on the Mu-Pan tag at the end of the post to find other posts, including a map.

0129. A small village of loutish hunters is located in this hex, surrounded by a stone wall and four stout towers. The hunters are mainly trappers, setting snares in the mountain passes and wooded crevasses in the spring and summer and then retiring into their village to smoke their pipes and chew eat pickled meat. The villagers are skilled gamblers and even more skilled archers. Their greatest treasure is an opal jar that contains the imprisoned soul of an oni. The jar is kept in the crypt of the former ruler, a tsanjani monk that made a habit out of chaining the maidens of the village to the walls of his shrine and watching them slowly starve. The villagers do not miss the man and have done their best to prevent the tsanjani from discovering the death of their reeve.

0213. A large village of tsanjani peasants cultivates edible fungus in the steamy caves that line the walls of the valley. Pungent streams of piping hot water emerge from these caves and spill into medicinal pools, eventually finding their way into a gentle stream that flows into the valley of the qal. The village is surrounded by an ancient, weathered stone wall caked with sulfur. The village is ruled by an overbearing magistrate of the tsanjani named Quatherennee. Quatherennee has pale yellow skin, stubbly gray hair and steel-gray eyes. The village is defended by two companies of men-at-arms (archers and heavy infantry) as well as semi-tamed white babboons. The babboons are chained near the village’s large iron gate and outside the magistrates court. Patrols of warriors always use one or two babboons as scouts. Visitors can hire out Shoolinsth the piao-ke (armed escort) to guide them through the mountains.

One thought on “Mu-Pan – Loutish Hunters”