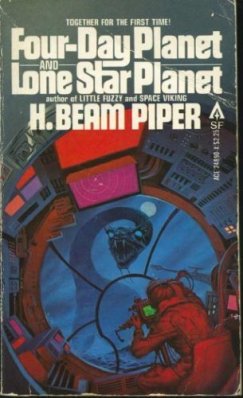 I just finished listening to an audio book of H. Beam Piper’s Four Day Planet on LibriVox. I’d never heard of Piper before, and really just picked the book at random from a list of sci-fi titles that had recently showed up on the site. Of course, that’s the wonderful thing about the internet – churning up all sorts of wonderful (or even mediocre) stuff that you’ve never heard of and serving it up free of charge. Between LibriVox, the Internet Archive and GoogleBooks, I defy you not to stay entertained with a computer and hi speed connection. Anyhow …

Four Day Planet is not fine literature – it’s not even among the better scientifiction that I’ve read (or listened to, in this case). The dialogue is stilted, the plot is okay as it goes – nothing ground breaking, but told competently – and the characters are pretty wooden. So why would I recommend it? Because it strikes me as a wonderful “gazetteer” for games like Traveler – a really well realized and interesting setting for science fiction games.

The “four day planet” of the title is Fenris – inhabitable by humans, but only just. It has a four day year, spending half of it as a boiling hell hole and the other half as a frozen iceball. There is native life, mostly in the oceans, and humanity living in a large bunker-city. The main industry of the planet is the collection and sale of “tallow” – a waxy substance taken from massive sea creatures called “sea monsters”. The tallow is collected by monster hunters, guys who work on “boats” that act as both submarine and aircraft – in essence, futuristic whalers. What Piper lacks in storytelling or characterization, he makes up for in a fantastical-but-believable science fiction world and universe.

If you’re a Traveler player or enjoy semi-realistic sci-fi, I suggest giving this one a listen or read. You can also find it on Project Gutenberg or buy a copy at Amazon.