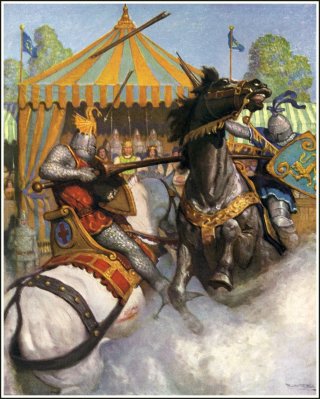 And to keep this post from being nothing more than me admitting to screwing up, I present another locale from Lyonesse and the story behind it:

Flying Duck: The Flying Duck tavern is a sociable, musical place with a spacious common room filled with numerous tables both large and small, a few private booths and a side room open only to folks who know the password (see below). The place is run by Teine, a plump, ivory-skinned man with chins hung like curtains and blue-black hair worn down to his shoulders (a wig made from the hair of a captured Saracen, an article made in the Venatian League) and dazzling, peacock green eyes. Teine is assisted by a bouncer called Labrach.

Teine is analytical and quirky, and fancies himself a scientist and mathematician. In fact, he does have some skill in these areas, and keeps a workshop in the cellar hidden behind some old barrels and casks. Teine is a music lover of the first order, and offers cheap food and drink to minstrels and musicians who agree to play in the tavern. For this reason, the Flying Duck has music from dawn to dusk.

The side room can only be entered by speaking a password in front of the door, which is only a door in the academic sense of the world, for to be completely accurate it does not exist and therefore cannot be opened by any outside agency. Speaking the world causes the door to fully exist and open, revealing a dusty, dingy room with a floor marked by dozens of footprints leading from the door to an old cupboard. The cupboard is a singularity, existing in several Flying Duck taverns spread across the Cosmos. One enters the otherwise empty cupboard, which can hold up to 10 people, and then closes the door. One then waits for a few moments, opens the door and exits into another side room in another Flying Duck. One determines their destination by intuition and feel, initially having a 5% chance to end up in the correct Flying Duck, increased by 5% for magic-users and those with a Wisdom of 13 or higher. Experienced travelers increase their chances by 5% for every five trips they take through the cupboard, but the chance of success never increases to more than 75%. The cupboard cannot be used more than once per week by a given person, so cupboard travelers get used to spending time in far away, strange places. The password to enter the side room changes daily, and can only be discovered via the contact other plane or wish spells.

About two or three years ago, I was running my players through NOD for the first time, specifically the region known as Thule (it was called Og back then). The group had just picked up a new member, Luke, and thus the party had just picked up a new character, Dakk the ranger. Dakk, we decided, hailed from Azsor, a barbarian city ruled by King Mogg and constructed around a massive waterfall. Once the group entered the city-state, I asked Luke where they should stay, since it was his hometown. Of course, Luke knew nothing about Azsor, but he’s that kind of player a DM loves – rolls with everything. He immediately announced that they should go stay with his parents. The party decides this is a good (and cheap) idea, and off they go. At this point, they (and Luke) discover that Dakk’s parents are dwarves (mom puts her finger to her lips and then whispers “He doesn’t know he’s adopted) and this launches a running gag that Dakk thinks he’s a dwarf – including Luke inventing his famous footy pajamas that his mom made for him that include a fake beard sewn into them. The group also discovers that Dakk’s parents are the Nodian, dwarven equivalent of Frank and Estelle Costanza from Seinfeld, and they soon decide that an inn might be more comfortable. So – where now? Luke pipes up with the Flying Duck – a name that struck us all as so odd that every inn the group visited in every city (including the Asian-style cities of Mu-Pan) became the Flying Duck. As a DM, I then made the decision that the Flying Ducks were all interdimensionally linked.

I bring this up for two reasons – first, to thank Luke DeGraw for being a great player who truly left his mark on my little campaign world, and also to show that the best campaigns are not written on reams and reams of paper, but grown organically at the table. To do this, you have to be willing to cede some control over your world to the players, and they need to be willing to cede some control over their characters to you and to one another, but it makes for things you all remember and laugh about.

2 thoughts on “That Wonderful "Oh Crap" Moment for a Writer”