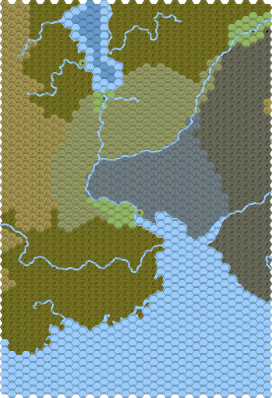 Here are six encounters for Western Venatia – hot off the presses – and the accompanying map.

0110. A crooked little stream flows from a high cave, forming a noisy little waterfall. The banks of the stream are bare of life because the stream is quite poisonous. The stream flows from a grotto, the walls and ceilings of which drip with poison. Well worn steps in the living stone protected by a large cave eel lead from the grotto to a little cavern, wherein dwells Eiois. Eiois is a bitter elven woman with eyes that stare like death and a once-pretty mouth whose corners have become down-turned. Eiois is a priestess of Eris, goddess of discord. Eiois worships at a jade altar that holds a crystal ball, through which she randomly curses powerful men in the region. She recently became infatuated with Fortunato, the Prince of Antigoon, and her fascination has caused her to plot against his enemies. She is now in a rage since the ball was stolen by a sneak thief (now deceased), who dropped his treasure in [0122].

0138. Vhalla is a small village of common farmers living in wattle & daub cottages surrounded by a bulwark of packed earth. Four wooden watch towers overlook the fields as far as the woods. The farmers are thickset, with nut-brown skin and aquiline noses. The men of Vhalla keep nimble forest cattle and grow cabbages and chanterelle mushrooms. They are an athletic people, holding games each summer to honor the gods, and are fine archers. Vhalla is ruled by the Lady Reana, who traces her line back to the elfs of old. Vhalla has the services of Ancho the Bowyer. The villages militia are armed with farm implements, and Reana employs four ogres from the mountains as her personal guard. In their off hours, the ogres challenge all comers to fights in a deep, brick pit near the village square and in sight of the gallows.
| Reana: HD 5 (19 hp); AC 3 [16] armored; Atk 1 sword (1d8); Move 12; Save 12; CL/XP 5/240. Elven chainmail, shield, longsword. Sharp featured but less so due to her girth, pallid skin, black hair and amber eyes. Precise mind, but a tad eccentric. Fancies herself a natural philosopher.

0147. A herd of 20 hippocampi graze the seaweed here. The leader of the herd is a stallion that once served as a paladin’s steed. Though his master is dead, the stallion still serves the cause of chivalry.

0233. One might find an ancient plaza here, now overgrown with saplings and ferns. In the center if the plaza is a large, malachite fountain decorated with tarnished brass hinds. The fountain is cracked and dry, and all that remains of the ruined town surrounding the fountain and plaza are crumbling foundations, a few shards of pottery and rusted utensils and tools. Should someone polish the brass sculptures and whisper a prayer to Diana, the fountain will come alive and a large falcon will soon appear in the sky, spiraling down until it lands on the edge of the fountain. This wise bird will answer a three questions (per Contact Other Plane) for the person who prayed.

0301. Cavemen of the lion clan live here in a large complex of caves. The 70 cavemen and their families are exceedingly primitive, arming themselves with clubs. Their lair contains a crude idol of a cave lion adorned with a cave lion pelt worth 150 gp. The cavemen are led by a boisterous man called Yok and his four brothers, Pudo, Kord, Gontor and Joro.

0339. A pack of 10 blink dogs hunts these woods. They detect the presence of intruders into their territory on a roll of 1-4 on 1d6, and will track intruders to make sure they mean no harm.